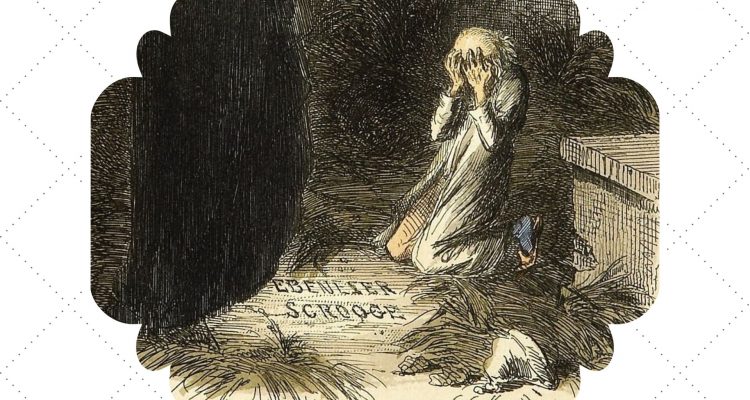 A Christmas Carol by Charles Dickens

Christmas Eves of my childhood were spent down in my Nana’s basement apartment, curled up on the couch, watching ‘A Christmas Carol’ by Charles Dickens on the black and white television. The family would gather around, sipping hot cocoa and being warmed by the fire in the old-fashioned brick fireplace, its mantel festooned with ivy. Behind the chain-mail screen, the flames would lick the large logs piled on the grate, painted blue and green by the treated pine cones tossed into the blaze. Even my father would wander in, sitting on the armchair by the fire, sipping on his glass of Crown Royal, uttering the occasional ‘Humbug’ for effect, although we all knew he was looking forward to the family festivities on Christmas day.

This family tradition of watching A Christmas Carol is older than I am. So how old is the story?

The First Edition of A Christmas Carol

On Monday, 20 November 1843, an advertisement appeared in the London Evening Standard to promote a soon to be published book by the renowned author Charles Dickens.

NEW CHRISTMAS BOOK, BY MR. DICKENS. In December, will be published, in small 8vo., with Four Coloured Etchings, and Woodcuts, by Leech, CHRISTMAS CAROL; IN PROSE. Being A GHOST STORY OF CHRISTMAS. BY CHARLES DICKENS. Price Five Shillings. Chapman and Hall, 186, Strand.

The work was published on 19 December and was an immediate success, selling six thousand copies that year before Christmas. There were eight stage adaptations of the story within the next two months but I’m sure that even Charles Dickens did not imagine what a tradition his story would become over the years. It has never been out of print since its publication in 1843.

LITERATURE. A Christmas Carol in Prose; being a Ghost Story of Christmas. By Charles Dickens. With illustrations John Leach. [Chapman and Hall, 1843.J Mr. Dickens has here produced a most appropriate Christmas offering, and one which, if properly made use of, may yet. we hope, lead to some more valuable result in the approaching season merry-making than mere amusement.

We need hardly add, after all we have said, that we hardly recommend this little volume as an amusing companion, and a wholesome monitor, to all who would enjoy in truth and in spirit “A merry Christmas and happy New Year.”

Twas quite late on the night before Christmas in London, England when Ebenezer Scrooge reluctantly gave his employee, Bob Cratchit, the next day off to spend with his family. After turning down a dinner invitation from his nephew and refusing to donate to the poor, he settled down for what would turn out to be a very long night.

Charles Dickens was one of the greatest writers of the Victoria age, penning not only A Christmas Carol, but others including The Posthumous Papers of the Pickwick Club, The Adventures of Oliver Twist, The Life and Adventures of Nicholas Nickleby, The Old Curiosity Shop, Barnaby Rudge: A Tale of the Riots of Eighty, A Christmas Carol, The Life and Adventures of Martin Chuzzlewit, Dombey and Son, David Copperfield, Bleak House, Hard Times: For These Times, Little Dorrit, A Tale of Two Cities, Great Expectations, and Our Mutual Friend.

Many of his works were published as serials in newspapers, common in the Victorian age when many could not afford to purchase a book, but could afford a newspaper or magazine.

Dickens was inspired to write A Christmas Carol, the classic Christmas tale, after reading the Report of the Children’s Employment Commission, which was published in 1842, after three years of interviews. A social critic in his time, Dickens perhaps sought, in his story, to give insight into the working life of the poor families and their children and to inspire his countrymen to give to the poor and relieve the suffering the children.

Charles John Huffam Dickens was born 7 February 1812 in Portsmouth, Hampshire, the second child of John and Elizabeth Dickens. When he was three, his father, who was a clerk in the Navy Pay Office, was called back to London, but shortly afterwards, they moved again to Sheerness and then to Chatham in Kent where they remained until Charles was eleven, when the family once more moved back to London. For some years, the Dickens family had been living well beyond their means and by the time Charles turned twelve, his father’s creditors had demanded repayment and with his mother refusing to extend him yet another loan, he was sent to the notorious Marshalsea debtors’ prison in Southwark. Charles, forced to leave his school and work in a factory, boarded with Elizabeth Roylance, an impoverished family friend.

After some months, Charles’ great-grandmother, Elizabeth Dickens died, leaving the Dickens family a sum of £450 which was enough to pay off the creditors, and John Dickens was released from Marshalsea.

Charles was later sent to the Wellington House Academy in Camden Town to complete his education and afterwards found employment as a clerk in the law office of Ellis and Blackmore, all the while indulging his love of the theatre. He eventually left the law offices to become a freelance reporter, working as a political journalist and got his first break as an author when he was hired to write a series of articles that became known as the Pickwick Papers. In between episodes, he married his fiance, Catherine Thomson Hogarth, daughter of George Hogarth who was the editor of the broadsheet, the Evening Chronicle.

In 1836, after finishing up the Pickwick Papers, Dickens began working on chapters of Oliver Twist for Bentley’s Miscellany with monthly installments being published from February 1837 to April 1839. Oliver Twist was a story about a poor orphan boy who fled the workhouse and forced apprenticeship for a life of petty crime on the streets of London. In 1832, the UK Parliament had commissioned a study on child labour in factories, publishing their findings in 1833 drawing attention to the poorest of poor children in society. Following on the heels of that report, the story of Oliver Twist became one of the bestselling novels of the Victorian era, highlighting, as it did, the plight of poor and orphaned children who became caught up in the new poor laws passed in 1834.

Dickens success as a writer continued to grow as he published several other works as monthly installments and at the same time, he and Catherine began their family with their first son Charles being born on 6 January 1837. They went on to have nine more children including Mary, Catherine, Walter, Francis, Alfred, Sydney, Henry, Dora and Edward.

In 1857, Charles Dickens met actress Ellen Lawless Ternan in London and that summer, he cast her in a play he was managing in Manchester called The Frozen Deep. Before long, the two became involved in a clandestine affair and the following spring, when Catherine inadvertently found out about her husband’s mistress, the Charles and Catherine separated. Charles and Ellen continued to keep their affair quiet, fearing the publicity, with Ellen living in houses bought by Charles under false names.

The End of an Era

Charles Dickens died suddenly on 9 Jun 1870 at the age of fifty-eight, leaving his literary heritage to the world.

SUDDEN DEATH OF CHARLES DICKENS. Charles Dickens is dead. On Wednesday night had an apoplectic attack his house Gad’s Hill, near Rochester, and remained insensible until Thursday evening, when died. Wherever the English language spoken or known this news will received with deep sorrow. If there was a man whose name was household word, it was Charles Dickens. books he may be said to have created a style—not perhaps the finest, in a literary point of view—but, in his hands, full humour and keen human interest. Each volume seemed to overflow with kindliness, and the charity which believeth good of all men.

Charles Dickens was buried in Abbey Church of St. Peter at Westminster according to his last wishes.

I emphatically direct that I be buried in an inexpensive, unostentatious, and strictly private manner; that no public announcement be made of the time or place of my burial; that at the utmost not more than three plain mourning coaches be employed; and that those who attend my funeral wear no scarf, cloak, black bow, long hat-band, or other such revolting absurdity. I direct that my name be inscribed in plain English letters on my tomb, without the addition of ‘Mr.’ or ‘Esquire.’ I conjure my friends on no account to make me the subject of any monument, memorial, or testimonial whatever. I rest my claims to the remembrance of my country upon my published works, and to the remembrance of my friends upon their experience of me in addition thereto.

Will of Charles Dickens

In death, Dickens finally acknowledged his relationship to Ellen, mentioning her first in his will and leaving her the sum of £1000 while charging his sons, Charles and Henry, with the support of his wife Catherine out of the proceeds of investments left to them.

Dickens’ story, A Christmas Carol, has been told and enacted countless times over the years since it was first published. The earliest surviving footage of the story is the 1901 British silent film called  Scrooge, or, Marley’s Ghost, although six more silent films were made before the first sound picture debuted in 1928. The version I remember watching was most likely the 1951 version that starred Alastair Sim as Ebeneezer Scrooge.

Remember that, and charge their doings on themselves, not us.” “And it was always said of him, that he knew how to keep Christmas well, if any man alive possessed the knowledge. May that be truly said of us, and all of us! And so, as Tiny Tim observed, God bless Us, Every One!”