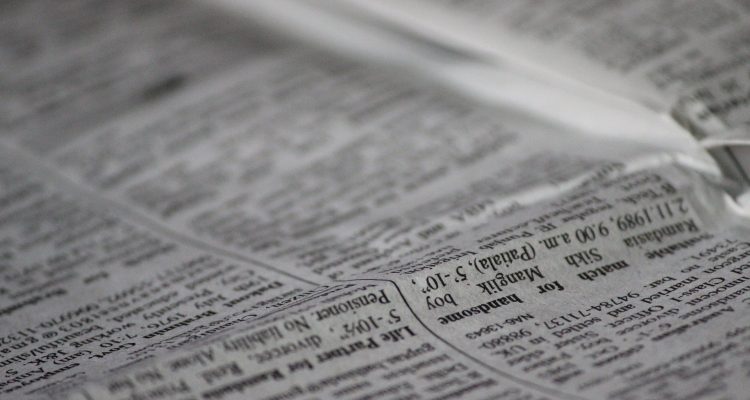 Before online dating websites like Tinder or Match.com, how did our lonely ancestors find love? They placed advertisements in Matrimonial Journals, in newspapers and sometimes even wrote away to officials in far away places looking for bargain brides.

Published in Toronto, the Anglo-American Matrimonial Journal took advertisements from lonely men and women looking for matrimonial opportunities. It divided the requests between the upper, middle and lower classes.

The advertisements came from all over the world from some presumably desperate people. After all, what was a man to do when he lived in the middle of nowhere, with few opportunities to meet a prospective wife?

A real good girl wanted at once for matrimonial purposes, by a steady man, in the North-West Territory. Never mind looks so long as the heart is in the right place. Marriage to come off in about 20 days. Address box 5001, Matrimonial Journal Office, Toronto.The Anglo-American matrimonial journal Volume 1, no 1 December 1886

Other applicants were looking for a little security.

A man, aged 36, begins to feel kind of lonely-like, and thinks that it is time he got married. Communication desired from a good, steady woman about the same age, and if possible with a little money. Address box 1023, Matrimonial Journal Office, Toronto.The Anglo-American matrimonial journal Volume 1, no 1 December 1886

Other advertisements seemed to suggest that there might be a goal other than marriage.

A gentleman, Widower, age 60, holding an official position, wishes to correspond with a lady from 40 to 55 having means. Advertiser can introduce her to some of the best society in Europe. Address box 1477, Matrimonial Journal Office, Toronto.The Anglo-American matrimonial journal Volume 1, no 1 December 1886

Profiles were published for free but there was a subscription fee to read the issue and a fee payable on marriage. Many of the advertisements placed by the upper class included their annual income, perhaps trying to buy affection.

Some men wanted brides from back home in the country where they were born. In this example, a young man’s father’s dying wish was for him to marry a girl from the ancestral town in Wales. The young man in question, having no other idea of how to proceed, wrote to the postmaster in the town in Wales.

HOME TOWN WIFE WANTED, NEW YORKER’S UNUSUAL REQUEST. The Milford Haven Postmaster has received the following letter: Y. M. C. A., 83rd Avenue, New York City, U. S., January 17. “Dear Sir, —I suppose you will take this as an unusual request, but I can’t help it … When my father died he said he wished me to marry a girl from his old home town, Milford Haven, and as I was born in America I do not know any. That is why I am – writing to you to see if you can get someone to write to me. I am 22 years old, weigh 195 lb., am a dark man, with ruddy complexion, and have a High School education. I am not particular as to the good looks of the girl. Hoping to hear from you. I remain, yours truly, “Lloyd W. Williams. “The Scotsman - Friday 04 February 1927

This Canadian was looking for an English wife and seemed fixated on age.

A WIFE WANTED. Canadian Seeks Marriage A Good Steady Wife (From our own Correspondent.) Kendal, Friday. An employee Toronto City Corporation, who is an Englishman, has written to the Mayor of Kendal asking it the mayor can find him good, steady girl for a wife, preferably from Kendal or the Lake District. Applicant Frank Stanley says he is a widower aged 46 and would like a girl of 25 to 35. He has no children and would not object to a widow with one child, providing the widow is not over 32. I would try my best make her happy and give her good home,” he writes. I am a teetotaller and have saved a little money. I served with the Canadians in the war.” Stanley sent covering letter from a barber Toronto who recently went Canada from Kendal. Yorkshire Evening Post - Friday 04 October 1929

Women, looking for adventure, were eager to answer the call.

WIFE WANTED Four Barnstaple Answers to Canadian’s Appeal Barnstaple’s civic matrimonial agency is functioning. In the last issue of the “Journal-Herald” a letter was published from Mr Frank Whittaker, of Montreal, Canada, asking the mayor of the borough put him into touch with a young woman with view to early matrimony, the writer adding: “I am out here by myself, and right through life I have always wanted to marry an English girl.” The Mayor has already received four applications for Mr. Whittaker’s address.North Devon Journal - Thursday 24 February 1949

Some of the advertisements were quite specific, detailing every aspect of the woman they were seeking.

ENGISHMAN (49), height 5ft. 8-1/2 in. weight 13st., fair, hair turning grey, no bad habits, very loving disposition, will soon return to England, would like to make the Acquaintance of an English Lady that is fairly good looking, medium height. Weight l0st. or 12st., colour of hair immaterial, and an income sufficient to live comfortably on; one that would make him loving and affectionate wife.—Address. Box 680, Mercury Office, Northampton. 537Northampton Mercury - Friday 13 February 1914

In this example, it seems as though the applicant was more interested in money and a car and the wife was just an after thought!

WIFE WANTED. A Canadian settler has asked the Manchester Guardians to find him a wife, aged 28, with a capital of 11,000 dollars -about £2,300- and owning motor car.Lancashire Evening Post - Friday 14 August 1925

Not everyone was willing to oblige a gentleman looking for a wife. This writer wrote to the board of guardians but the chairman refused to entertain the application.

A WIFE WANTED. A letter from a settler in Indian territory, America, was read at the meeting of the North Dublin Union Board of Guardians. It said: ** Wishing to live the remainder of my life with good an affectionate wife. wish to respectfully ask of you to answer if you can select me woman of fair education and intellect, and not to exceed 28 years old. Satisfaction of character will be given of the person by responsible persons. Expenses will be paid.Belfast Telegraph - Saturday 22 June 1878

This prospective suitor was looking for an ugly wife, as he thought she would be less likely to spend his money or drag him to parties.

Ugly Wife Wanted. Advertiser prefers home life to society. Ralph Herman, of Yonkers New York who advertised in a local newspaper for an ugly wife, received an application from a young woman of Westchester, says the New York correspondent of the “Express” today. She enclosed her portrait, which Herman at once declared left no doubt about her statement that “my ugliness is incomparable.” By way of consolation this frank candidate for matrimony offered to bring her husband a snug fortune, declaring that she had declined several proposals, know that in her case suitors had sought her only for her money. An early marriage is to result, Herman stating that he prefers a wife of the plainest sort, as she would be more domesticated and “not crazy about society.”Evening Despatch - Friday 02 January 1914

WIFE FOR SALE Mrs. Dorothy Lawler, 28. of Hempstead. New York, who advertised in her local paper that she would marry the first man who would pay her £2500 in cash. Her offer explained: ” Divorcee, blonde. attractive, wants man to marry and support her and two children. Must be willing and able to make immediate £2,500 cash settlement.” Married at sixteen. she has a daughter, eleven, and a son, ten.Daily Mirror - Friday 28 May 1948

In 1889, Cleveland G Arnold was arrested by a post office inspector for trying to swiddle advertisers from Matrimonial Journals. He would write to one of the advertisers and correspond with them for a time, eventually sending a portrait of an attractive woman. Eventually the gentleman would want to take the relationship to the next level and would send money to the girl to help pay for her railroad ticket.

The girl, of course, would never arrive.

Some men, thus swindled, would be too embarrassed to come forward, but eventually enough did that they authorities were able to track down Arnold who had been running his scam for almost two years.

No doubt, not all applicants got what they were looking for, but it likely helps if your expectations were low. In this case, the young lady thought she had little to lose, but found herself in quite a predicament only a few months after her marriage.

Miss Nannie Willhite was born in Cookville, Texas in about 1886. Her parents worked at various holdings throughout cattle country and it was while in that employ that her father was killed. Soon after her father’s death, her mother tragically perished in a terrific cloudburst. Orphaned, Nannie moved to Oklahoma to live with her sister, but then in yet another tragedy, her sister was killed in a freak fire when her skirt touched a red-hot wood stove in their remote cabin.

Alone in the world, Nannie worked at various odd jobs and in 1914, she was working as a cutter in a factory in Fort Smith, Arkansas. When one of her companions showed her a matrimonial journal advertising for wives, she decided to respond to one of the advertisements for a wife, so anxious was she to have car-fare to travel to the east. She reasoned that if she did not like the man, she did not have to marry him and thought it was worth a chance.

And that was how Nannie Willhite met Isaac (Ike) N Williams. The pair married in the summer of 1914. Then towards the end of the year, it all went wrong.
Isaac Williams was arrested for the murder of Hubert B Case, a merchant and Count Commissioner of Barkhamsted on 25 November 1914. Nannie insisted that he could not have done the crime as she was certain that he had been in Poughkeepsie that evening. Despite her testimony at the trial in that regard, Williams and Roe were found guilty of the murder and lost their subsequent appeal.

On 3 March 1916, Isaac N Williams of Bridgeport Connecticut and Harry N Roe of Poughkeepsie NY were hanged in Hartford in the early morning hours, just after midnight leaving Nannie Williams a young widow.