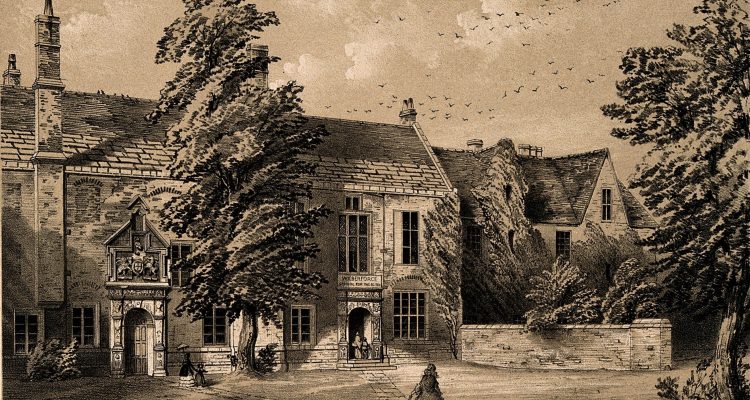 What did it mean to be one of those with what were considered to be ‘grave infirmities’ in the Victorian age? Blind, Deaf and Dumb, Imbecile, or Lunatic – just one column on the census to record a lifetime of physical impairment or mental anguish.

In the present advanced state of statistical inquiry a Census would be incomplete which failed to take special notice of the classes of the population suffering under grave infirmities, such as blindness, deaf-dumbness, idiocy, and lunacy. By the terms of the Census Act, therefore, householders and other occupiers were required to state with respect to the persons returned by them in the Schedules “whether any were blind, deaf-and-dumb, imbecile, or lunatic,” and, although the obstacles which prevent the attainment of perfect information on the various matters comprehended in the Census are perhaps greater with regard to these classes than to any others, we have reason to believe that in the numbers presented in the accompanying tables there is a close approximation to completeness. We proceed to indicate the general results of the inquiry on this head, but the detailed Tables should be studied by those specially interested in these classes.Census of England and Wales for the Year 1871. General Report. Volume IV. A Vision of Britain Through Time.

In 1871, there were 21,590 blind persons in England and Wales which was one blind person to every 1,052 people in the country. The report found that blindness was more common in agricultural communities than in manufacturing and mining districts and it was concluded that the reason for this was that those afflicted with blindness or other infirmity would not have been as likely to emigrate from their agricultural villages to the urban centres of manufacturing. Another factor that contributed to this statistic was that blindness tended to be more prevalent amongst the elderly who, again, were more likely to remain in the rural villages. Conversely, there were more blind in London, with a rate of one to 1,126 and this was attributed to the presence of blind people who came from other parts of the country to benefit from the institutions and charities in the city.

There were more blind men than women proportionately, and this was attributed to men working in occupations that were ‘more likely than those of women to produce accidents and diseases causing loss of sight.’

That blindness was associated with age seemed a likely conclusion since there were few children, only 567, under the age of five who were blind but 9,609 blind persons over the age of sixty.

Thomas Ord – Blinded in a Mine Accident

Thomas Ord, born in about 1845 in Stainton, Durham was a miner by occupation who became blind as the result of a mining accident probably in about 1871 when he is listed as being miner however there is an indication that he has been blinded in an accident. At the time of the 1871 census, Thomas had a wife and two small sons. After the accident, no longer able to work in the mines, Thomas became a mat maker which is one of the occupations identified by the report. Thomas Order and his wife Harriet had two more children after he was blinded, both girls. Judging by the continuous appearance of the Ord family after 1871 through to 1911, they seem to have survived Thomas’ accident quite well.

There is no indication that the family was destitute as a result of his blindness. Harriet, Thomas’ wife, does not list an occupation in any subsequent census and the family remains as a unit. The children do not appear to have been sent out to work and there is no indication that the family had to enter the workhouse or accept assistance from the parish although they might have done. In 1901, Thomas is still listed as head of the household although no occupation is listed for him. He is 56 years old. Harriet, his wife is 69 and their daughter Jane, age 20, still lives with them as does their daughter Emily, her husband and their young child. In 1911, when Thomas was 66 and Harriet was 69, they were living with their daughter Jane’s family.

In 1871, there were 11,518 persons who were described as either deaf and dumb or simply dumb, about one in 1,972 of the population. This was a marked decrease from the 1861 census, about six percent, and the decline was attributed to a decrease in contributory disease as a result of improved medical care and hygiene. The same decreases were observed in both Scotland and Ireland, with Scotland enumerating 2088 deaf and dumb persons (one in 1609) and Ireland counting 5554 (one in 975).

Those enumerated as deaf and dumb worked in a large variety of occupations, although it was sometimes difficult for them to find suitable employment. The occupations were those that did not require spoken communications, and often were in the industrial fields.  Occupations reported included 61 who were engaged in the fine arts as artists or engravers, 253 as tailors, 512 as shoemakers, 90 as carpenters, 45 as printers, and 737 as agricultural or general labourers; 239 in domestic service, 548 dressmakers and seamstresses, 109 laundresses, and 92 employed in the cotton manufacture.

There were 1220 individuals that were described as scholars, most of whom would have been attending one of the thirteen institutions for the deaf that were located in London and other larger cities.

An effort was made to determine the number of cases of congenitally deaf persons as compared to those who became deaf through accident or disease. The measurements were considered imprecise, however about sixty-three percent were considered to be congenital. It was noted that only 529 of those reported as deaf and mute were residents of a workhouse in 1871 and of those, 51 were also considered imbeciles and 26 were also blind. This was attributed to the increased number of specialised schools for the deaf.

Charles Wright Driver was born in the spring of 1855 and baptised on 25 May in the parish of Oakridge, Gloucester, the son of Titus Driver, a farmer, and his wife Arabella. His brother, Enoch William Driver, was born six years later, baptised on 19 May 1861 in Rodborough. Both were deaf from birth, presumably a genetically inherited condition, although none of the other children of Titus and Arabella were deaf.

Charles, and perhaps Enoch, were sent to the London Asylum for the Deaf and Dumb on Old Kent Road. Children who were deaf and dumb could be sent to the school for a term of five years where they would learn to read and write, their education often sponsored by the guardians of the poor. It is not known when Charles was admitted to the school but he was there at the time of the 1871 census on 2 April. No evidence was found to suggest that Enoch attended the school but it seems somewhat likely that he would have followed in his brother’s footsteps.

The term of each pupil’s stay is five years; they are taught to read, write, draw, and cipher, to speak by signs, and in many instances to articulate so as to be clearly understood. They are wholly clothed and maintained by the charity, are instructed in working trades, and in some cases apprentice-fees are given. The Asylum is amply supported by the wealthy; and besides its annual receipts from subscriptions, donations, and legacies, &c., it has some funded stock. The pupils are elected half-yearly, without reference to locality, sect, or persuasion.British History Online: The Old Kent Road

Ten years later in 1891 when Charles was thirty-five, he was back with his parents in Rendcombe, still working as an agricultural labourer as were his father Titus at age sixty-four and his brother Thomas who was twenty-two. Enoch at age twenty-nine was also working as an agricultural labourer, and was boarding with the Evans family in Duntisbourne Abbots.

Arabella Driver died in 1899, leaving Titus a widower. In 1901, he was living in Chedworth along with his son Enoch Driver who was still working as a labourer. Charles was by then forty-five and working as a groom for another Lewis family in Rendcombe.

According to the census returns of 1871, 29,452 persons were described as idiots or imbeciles (one in 771) and 39,567 persons were considered to be insane (one in 574). Of those considered imbeciles, or of limited mental ability, there were 3456 in special asylums and a number of them were usefully employed owing to the greater emphasis on training and education. The causes of idiocy and imbecility were attributed as:

The principal causes of idiocy and imbecility are spoken of by those who have studied the subject as distinctly recognised; they are connected with physical or mental weakness, or with abnormal conditions, either the fault or the misfortune of parents. Residence in deep valleys, damp and unwholesome climate, crowded dwellings or other unhealthy conditions, intermarriages among a limited number of families, and more especially where weakness of brain already exists,—these are allowed to be predisposing causes, and as they are obviously within human control, the hope may be entertained that the extent of this affliction may be limited in the future.Census of England and Wales for the Year 1871. General Report. Volume IV. A Vision of Britain Through Time.

The census return of 1871 showed an increased number of the insane housed in asylums as they were removed from the workhouses throughout the mid-nineteenth century as more became known about caring for the insane. And whereas previously, many of the insane were cared for by their family and friends as long as they were able to, this was less the case, now that more humane care was available.

On 31st December 1871 there were in England and Wales 54 county and borough lunatic asylums, 16 registered hospitals, 4 state asylums, and 106 licensed houses, making 180 establishments for the reception of the insane, exclusive of about 300 private houses each containing a single patient.Census of England and Wales for the Year 1871. General Report. Volume IV. A Vision of Britain Through Time.

For Idiots. The Royal Albert Asylum

Another branch of the system what is known as the “shop-lesson.” This is really a capital idea. A complete grocer’s shop is fitted —a counter, scales, weights, and tins containing tea, sugar, and all the other articles necessary. One boy keeps the shop under the supervision of the master, and the rest are supplied with money and come to purchase. The lad behind the counter taught to know the proper weights, and what change should be given, while the others are taught to know what change they should receive. While I was present the master bad very great difficulty explaining to one boy that the half three pence was three halfpence, but some of them displayed considerable aptness this lesson. It is such experiments this that their tastes and inclinations are discovered, and the success of the system is so great that no case can be considered quite hopeless.Yorkshire Post and Leeds Intelligencer - Saturday 27 March 1875

It was not until 1886 when the Idiot’s Act was passed that a distinction between lunatics, idiots and imbeciles was made.