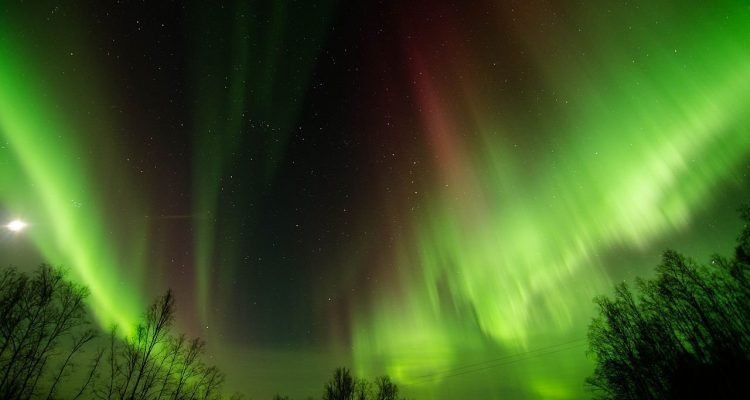 In mid-August of 1859, astronomers were excited by the appearance of a large solar spot on the sun which first made its appearance on the 15th of the month. At the same time, there were five other large spots visible but these were insignificant when compared to the enormous spot that appeared as a notch on the edge of the sun and was estimated to be about 100,000 miles in diameter.

After seeing the large spot on the sun, astronomers predicted that the weather would be warmer than usual for the remainder of the month, as the solar spot rotated with the sun.

From 29 August, the Aurora Borealis appeared to people around the world, extending towards the equator and was visible in most of England, in Paris, France, and as far south as Rome, Italy.

OBSERVER. TO THE EDITOR OF THE EVENING MAIL. Sir, —I lose no time in sending you an account of perhaps the most extraordinary phenomenon I have ever seen (my experience dates back about 30 years)—a brilliant display of aurora borealis in August. It commenced last night (Sunday) about 10 45 p.m., and has lasted probably the whole night (two hours’ unavoidable sleep prevents my speaking with absolute certainty on this point). , . On its first appearance, there were several fine streamers, some of them white and some faint crimson, extending from near the horizon almost vertically to a and b Ursas Majoris. From that time till midnight there were generally very beautiful streamers, but without lateral motion (which remark applies to the whole display), most of them being not quite vertical, but inclining slightly towards the east the top. There was also always a general light, extending at midnight from N.E. W., and sometimes bright enough to enable a person read the time on the face of ordinary watch. There was generally a bank of clouds near the north horizon. and sometimes this obscured the sky for 20 degrees or so upwards. , Barometer steady 29 , 8 (228 feet above the sea). Air calm. While I write, the approaching daylight has put out the aurora. At 2:50 a.m. there were two feathery streaks of light extending from the horizon near the zenith, and passing across a and Ursae Minoris. Allow me to call your attention to the coincidence of the time of the occurrence of this extraordinary phenomenon with that of the appearance of remarkable solar spots. William C. Burder. Clifton, Monday, Aug. 29, 4 a.m.Evening Mail - Wednesday 31 August 1859

In Australia, the Southern Aurora amazed the populations of Sydney and Queensland.

SOUTHERN AURORA. MOST of our readers saw last week, for three nights, commencing after sunset, and lighting up the heavens with a gorgeous hue of red, the Southern Aurora. At Sydney they only appear to have had a tithe of the beauty, as the Aurora did not shine so long or so brightly as in Queensland. Friday night was the grandest in appearance here, the Aurora being visible from seven o’clock in the evening until after midnight. At times there was an appearance of rays down the whole range of light, which seemed many miles in extent, and a number of stars were distinctly visible, contrasting their pale effulgence with the red hue of the Aurora.The Moreton Bay Courier, Wed 7 Sep 1859

As many British sat down to their noon meal on 1 September, amateur astronomer Richard Carrington observed a solar flare from his home observatory in Redhill, Surrey. At the same time, his colleague Richard Hodgson was seeing the same event from his observatory in Claybury, Essex. Unknown to either of them, the flare was caused by a major coronal mass ejection, with a large release of plasma and electromagnetic radiation that began travelling towards the earth at a high speed.

Richard Carrington later described what became known as the Carrington Event in an article written for the journal Monthly Notices of the Royal Astronomical Society. He initially saw two patches of very intense light and thought that his equipment had malfunctioned but on further examination, he concluded that what he saw was real.

“I thereupon noted down the time by the chronometer, and seeing the outburst to be very rapidly on the increase, and being somewhat flurried by the surprise, I hastily ran to call someone to witness the exhibition with me.”

Richard Carrington
Richard Carrington was born in Chelsea on 26 May 1826. His parents were Richard Carrington senior, the owner of a large brewery and Esther Clarke Alpin. At the age of 27, Carrington built his observatory at his home in Redhill, Surrey but his aspiration for a life spent pursuing his astronomy studies was interrupted by the death of his father in 1858. Taking on the management of the brewery, he continued to look to the skies in his spare time, witnessing the solar event named after him in 1859. He died 27 November 1875 at Churt near Farnham, Surrey and his estate, valued at just under £20,000, was left to his widowed mother, his only next of kin.

The geo-magnetic storm that followed the solar flare witnessed by Carrington and Hodgson caused interruptions of the estimated 100,000 miles of telegraph systems throughout the world for several hours on 2 September as an electrical current of extraordinary intensity manifested itself on telegraph lines in Pignerol, Mondovi and Savoy. In the telegraph systems that used Wheatstone’s apparatus, the horizontal compass needles swung right or left. The systems using the Morse apparatus saw the keys remaining fixed to their axes with strong polarity. Sparks flew at Turin from 5 o’clock in the morning until about 3 o’clock in the afternoon, with the deviation of the magnetic needles seemingly coming in sixty second bursts separated by thirty second intervals. Some telegraph operators were able to send messages even after their equipment was disconnected. In Sydney, the newspapers praised the Aurora Australis with its splendid crimson, even while citing the phenomenon as the cause of an interruption in the telegraph service.

The northern lights, which formed so remarkable a spectacle last night, between eight and ten o’clock, interrupted telegraphic communication at all points. Reports were received in this city that the effect of the Aurora was noticed at New York, Philadelphia, Pittsburgh and Columbus, and was the same as that experienced in a thunder storm. There were strong currents of electricity observed on the wires to which no batteries were attached, and some extraordinary electrical phenomena, difficult of explanation, noticed. The wires in operation north of New York, were interrupted in a greater proportion. Business was at last suspended. A similar interruption was observed in ’51 or ’52, when all the wires in the country were interrupted, so that business was entirely suspended.The Cadiz Democratic sentinel., August 31, 1859

A Splendid Aurora Borealis. We had, last night, one of the most brilliant auroral manifestations we have ever known in summer. It began about eight o’clock, before the twilight had fully gone, and at twelve it was still brilliant. At the time it began, there were dense masses of black clouds in the West, reaching half-way to the zenith. These disappeared before the Aurora, which soon overspread half the sky, at the “zenith of the magnetic dip,” which phrase may be thus explained. If a magnetized needle be suspended in a vertical plane on a pivot, the northern pole will point to the earth, but not in a vertical line, and the angle of variation from the vertical line is called the “magneto dip.” The zenith of this is the point in the sky to which the south polo of the needlepoints. The colors of the Aurora were greenish-vellow, and the complimentary shade of red. When the Aurora was at its height the colors were very brilliant. Later in the night the blush was confined to the north, and did not reach more than one-fourth the distance to the zenith. The Aurora is supposed to be caused by the illumination, through electrical influences, of particles of sleet, in the higher regions of the atmosphere. We have seen it several times in summer, and have almost always noticed that it followed a sudden lowering of the temperature after rain. Last evening the mercury sank rapidly, at twelve o’clock it was more than probable that we should have frost before morning. Although, as we say, we have several times seen the Aurora in summer, we never saw so brilliant a manifestation but once before, and that was more than fifteen years ago, in this city, when the diffusion was as great and the light more brilliant than last night…. Belmont chronicle., September 08, 1859

The light was so intense that our hand held near a wall cast a shadow, and we read by it solid minion type.

Could it Happen Again?

The solar storm of 1859, referred to as the Carrington Event, was one of the largest geomagnetic storms in the records and it is estimated that should such a storm occur in our time, it would cause wide spread problems with the electrical grid, knock out satellites and render modern telecommunications useless. The best predictive models estimate that it would take between four and ten years to achieve recovery should a similar storm occur in our time. It was only because of the lack of technology in our ancestors’ time that the Carrington solar flare did not cause catastrophic damage.

Similar but less severe solar storms occurred in May 1921 and May 1967 causing wide-spread interruptions of radio and in March of 1989, a geomagnetic storm triggered by a coronal mass ejection knocked out power in Quebec, Canada for nine hours.

If something similar to the Carrington Solar Flare of 1859 happen today with all our present day technology, we might suddenly find ourselves thrust back into the time of our ancestors with no electricity, no communications and no running water.