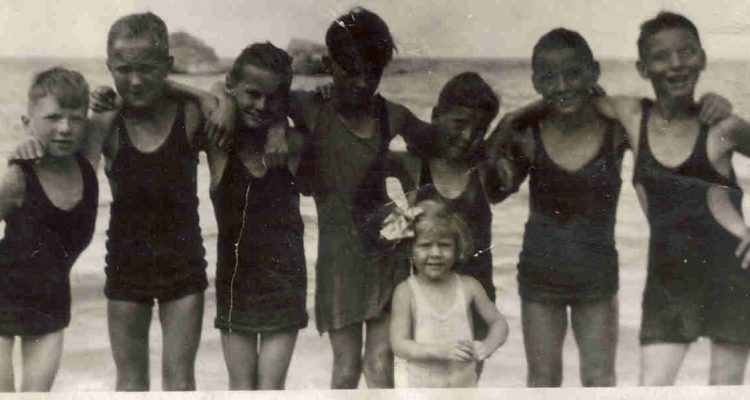 Crowds Flock to Sunnyside Beach in 1922

Crowds flocked to Sunnyside Beach in 1922 when the new park opened, lured by the modern new bathing pavilion and the miles of parklands, boardwalks and beaches near Humber Bay.

The newly formed Toronto Harbour Commission reclaimed land by dredging the bottom of Lake Ontario and placing over 3 million cubic yards of fill along the shoreline. They created a new beach and built a much-needed new bathing pavilion. Permits to operate in the new amusement park were highly sought after by independent merchants and ride operators.

The beach at Sunnyside was a popular destination for Torontonians in the summer even before the new development of Sunnyside Park.

Each summer, Torontonians, anxious to escape the heat, would head for Sunnyside to escape the city for a little while and swim and relax on the beach.

Special cars were put on by the Toronto Railway each summer to provide the boys and girls of Toronto a free journey to the beach for the day. The cars, sporting a sign reading “Free Car for Children to City Bathing Station” would leave the corner of Dovercourt Road and Van Horne at 2 o’clock in the afternoon and would return at 4:30 in the evening. Children were required to wear bathing dress. 1EXCELLENT OPPORTUNITY: IF YOU WANT TO BATHE, HERE IS YOUR CHANCE City … The Globe (1844-1936); Aug 13, 1910; ProQuest Historical Newspapers: The Globe and Mail pg. 14

The accommodations were spartan and insufficient for the crowds that came in larger numbers each year.

Letter to the editor: Sunnyside is one of the best bathing beaches in Canada but the “locker” accommodations are totally inadequate. There are 71 lockers for boys and 38 for girls but they need at least 175 and 75. The deepest water is 4 feet – not suitable for diving.

The area surrounding the beach where railroads met roads was dangerous to pedestrians and drivers alike. Four train tracks belonging to the Grand Trunk Railway were used by many passenger trains every week and long, slow freight trains lumbered past the crossing regularly. Even though the crossing was protected by barriers and patrolled by traffic policemen, many pedestrians defied all the safety measures when rushing from the King and Queen street cars to catch a radial car leaving for Long Branch and there were frequent fatalities in the area. 2THE RAILWAY CROSSING AT SUNNYSIDE; May 13, 1911; The Globe and Mail pg. 6

Sunnyside Station, where travellers waited for the trains was a particular concern. There was no platform and in the winter months, passengers were forced to wait standing on snow and ice and then descend a very dangerous stairway to the tracks fifteen feet below. 3SUNNYSIDE STATION CALLED A DEATH-TRAP: PASSENGERS STOOD FORTY MINUTES ON ICE WAITING FOR WESTBOUND TRAIN. Jan 16, 1912; The Globe and Mail pg. 4

In 1911, it was proposed that there be a separation in the grades of Lake Shore Road and the Grand Trunk Railway and several solutions were debated. Whether subway or bridge, the solution would cost the taxpayers of Toronto somewhere between $340,000 and $433,000 but it had to be done. 4THE RAILWAY CROSSING AT SUNNYSIDE; May 13, 1911; The Globe and Mail pg. 6 In the end, it was decided that the Grand Trunk Railway, with some money from the public purse, would construct a bridge over the railway tracks. Despite the Government funding the bridge took quite some time to complete.

Those who used Sunnyside beach in the years before the park, did so at their own peril. in 1910, there was a rash of thefts at the beach. Bathers who were unable to get one of the few lockers to secure their belongings were forced to leave them unattended and losses of articles and money were common. Special officers were put on patrol in the area after the loss of a gold watch and $10 were reported. 5Petty Thefts at Sunnyside; Jul 15, 1910; The Globe and Mail pg. 4

Bathing suits and towels could be rented from the pavilion and were washed and sterilized after each use before being put back into service. Unlike the previous bathing station, the new modern pavilion had a capacity to service 20,000 bathers each day, essential if the park was to attract tourists. After changing into bathing costumes, all bathers had to pass through a warm shower area before entering the beach area where the sand and water beckoned and light refreshments were available.

Admission to the pavilion was 25 cents for adults and 15 cents for children. 6NEW PAVILION FINEST OF KIND: Every Imaginable Accommodation Is Provided for Bathers; Jun 30, 1922; The Globe and Mail pg. 17

In 1921, the Harbour Commission completed work on the Sunnyside Pavilion Restaurant, located near the beach on the former site of Myer’s. Its entrance was from the lake side and was surrounded by a pergola, fountains and gardens, and light refreshments were served outside in the summer months. Inside, visitors would find dining rooms and dance floors. The Blue Room held 400 diners while the more intimate Rose Room had room for 300 diners. Both offered after dinner dancing to live dance bands like Joe DeCourcy and his Orchestra.

The Palais Royale building opened in 1922 and the dance hall operated as a night club with nightly live music with special engagements by famous musicians such as Count Basie and Duke Ellington. My own father, Jack Bond, played the trumpet at the Palais Royale in the 1940s and I remember him pointing out the building to me as we drove along the Lakeshore when I was a child.

By the 1920s, with the automobile omnipresent in the city, it was imperative that the Toronto Waterfront Commission provide parking for the crowds of people expected to use Sunnyside and in June of 1922, the parking area was completed with room for 16,000 automobiles.

Not everyone was happy with the scope of the new development at Sunnyside. Many felt that the amusement franchises would spoil the ‘restful and becalming‘ atmosphere at Sunnyside beach.

The beach, together with the natural charms of High Park, they [Toronto residents] felt made their city a unique and most desirable place in which to reside – for it is not often that a city the size of Toronto […] has such natural charms to offer city dwellers. Now, alas, all their hopes are dissipated! And for what? For 25 per cent of the profit that one business man hopes to reap through the transaction. Katherine O’Niell, 117 Yonge Street, Toronto

The first year, only seven licenses were granted to ride operators but over the winter of 1922, plans expanded and work on a huge roller coaster, the Sunnyside Flyer, commenced. It was designed by A.J. Miller and was said to have the ‘dippiest-dips on the continent’.

On 20 July 1929, the SS John Hanlan ferry, recently decommissioned, was purposely set ablaze in front of about 75,000 spectators just after midnight in a display arranged by DM Goudy, the publicity director for Sunnyside Beach.

The lurid glare swept over the shore like an enormous spotlight, tinting the countless heads and covering the beach like a huge red blanket. The crimson sky turned eyes for miles around in the direction of Sunnyside. The fire grew stronger and stronger, while gasps came from the crowd as the flames wrapped themselves about the ancient hulk. White-hot fire boiled between the decks. The wheel-house and bridge buckled first and fell into the inferno below. The upper deck collapsed, leaving the funnel, which had been belching forth smoke and fire from the beginning. Soon the ship was merely a burning shell which continued to throw a crimson glare over the beach and merrymakers well into the morning.

The End of an Era

By the mid 1950’s, Sunnyside Park was coming to the end of its time.

It is more than absurd to have an amusement park sitting astride one of the busiest and most congested sections of highway in the Province.

Sunnyside had to go.

The Toronto Harbour commission finally ordered Sunnyside Park to be demolished in 1955 by to make way for the Gardiner Expressway after a series of fires that winter. One fire, which took place in October 1955, destroyed the store concession at the Sunnyside Fastball Stadium and caused damage estimated at about $500. A second fire the same night happened at the Penny Arcade, a quarter mile to the west. Damage to the slot machines and other amusement devices was reported but the fire was stopped before it spread to the nearby roller coaster structure.7Firebug Strikes Thrice in 2 Hours; Damage Is $6,000, The Globe and Mail ; Oct 16, 1950; pg. 1

Today, only the Sunnyside Pool and Bathing Pavilion and the Palais Royale survive.

My great-grandparents, Daniel and Polly Bulmer, lived at 150 Roncesvalles Avenue, quite near Sunnyside Beach. The park was a popular destination with the family.

My great-grandfather Daniel Bulmer was a saxophone player with the Salvation Army Band. The band would often put on concerts at Sunnyside for the throngs of Torontonians and tourists that came to the park every summer. Here he enjoys a rest on a park bench.

My mother and her brothers and sisters grew up in the northern Ontario town of New Liskeard. My aunt Jessie Brown, aged 20, and her cousin Elsie Brown, aged 25, are having a grand time driving the bumper cars on a visit to Toronto in 1932.

Blog TO – What Sunnyside looked like before the Gardiner Arrived

The Torontist – The Poor Man’s Riviera