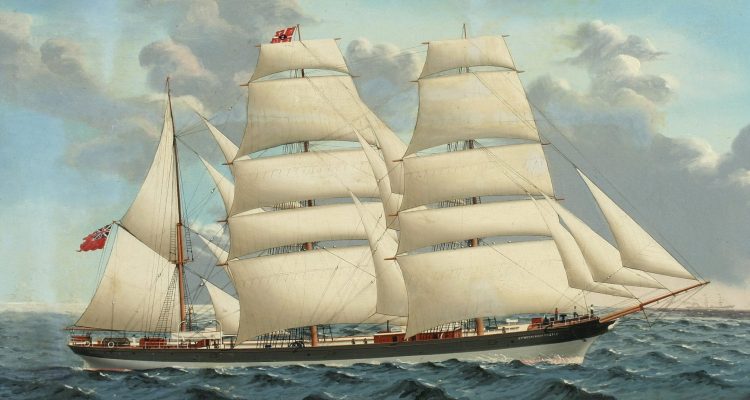 Cyclone in the Indian Ocean

The ship Pendragon, an iron vessel of 1278 tons register, was owned by Messrs MacDiarmid, Greenshields, and Co., of Drury-buildings, Drury-lane of Liverpool. On 9 February 1876, the Pendragon left Calcutta, bound for Havre, and about a month after leaving port, she encountered a cyclone in the Indian Ocean. During the storm, Captain Charles Symons was lost at sea along with three of the crew. The following account of the fight to save the ship is based on a report written by the Chief Mate David Scott, the Second Mate Henry Alcott, and the Third Mate W H Alleyne.

On Saturday, 11 March 1876, the weather was squally. Rain fell and the sky to the north-west was threatening. At about 1 o’clock in the afternoon, the approaching squall struck the ship with a fury and the crew handed the sails to lower the topsails and foresail. By 7 o’clock that evening, it was blowing heavy but within the hour a more moderate sky broke to the south. The calm was short-lived however, and by 11 o’clock, the winds had increased to hurricane strength and there was a very heavy sea. At midnight, it was decided to round the ship to the wind on the port tack. The squall hit the ship with a fury, swamping the lower yards and completely submersing the leeside of the ship in water. The crew furled the main topsail but despite the effort, the starboard window of the saloon and sail room burst open from the force of the water, flooding the saloon and after-cabins.

The crew set the foremast staysail and tried to run from the storm but the iron ship could not make headway in the gale. They set the inner jib and the ship began labouring heavily. Everything was washed off the deck as the seas swamped the boat. The monkey poop was gutted. 1This name has been given to a platform connecting a fore and after cabin in the after part of a vessel. All the salt provisions, lime juice, paints, etc. were gone. The ship finally began to make headway against the ferocious storm. The crew met to discuss their options and decided, that to save the ship, her cargo and the lives of those on board, that they would cut away the top masts.

At six o’clock Sunday morning, the ship broached too on the port tack. The crew cut away the masts at once, and they toppled into the sea, carrying all the gear with them. The fore topmast took the jib boom with its gear and both life boats were stove in. The rails were torn up. The starboard light house was gone. The starboard boat was swept off the after skids. The lower rigging was badly damaged. The fore and aft stays were gone. The engine room doors were stove in, as were the house and galley. The poop rails were smashed in several places and the monkey poop deck was smashed in on the starboard side and the steering hear was damaged. The ship continued to lie over, submerged to the main hatch. The crew were unable to move leeward to cut away the wreck, although they cut as much as they could, moving leeward in the bowsings.

An hour later, the cyclone still raged and the shipping seas rolled over the stern making a breech through the saloon, carrying everything into the sea. Throughout the day, the storm battered the floundering ship, breaching over it fore and aft. They were unable to get to the pump with all the water on the deck. Four hands were seriously injured. That afternoon, the steering gear was almost carried away but the crew managed to secure it with tackles.

That evening, the more, main and cross jack yards were working adrift and they secured them to the lower masts.

At nine o’clock, the tackles holding the steering gear gave way while they were trying to secure them. The violent waves rolled over the stern, submerging it and filling the deck aft with water so that it was level with the wheel house, washing all the crew off the poop deck. The ladder came crashing down on top of David Scott, the first mate, cutting his feet and legs. Bleeding profusely, he got up and struggled against the water to search for the captain, but he found no trace.

Captain Symons had been swept into the sea.

An hour later, the steering gear again was threatened and they secured it with more tackle and the sails that were bent to lower yards were destroyed.

Finally, by midnight that night, the seas began to subside, the winds to diminish. Wounds received during the battle with the storm could at last be tended to and the wreck of equipment on deck could be assessed. With the steering gear once more secured, they turned their attention to the rudder and found that the cleats from the sternpost and wood lock were gone altogether. The fastening of the upper part was working loose and it was secured.

Once temporary repairs had been made, the Pendragon limped into port at Mauritius so more extensive repairs could be undertaken. Besides the loss of Captain Charles Symons, three other crew were swept off the ship during the storm.

With no iron available in Mauritius, the crew had to await a supply from England to affect the necessary repairs. The cargo had shifted during the voyage and 160 bags of rice and 196 bags of linseed were wet. These were auctioned by order of the surveyors to recover some of the loss.

Charles Symons was one of at least fourteen children born to farmer Henry Symons and his wife Mary Ann in the parish of St. Minver, Cornwall. Henry Symons was a sheep farmer and while several of his sons followed in their father’s footsteps, both Charles and his older brother John Worden took to the sea, both becoming Master Mariners.

When Charles died, his mother Mary Ann had a plaque erected in his memory:

‘Charles Symons son of Henry & Mary Ann Symons born at Roserrow Jan 3rd 1840, Master of the ship “Pendragon” of Liverpool. Who was washed overboard during a hurricane in The Indian Ocean on 12th March 1876 in the 36th year of his age.’

The image of the plaque is used with permission by the photographer. Find Martin Nicholson via his blog Grave Mistakes and on the Social History Facebook Group.

News Articles about the Pendragon

The iron ship Pendragon, 1200 tons, which was on route from Calcutta to Havre, put into Mauritius for repairs, having lost her main topmast and fore and mizzen topmasts. The captain and three of the crew drowned. The cargo shifted and the vessel was held in quarantine. 2Sunderland Daily Echo and Shipping Gazette – Thursday 13 April 1876

There was no iron in Mauritius to repair the ship, and they awaited a supply from England. 3Manchester Courier and Lancashire General Advertiser – Friday 28 April 1876

By 10 May, part of the cargo of the Pendragon had been discharged, with only a small portion that was damaged during the hurricane. 4Lloyd’s List – Thursday 11 May 1876

Captain Charles Symons of the Pendragon, son of the late Henry Symonds of Roserrow, St Minver was washed overboard during a hurricane in the Indian Ocean on 11 March 1876. He was 36 years old. 5Royal Cornwall Gazette – Saturday 13 May 1876

The ship Pendragon, referred to amongst the shipping disasters recorded in yesterday’s Mercury, belongs to Liverpool, and is owned by Messrs MacDiarmid, Greenshields, and Co., of Drury-buildings, Drury-lane in this tow. She is an iron vessel of 1278 tons register, and was commanded by Captain F C Symons. She sailed from Calcutta on the 9th February for Havre, and about a month afterwards, as recorded in the log, which was published yesterday, she encountered such fearful weather than she was compelled to put into the Mauritius for repairs. As already stated, Captain Symons was missed from the ship on Sunday March 12, having been washed off the vessel during the night of the storm. 7Liverpool Mercury, Tuesday 6 June 1876.

The Pendragon departed from Tocopila, Chile on route to Falmouth on 27 October 1896. She was carrying a cargo of nitrate and soda and had 21 crew on board. Seven days into the voyage, a fire started on board and the crew was forced to abandoned the ship, leaving the Pendragon to sink.

At a subsequent inquiry of the Naval Court, held at Iquique on 16 November 1896, it was determined that the fire was of unknown origin but that there were no grounds to blame either the captain or crew. The fire was ruled accidental. During the inquiry, the captain was credited for lowering the lifeboats within four minutes, thereby saving all hands.

For another article inspired by one of Martin Nicholson’s photos, read Terrible Murder of a Policeman.