On Sunday night, May 27, 1934 at a rural home midway between the towns of Corbeil and Callander in northern Ontario, Donalda Legros and Mary Jeanne Lebelle were attending twenty-six year-old Elzire Dionne who had gone into premature labour with this, her seventh pregnancy.

The midwives, concerned about Elzire’s condition and the premature delivery, had summon local physician Dr. Allan Roy Dafoe in the pre-dawn hours of May 28. He later told the press:

I went out there at 4 a.m. and got busy right away. One child was born before I had taken my coat off and another was coming. Before 5 a.m. Mrs. Dionne had given birth to five children weighing an average of 2-1/2 pounds each. I had two women assisting me, one of them the mother of 17 children herself. The Toronto Daily Star, Tuesday, May 29, 1934

By the time the last baby had been born, Elzire Dionne was unconscious and Dafoe left her and the babies briefly to go and fetch Father Daniel Routhier, the priest from Corbeil, convinced that the babies and the mother would not survive the day. But by Tuesday, Elzire had recovered and the babies, swathed in blankets and huddled together in a large clothes basket were still alive.

They have their eyes open and are very quiet. All day yesterday we gave them a little water from a medicine dropper and today we are going to feed them a mixture of sterilized cow’s milk and water.The Toronto Daily Star, Tuesday, May 29, 1934

The two midwives and Dr. Dafoe had been so fearful that the babies would not survive, that they baptised each one in turn as it was born and when the priest arrived, he repeated the sacrament. It would never be known for certain which of the girls were the oldest, said Dr. Dafoe. They were not tagged with they were born, so there is simply no way to know. The five baby girls were named:

Elzire Legros had married Joseph Oliva Edouard Dionne on 15 September 1925 when she was sixteen years old.

The Dionne couple had five children at the time the quintuplets were born, and another who had died of pneumonia shortly after birth. The young children slept through the birth of their tiny sisters and were no doubt greatly surprised when they awoke the following morning to find a basket of five squirming babies. The older siblings were:

News of the of the quintuplets’ birth spread across the continent in a matter of minutes and congratulatory messages flooded in. When reporters arrived at the Dionne home, they found the home quiet and the thirty-one year old father Oliva Dionne busy with his daily farm chores.

The babies had not yet been weighed by that time but the omission was quickly rectified when a potato scale was produced. The combined weight of the five sisters was 13 pounds, six ounces and their individual weights ranged from 3 pounds 4 ounces to 2 pounds 4 ounces.

The babies are doing as well as could be expected.

By Wednesday, the babies were still alive more than 50 hours after their birth and Dr. Dafoe pronounced them to be doing ‘as well as could be expected’. A team of five women were helping to feed the tiny girls, using an eye-dropper to given them a mixture of milk, corn syrup and water. An incubator was being rushed to the Dionne home for the infants, having been located in surgical supply house in Chicago. The incubator, an older model, required neither gas or electricity to run, since the small farm-house had neither. In the interim, the babies were wrapped in just one blanket, it being sufficient to cover them, and their basket was placed next to the kitchen stove for warmth.

By Thursday, the five babies had broken the record as the longest surviving quintuplets. They had lost no weight and their pulses, respirations and organs were normal according to Dr. Dafoe.

The chances of all five reaching their first birthday are still 500 to 1 against them, but three days ago the chances were a billion to one against.

The incubator had arrived from Chicago and they were all resting comfortably beside their mother’s bed and the 30-year-old device was expected to increase the babies’ chance of survival.

The condition of the children has improved daily, but one of them is in a pretty bad way and it is doubtful if she will live. Three of the others are doing fairly well, and one is doing medium well. The Toronto Daily Star, Thursday, May 31, 1934

The babies were now being fed breast milk and were given as much as much as they could swallow by eye-dropper. Feedings throughout the night were being done by Nurse Yvonne Leoux by the light of a kerosene lamp and the local priest, Father Routhier was in constant attendance, supporting the family. The parents of the quintuplets had already received several offers to exhibit their children at the Century of Progress Exhibition in Chicago, including one for $10,000, but Father Routhier had turned down all of the offers on their behalf at least until the babies’ health was assured. Throughout the day, a nurse from Toronto, Jean Blewett, looked after the babies, communicating with the family through gestures, she speaking no French, and the family little English.

I think it was the worst experience of my life. I'd rather have a baby myself than go through that again.

‘It was the worst experience of my life,’ Mrs. Labelle, the local midwife, herself a mother of 18 children, said of the night that the quintuplets were born. She had previously attended more than 100 births in the surrounding area. The babies’ mother agreed, ‘I’m glad it is over,’ and ‘They are beautiful. I love them all.’

When asked by the reporter about the father, Oliva Dionne, Dr. Dafoe said that like the rest of them, he was a little shocked:

Oh, he was shocked – who wouldn’t be shocked? It upset him. He was horribly disconsolate, wondering how on earth he was going to raise them all. But he’ll come along. We’ve never lost a father yet.The Toronto Daily Star, Thursday, May 31, 1934

Reports that the Dionne family had signed a deal for $10,000 cash to exhibit the babies in Chicago angered Father Routhier when he heard them.

This is all silly; it is idiotic and it is doing all sorts of harm. Dionne has been on relief; this multiple birth doubles his financial burden, and many good friends had been coming forward to help. Now to read such idiotic reports as this one saying he gets $10,000 is to ruin all chance of further help.

Dr. Dafoe was equally incredulous about the reports, however his concern was for the babies, and he told the reporters that the idea was just simply preposterous.

These things are not my business. My task is to bring these five to normal babyhood and keep them healthy. This will require a minimum of six weeks. Should they be moved to Chicago or anywhere else in the meantime, they will surely die.The Toronto Daily Star, Friday, June 1, 1934

A contingent of wet nurses arrived at the farmhouse that day, to supplement the breast milk that was being imported daily from Chicago and Toronto. The babies, although they had lost a little weight, were all still doing well. The larger two spent some time in a basket by their mother’s bed while the smaller three stayed in the incubator.

On Saturday, after rumours of a Chicago deal to exhibit the quintuplets at the world’s fair and amid speculation that the family would attend the Canadian Exhibition in Toronto, it was reported that Mr. Dionne was making efforts to break the contract that he had signed with Chicago. He had reportedly journeyed to Orillia on Thursday and signed a contract for the exhibition but had since thought the better of it and had walked three miles to Callander to send a telegram asking to be released from the deal.

At the same time, the most delicate of the five Dionne babies weakened after a bad night. At 4 a.m. that morning it had seemed as though her heart might stop altogether and fears were felt for her life. As the baby turned blue from lack of oxygen, nurse Marie Cloutier gave her a little rum as a stimulant.

By Monday, as the quintuplets passed the one week anniversary of their birth, reports from the Dionne household were good. The babies, who had been showing symptoms of jaundice, were recovering nicely and had ‘passed a splendid night.’ One of the babies remained in the incubator sent from Chicago, while the other four were ensconced in a big incubator sent by the Toronto Star.

Over the weekend, a brush fire had broken out not far from the Dionne home, near the road that ran from Callander to the farm and had blackened about 40 acres before it could be controlled. As their neighbours battled the blaze, the babies’ two grandfathers, Olivier Dionne and Moise Legros spent some time at the farmhouse, guarding the family against curiousity seekers who drove from North Bay, hoping to get a glimpse of the babies. In the afternoon, they were relieved by two provincial constables who arrived to keep the family from being disturbed.

Four months later, the Ontario Government found the Dionne parents to be unfit for the care of the quintuplets and custody was withdrawn and the children were put under the care of Dr. Dafoe and two others. A hospital was built across the road from the Dionne homestead and the girls were moved there at the end of September, where they remained until 1943, when the Dionne parents won back custody. From 1934 to 1943, Quintland, as the hospital was known, attracted about 6,000 people a day with almost 3 million people visiting between 1936 and 1943.

In 1952, when the girls were 18 years old, they left the family and afterwards had little contact with them. Over the years, a number of films have depicted their story and several books have been written about their lives, the latest of which, Family Secrets, is an autobiography penned by Jean-Yves Soucy on behalf of Annette, Cecile and Yvonne. In this shocking book, the surviving Dionne quintuplets tell the story of their bizarre childhood and expose tales of physical and sexual abuse at the hands of their parents. 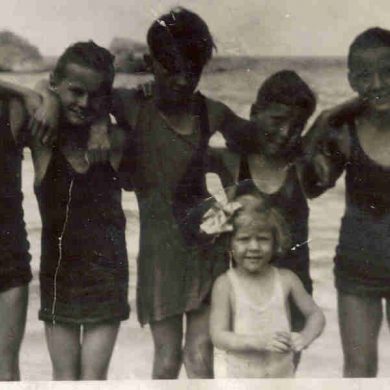 Crowds Flock to Sunnyside Beach in 1922