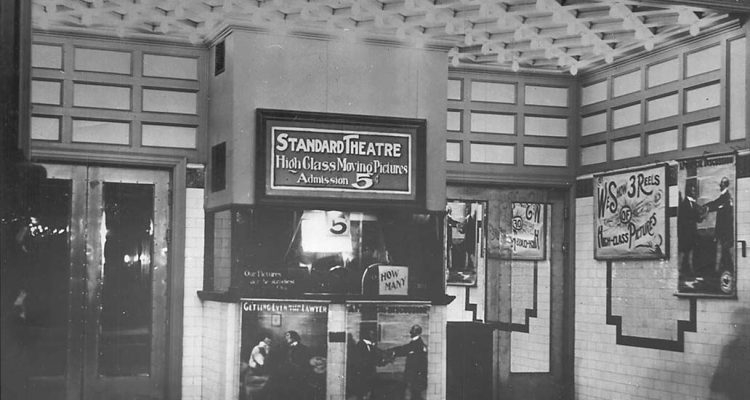 The motion picture industry was in its infancy when my grandfather started working for General Film in Montreal. Although very new, dedicated movie theatres were extremely popular in Montreal and in the early twentieth century, several theatres had opened in Montreal including the Ouimet in 1906 and the Nationoscope in 1907. By 1911, when John Arthur Bond went to work for General Film, nickelodeon theatres were popping up all over the United States and Canada in converted store fronts, charging five cents for admission, and offered a series of short films to audiences who sat in hard wooden chairs. The films were projected on screens on the back wall and the only sound might come from a piano set near the screen.

Films shown during these early years would have been of the silent movie type with stars such as the Toronto born Mary Pickford. They were longer than the previous ‘short’ films of the earlier years and a distribution network was soon established that allowed theatres a constantly changing offering of the latest films. In 1911, feature length movies such as the Italian produced L’Inferno were an hour or more in length and the story was augmented by the narrative, written in words on the screen.

As the popularity of motion pictures grew, the need for trained projectionists increased. Projection machines had to be constantly monitored to avoid stuttering of the film and many adjustments were necessary. Operators were trained in projector operation, either by apprenticing to learn their trade or even by taking classes on the subject. Not only was the projectionist a showman, he also had to understand the mechanics of the projector, the electronics of the lamps and have a strong and steady hand since most films were hand cranked by the projectionist, a feat that took considerable skill. Projection equipment generally consisted of a hand driven mechanism, a wooden table with collapsible legs, reels made of galvanized iron, cables for the power hookup for the light and a cloth bag to catch the film as it unwound from the machine.

Films would sometimes snap and the projectionist had to know how to splice it back together in such a way so as not to throw the picture out of frame. He had to ensure that the perforations or sprocket holes did not become damaged when preparing the splice and they were perfectly match so that the film did not jump while passing through the projector. The splice could not be too stiff or unbending and if it were too wide, it would not sit properly on the sprocket wheels. It was important that all of the emulsion be completely removed by scraping the film since the film cement would only work on the celluloid base of the film and if any emulsion remained, the splice would be weak and would inevitably fail once again. Finally, using just the right amount and type of cement was important. Too much cement would result in the film buckling or cupping after drying, again presenting a risk of jumping in the projector or further damage to the film.

The job of the projectionist was not only difficult but extremely dangerous. Because the nitrate film was very flammable, fire was a constant risk. The projection machines and their operators were housed in operator rooms, quite separate from the public parts of the theatre. Recommended materials for the building of a projection or operating room were brick, tile or cement due to the risk of fire. In the “Moving Picture World: The Film Index Exhibitors’ Guide” published in 1913, there were companies advertising fire insurance. One advertised premiums of five cents per day and warned

Your chance for fire once every three years comes as sure as taxes and death.

Building materials, such as asbestos, were used to reduce the risk of fire spread within the theatre. It was well known by experienced operators that the nitrate film would continue burning, even if submersed in water. It did not require oxygen since the chemical reaction of burning it produced its own supply and should a fire break out, the operator would grab any extra reels of film and exit the fire proofed room immediately, rather than trying to extinguish the flames.

Although ‘safety film’, made from acetate rather than a nitrate base was developed as early as 1909, it was used primarily in amateur home movies since not only was it difficult to splice, it was also subject to degradation over time. Movie theatres continued to use nitrate based films up until 1952 when Kodak began a four year program to discontinue nitrate based films in favour of the safer acetate base.

The idea of a fire starting in a crowded theatre was never far from the projectionist’s mind. By 1927, my grandfather had moved from Montreal to Toronto, but he no doubt read about the Laurier Palace Theatre fire in horror. Although the fire is not blamed on the ignition of the film, but on a carelessly discarded cigarette, the end result was still a tragic loss of life. The fire started in the early afternoon of Sunday, January 9, 1927 during a showing of a comedy film called ‘Get ‘Em Young.’  The theatre was filled with about 800 children and as the smoke began to fill the theatre, panic erupted and children began to flee down the one available set of stairs to the exit. The door at the bottom of the staircase opened inwards and the children piled up at the foot of the stairs, unable to open the door. Although the fire department responded quickly, 78 children were killed in the tragic accident although all but two died from crushing or asphyxiation, rather than from the fire itself. The fact that so many unaccompanied children were at the theatre was brought out in the inquest since the Quebec law stated that all children under the age of 16 must be accompanied by an adult when attending a motion picture show.

The children later identified at the morgue after the fire ranged from 4-1/2 years old to 16 years old although most were under 10 years of age.

No person or persons in charge of a moving picture hall where shows are given by means of a cinematograph and in the case of a company or partnership, no manager or other person in charge of the establishment, shall receive in any way, at such shows, any child less than sixteen years of age, unless such child be accompanied by his or her father, mother, tutor or teacher, or by a guardian specially authorized by the father or mother.The Montreal Gazette, 10 January 1927

As with all new technology, there were those who thought that the motion picture industry wouldn’t or shouldn’t last. There was a concern that watching films could damage eyesight as this public health official warned in the 1920’s.

Motion pictures will be extinct in ten years. The public realization that they are ruining the eyesight will lead to a demand that they be abolished. Within ten years I predict that there will be no more motion picture shows in America. By that time they will be barred as a pernicious evil. They will be dropped by common consent for the common good as other useless things have been dropped in the past.The Motion Picture Projectionist journal, October 1927

Those in the film industry counter argued that movies did not cause eye trouble but instead did sometimes reveal the existence of it, an argument still going on amongst experts even today with the emergence of 3D films.

The oldest known surviving film is the Roundhay Garden Scene, shot by Louise Le Prince with a single-lens camera in 1888. It was taken in Leeds, Yorkshire in the Whitley family garden in Oakwood Grange Road.

The first truly successful film projector was invented by the Lumiere brothers and their first film was created in 1895 and showed the workers leaving the Lumiere factory.

My grandfather began his career in the motion picture industry in 1911 when he went to work for General Film in Montreal. He moved to Toronto at the outbreak of World War I and returned there afterwards to marry my grandmother, continuing his career in the film industry. In 1945, when he joined the Canadian Picture Pioneers, he was working for Columbia Pictures in Toronto. He retired on 16 October 1962 having been the projectionist at the Hollywood Theatre. The Hollywood was located on the east side of Yonge Street just north of St. Clair Avenue and opened in 1930, the first purpose built theatre for talking pictures. It was eventually sold to Famous Players and my grandfather worked as a projectionist there. The theatre eventually became unprofitable and it was closed in 1999 and the building was demolished.