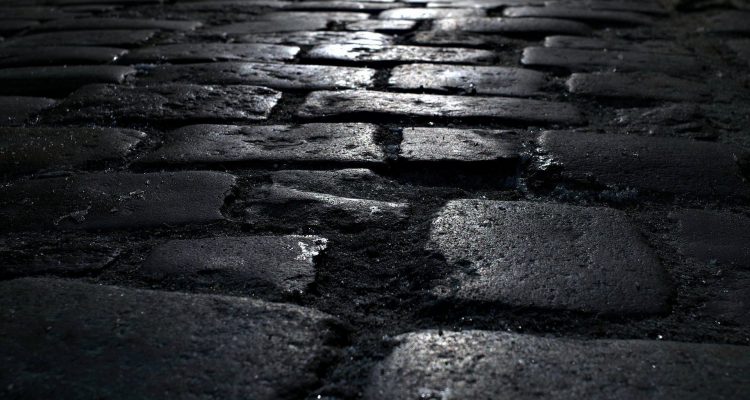 On the evening of 27 July 1827, 23-year-old Susannah Poole left her sister’s house at 3 Caroline Street near Commercial Road at about quarter to ten. Susannah had been living with her sister, Ann Elizabeth Parker, for about five months, ever since leaving the service of her last employer in Hackney. That night, Susannah had decided to see her mother on North Street in Stepney where she wanted to visit with her parents, two brothers and sister and pick up a few things she needed. She was planning to stay the night.

Her route took her past the Stepney Toll Gate.

As she arrived at the toll gate, the toll keeper, James Const, called out to her, but she took no notice of him and walked on. Const left his post at the gate, followed her and seized her around the waist dragging her towards the toll-house as she kicked and tried to pull away.

At the door, she put her hands against the door-posts, trying desperately to prevent him from dragging her inside. As they struggled, she managed to scream ‘Murder!’ loudly just before Const put his hand over her mouth and she could only hope someone had heard her. Const forced her inside, groping at her clothes and finally shoving her to the ground where she continued to fight him, despite feeling faint. Her bonnet came off and bent. She struggled more, even banging her nose and causing it to bleed, leaving smears of blood on her damaged bonnet and on the carpeted floor.

But despite her struggles and screaming, James Const raped her.

A knock sounded on the door of the toll-house then and a voice called: ‘For God’s sake, let the female out, we shall get ourselves into trouble,’ but Const answered, ‘Go your rounds, it is all right.’

He helped Susannah into a chair then and fetched a drink in a wine glass. He tried to give her some of what was in the glass, but she closed her teeth, refusing to drink it and it trickled down onto her clothes and the floor. When a second knock sounded, he rose and locked the door, and forced Susannah to the ground once more.

A half hour passed as he raped her again.

A voice again called to ‘Let the female out’ but Const called back ‘I will not let her out until she has recovered.’

Finally, after a third knock, he unlocked the door and Susannah saw the watchman, Joseph Coltman, standing outside.

‘How cruel it was for you to hear me so ill used, and hear me cry murder, and not come to my assistance!’ Susannah told him.

James Const then told Susannah he was a married man, and adjusting her dress, he asked her to keep quiet. He then told Coltman to see Susannah home

A local constable approached the three and seeing the state of the young girl, he asked her what the matter was. She told him that she had been very ill used, and that the watchman had heard her cry out but had done nothing. The constable went to the toll house, presumably to speak to Const and returned a few minutes later.

Constable Callender then pulled out a staff, introduced himself and then he, along with headborough William Thompson, walked her to her mother’s house on North Street before returning to the toll house.

On the way back to the toll house, Collender told Thompson that Susannah was a loose character, and he believed he had seen her about the road. He also told Thompson that he would go and see Const and have a bit of fun with him by frightening him.

When Collender returned to the toll-bar, he found Const at the toll house. When he came out, the watchman, Coltman, put his hand on Const’s shoulder and said, ‘This is bad job, we shall lose our places.’ Const replied, ‘Aye and worse than that, I am afraid.’

Const then told Collender, ‘I did not hurt the girl, and as we are all young men I will tell you all about it.’ He told the constable then what had happened although he initially denied having consumated the rape but eventually admitted the truth of it. Const then asked Collender to keep the matter quiet as he did not want his wife or his employer to hear of it. He asked the constable to go to Susannah and try and make it up, but Collender told Const it was a serious matter and that he was on his own.

The following morning when Susannah returned home to her sister’s house, she told her what happened, showing her and Mrs. Sumner, who was there at the time, her injuries. Her sister then took Susannah and went to hunt down James Const whom they found at the Poplar Gate. When Ann Parker confronted him, Const begged her not to tell her husband and told her he would make whatever compensation for what happened that he could.

On Monday, ignoring Const’s plea, Ann Elizabeth Parker took her sister to the Thames Police and swore out a complaint against James Const.

A warrant was issued.

The following day, Tuesday, Susannah went before a Magistrate and on his order, she was examined by a surgeon named Clelland.

Clelland, an apothecary and accoucheur from Cockhill Ratcliff, saw Susannah at the public house opposite the office. He did not find a mark of violence on her, not a bruise or laceration, which he later testified that he had found odd.

Susannah’s brother hired Mr. Bagley, an attorney, to persecute and the trial proceeded on Thursday 13 September at the Old Bailey with 21-year-old James Const capitally indicted for committing rape and the witness, Joshua Coltman, indicted for standing by, and aiding and abetting Const.

After the jury had heard evidence from all parties including seven witnesses who gave an excellent character of the accused, the judge summed up the case in detail. The jury then retired and after a half hour of deliberation, they returned a verdict of Guilty. Since rape was a capital offence, the penalty was death, although the jury recommended mercy for the prisoner because of his youth and family. Coltman was acquitted of all charges.

In a low voice, James Const said, ‘I sincerely thank you Gentlemen of the Jury, for recommending of me to mercy; and your Lordship, for what you have been pleased to say. I am innocent of the crime laid to my charge.’

He was taken to Newgate prison to await his fate.

After the conviction, James Const’s father campaigned to save the live of his son. The gentlemen of the jury who had convicted Const met to hear new evidence towards the end of November 1827. A Surgeon from the Stepney neighbourhood identified Susannah Poole as a person he had treated when she was confined and the jury felt this new information cast doubt on her testimony at the trial. They agreed that had they heard all at the trial, it was possible they might not have voted to convict.

In December, after recommendations were heard, his Majesty the King commuted the sentence of death against James Const to transportation for life to New South Wales.

On 6 March 1828, James Const was transferred to the prison hulk Leviathan in Portsmouth to await transportation.

After almost four months aboard the hulk, James Const was one of the 178 convicts who left Portsmouth aboard the Marquis of Hastings on 29 June 1828, bound for New South Wales.

The Surgeon of the Marquis of Hastings, William Rae, kept a journal, recording the journey to New South Wales between the 29 June when they left Portsmouth and 9th October when they arrived in Sydney harbour before reaching their final destination of Port Jackson on 12 October 1828.

Other than a gale on 12 September, the voyage was relatively uneventful and most of the prisoners remained healthy.

Rae wrote: ‘Suffice it to say in conclusion, therefore, that the provisions and other articles put on board were all of a good quality and regularly supplied by the master of the ship from whom, and his officers I received every assistance in the execution of my duty and it is but Justice to the Master to observe that his ship was clean, well managed and in every respect superior to the majority of ships employed in this service.’

After thirteen years in New South Wales, James Const received a conditional pardon for his crime of rape on 1 April 1841. Although now free to go on with his life, the conditions of Const’s pardon required him to remain in New South Wales rather than returning to England.

His wife and family back in England were out of sight and out of mind and in 1842, James Const married Helen Taylor at St Andrew’s Scots Church in Sydney, Australia.

When he was transported to New South Wales, James Const left behind his wife Mary Ann who he had married 31 August 1822. Abandoned, Mary Ann was left on her own to raise their daughter, Caroline Mary Const, who was five-years-old and their son, Henry James Const, who was born four and a half months after the rape.

On 4 February 1836, almost eight years after James was transported, Mary Ann Const married again, claiming to be a widow. She wed Henry William Gill on 4 Feburary 1836 at St. Bride on Fleet Street. Her second husband turned out to be a poor choice as well since on 13 May 1839, just three years later, Henry William Gill was convicted of embezzlement at the Old Bailey and served 3 months in Newgate.

Susannah Poole
I have been unable to determine what happened to Susannah Poole or her family after the trial in 1827. Perhaps she moved, married or emigrated to escape the stigma of the trial.

Rape in the Nineteenth Century

The conviction of James Const for the crime of rape against Susannah Poole is unusual for its time. Prior to 1841, when the crime of rape was a capital offence in England, few men accused were convicted of the crime. The Magistrate often declined to bring the charge and if it went to trial, the jury often chose not to find the accused guilty.

In 1788, a book entitled Elements of medical jurisprudence: or, A succinct and compendious description of such tokens in the human body as are requisite to determine the judgment of a coroner, and of courts of law, in cases of divorce, rape, murder was published by Samuel Farr as an aid to those who had to sit in judgement on capital crimes.

In the chapter on rape, he wrote that rape seemed impossible since a woman ‘always processes sufficient power by drawing back her limbs and by the force of her hands, to prevent the insertion of the penis into her body.’

He went on to say that if a woman were to become pregnant as a result of rape, that too was proof that rape did not occur since ‘For without an excitation of lust, or the enjoyment of pleasure in the venereal act, no conception can probably take place. So that if an absolute rape were to be perpetrated, it is not likely she would become pregnant.’

Between 1670 and 1839, 80% of those charged at the Old Bailey were acquitted and only 20% were found guilty. After 1841, when death was no longer the penalty for rape, more than 50% of those accused of rape were convicted, but given the attitudes towards women during the nineteenth century, no doubt many men who were guilty still walked away free.

My heart breaks for all those women who were sexually assaulted and saw their attackers acquitted and I know if they were still alive today, they would be standing up to say #metoo.