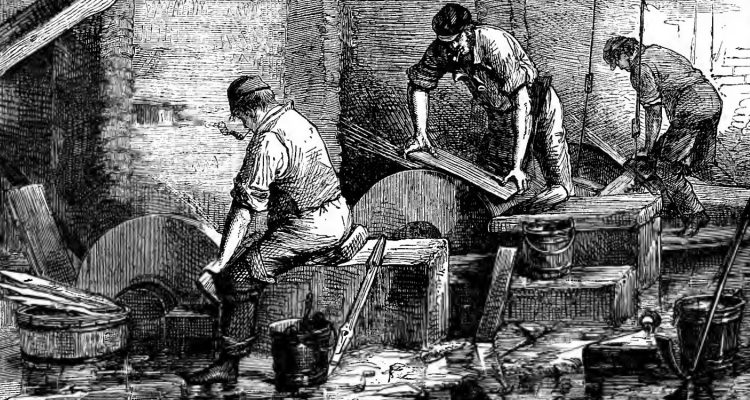 Sometimes a file grinder would sublet troughs from a hull or sometimes he would rent a hull and employ apprentices to work in the other troughs. File grinding could pay relatively well; with some earning as much as 27 to 35 shillings a week in the mid nineteenth century but it was a hard job. Men who worked as file grinders, especially those who worked at ‘dry grinding’ often developed grinder’s phthisis, a common term for any one of a number of lung diseases and many did not live beyond their thirtieth birthday. Those who did not die from severe respiratory ailments at an early age were debilitated by them and few were able to work beyond the age of fifty.

Those who did not die from severe respiratory ailments at an early age were debilitated by them and few were able to work beyond the age of fifty. Injuries were common and often deadly.

Boys, often sons of grinders, as young as seven or eight were employed in the Sheffield wheels and their young lungs were particularly susceptible to the dust. They were usually employed in polishing and frequently suffered from coughing and shortness of breath. In this way, many families lost generation after generation to the file grinders’ trade.

Injury, too, was common place amongst file grinders. Rapidly spinning wheels were sometimes known to shatter, flinging stone everywhere. Most file grinders had been struck many times by the debris, and often sustained cuts and bruises, lost teeth and sometimes were even killed.

High carbon steel was heated and shaped by hammering it into the correct length and shape. The file blank would usually include a tang on one end onto which a handle could be fastened. Once the file was annealed, the file grinder would remove any excess material using wet grinding in order to make the surface to be cut as level as possible.

When a new stone was received from the quarry, a rough hole would be drilled through it so it could be mounted on the axle. Once the stone was in place, the grinder would race or hack the stone, making it round and true, by holding a steel bar against it to square it while it slowly rotated. This process could take between a half to one hour, depending on the size of the stone, and generated large amounts of dust since it was done dry. Once the grinding stone was prepared, the file grinder would sit on his horsing, leaning over the grinding stone, and hold the file against the wheel while it turned away from him. The stones used for file grinding were generally sand-stone which was compact, sharp and rough. They were large, as big as six feet in diameter, and about eight inches across. The grinding stone would spin, suspended on an axle, above a trough containing water. Dust mixed with water was thrown during the grinding process and consequently, file grinders were often wet. As the stone was used, it would become clogged with metal and dirt, and grinders would rod or clean the stone, sometimes as often as thirty or forty times a day. Over time, the stones would wear away from use and when they were too small for file grinding, they were set aside for grinding other articles.

Trade Unions and the Sheffield Outrages

As early as 1822, there was an alliance of six cutlery trade unions in Sheffield, united under the name Sheffield Mechanical Trades Association. By 1838, the Alliance of Organized Trades was formed. Under this alliance were many grinders’ trade unions including the Knife Grinders Union, the Saw Grinders Union and the File Grinders Union. As a member of the union, a grinder would be expected to pay union dues. In the mid 1850’s the dues or natty would be about 4 shillings a week. Grinders that refused to pay their dues would sometimes have their tools or supplies broken or stolen to prevent them from working, a practice referred to as rattening.

On 23 May 1867, a Royal Commission on Trade Unions was appointed to make an inquiry respecting Trade Unions and other Associations of Employers or Workmen. The Commission publicised their appointment by placing advertisements in the Sheffield newspapers and posting notices throughout Sheffield. They requested that all persons who could give information on the subject of Trade Unions come forward to testify and a large number of cases were brought before them.

The earliest case that came before the Commission was that of Elisha Parker. He was a file grinder living about five miles from Sheffield, in Dore. In 1853, he was working for Messrs. Newbould, who employed two non-union men. Parker was repeatedly asked by the union to stop working for Messrs. Newbould but he refused. In July of that year, his horse was found hamstrung in a field where it had been grazing, and it had to be put down. Broadhead, the secretary of the Saw Grinders’ Union, confessed that he had hired three men to commit the outrage to Parker’s horse. Parker refused to pay further union dues until the union compensated him for the loss of his horse. In response, in March 1854 the union made an attempt to blow up his house using gunpowder but fortunately all that was damaged was the door. When Parker still refused to pay the union, he was shot at close range and suffered from a shattered arm. He narrowly escaped amputation and was in the infirmary for eleven weeks. It was a year before he could resume work and he never fully recovered from the injury. Before he was released from the infirmary, on the advice of his brother, he resumed paying his union dues.

Another such case was that of George Gillot. On 25 April 1857, George Gillot’s house exploded, blown up with a can of gun powder. He had stopped paying his union dues and had more apprentices than were allowed by the trade. He worked at the Tower wheel where security was tight and rattening was almost impossible. On the night in question, he and his wife, their two children and two of his apprentices were in bed sleeping. Someone threw a can of gunpowder into his cellar and it exploded. Although no one in the household was injured, the blast blew down one wall of his house and great damage was done to his furniture. The perpetrators were never uncovered but the Commission was convinced that this was a trade outrage.

Yet another case was that of William Torr. He paid file grinders less than the union scale. His factory was picketed, his warehouse broken into, the cistern containing preparation for hardening was tapped three separate times, his bellows were cut and books of trade were stolen. As was typical, the perpetrators were never apprehended but it was concluded by the Commission that these outrages were arranged by the File Grinders’ Union.

In response to the findings of the Commission, the Sheffield Trade Unions responded to the major crisis that they found themselves in by trying to create a more positive public impression. Although the practices of rattening and assault to enforce union rules continued for several decades, over time the violence of prior years began to recede and the Unions reinvented themselves as an organisation standing for their fellow workmen.

Hull: A room in a wheel.

Trow or Trough: A grinding station in a hull.

Grinding Stone: A large wheel of sandstone for grinding.

Glazer: A wooden wheel covered in leather and dressed with glue and emery.

Lap: A wooden tool faced with lead used in finishing.

Polisher: A small wheel covered in leather for polishing.

Diseases of Artisans Employed in Working in Metals