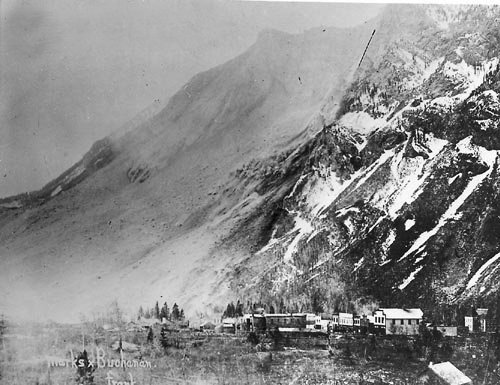 Nestled into the side of Turtle Mountain in the Crowsnest Pass area of the Albert District of the Northwest Territories of Canada, the small town of Frank, Alberta was established to support the miners who came to work in the Frank Mine. After the Canadian-American Coal and Coke Company opened the Frank Mine in September 1901, the small community of Frank began to grow around it as cottages for the miners and their families were built, a school was established, and four hotels were erected. Named after  Henry Frank, one of the founders of the company, by 1903 the town was home to six hundred people.

In the early hours of the morning on 29 April 1903, most of the residents of Frank were sleeping. Just after 4 am, the quiet of the cold spring morning was shattered by a deafening rumbling sound.

Within 100 seconds, 82 million tonnes of limestone broke off the top of the mountain and thundered down the east face at 70 miles per hour, crushing everything in it’s path, and burying everything under dozens of feet of rock. The slide narrowly missed hitting the town of Frank head on, just clipping the eastern end of the community.

When Turtle Mountain came down in what would come to be called the Frank Rock Slide, there were twenty miners working at the mine. Three were topside and were killed instantly by falling rock. The remaining seventeen found themselves trapped underground, buried under tons of rock. The river, dammed by the slide had risen and was pouring into the mine through a secondary tunnel.

One of the trapped miners, Joseph Chapman, later recounted:

I was one of the seventeen men in the mine when the fall took place. I felt the concussion very severe. I was a top of number 8 manway, and I noticed that the air in the workings was forcing everything before it towards the outside of the mountain, and the coal began to fall, and threatened to close the same. I started to make down the manway. We arranged that those who were not cutting would have to sit to one side out of the road, while some were cutting timbers and others were keeping close watch on the lamps. Some went back for timbers, and so we worked on for about an hour, when we found that the air was getting bad. We then decided we would kill the horses in a few minutes if the air did not clear.

Two decided to go back to No. 8 manway to see if they could attempt to go out through the upper tunnel. They found they could hardly keep their lamps lit in the manway, so they came back behind us. They could see it coming in the manway.

By the time I got down there were three other men in the crosscut, and one of them, Evan Jones, called me to help him to pull a man out who had been closed in the crosscut. We got him out, and they all started down the manway. We decided to wait until 7 o’clock in the morning to see if we couldn’t hear anyone outside, and if we couldn’t hear anyone at that time we were to start and cut through. When 7 o’clock came we failed to hear anyone. We pounded on the rail there for about five minutes several times, but failed to get an answer.

So, the air beginning to get foul, we decided to make haste and do what we could. So they went down into the bottom level to see how the water was, and they reported that 24 hours, as nearly as they could tell, would fetch the water into the cutting where we were working. We decided our time was limited, and we should have to pound for all we were worth to try to get out. We finally decided to remove all we could between the rocks, we shoved the smallest man in the crowd through as far as we could and let him shout for help. Evan Jones said he would be satisfied to let us shove him up, so we finally got him through and he got others to help us move the rocks and get out all our gang. Seventeen in all got safely out.

I neither felt not heard any explosion inside the mine until the force of air struck me and very nearly picked me up and threw me back into the manway. The blast was full of coal dust. My opinion expressed to my companions was that a hot wave of air had mixed with a cold one and had exploded the cold one. I attributed the hot wave to be caused by something wrong with the boiler. Jones agreed with me. McKenzie also. I think the fall of rock was caused by some disturbance of the earth.1The Toronto Star, Saturday, May 2, 1903

The death toll was uncertain. Estimates ranged from 70 to 90 dead. Most victims remained buried under the rubble. Those reported dead were later found alive and those thought to have survived were later reported as dead.

One of the first reports about the slide was issued from Macleod, a town about fifty miles east of Frank, when a witness arrived there on the following day:

J. Samons, a Winnipeg man, has just arrived from Frank. He says the noise was terrific in the neighborhood of the explosion caused by escaping gas and falling rocks. It is reported here that about 160 have been killed; two miles square of valley is filled in a hundred feet deep by the explosion; a hundred miners’ cottages buried; eighteen miners have been taken from the mine, and five of them dead. Several more are imprisoned, and they are probably dead. Two ranchers, named Graham, with their families, were buried under the debris. A special train is just leaving here, W.M. Pearce, inspector of mines, with a dozen Mounted Police, has just arrived here from Calgary on their way to the disaster, also with doctors, and nurses.2The Daily Herald, Calgary, Thursday, April 30, 1903

William Pearce, the Inspector of Mines, sent the following dispatches to the Interior Department on 30 April 1903 after he reached the scene:

Eighty-three killed, of whom about fifteen are women and children. It is thought that there will be no trouble from damming the river. Rock slide about four thousand feet long, extending from the highest point of Turtle Mountain; westerly, end of slide 33 feet west of mouth of tunnel, extending across the valley and up the opposite bank for about one an one-quarter miles from front of Turtle Mountain and spread out fan shaped so that at extreme end of the slide it was nearly two miles wide. No trace of river for one mile, but water now going through rock as fast as coming down. Place very orderly this morning. Men that were drunk and disorderly yesterday morning gone to Blairmore, fearing further slide. Not probable there will be further slide of any consequence.3The Toronto Star, Friday, May 1, 1903

Then in a later report, the list of deaths and injuries was revised:

The following is probably more nearly a correct estimate of the loss than any yet: thirty-four men, 8 women, 20 children, killed. 11 injured, probably only two or three dangerously. Have good attendance. Only two killed in or near the mine. Ten bodies recovered; remainder nearly all buried under many feet of rock. Possibly a few near edge of slide may be recovered. The killed include 21 miners, and balance ranchers, merchants, liverymen, engineers, railway contractors, and labourers. Six cottages totally destroyed by rock and swept away like feathers.4The Toronto Star, Friday, May 1, 1903

Besides the incredible survival of the seventeen miners, a other residents of Frank had miraculous escapes:

In the house of Sam Innes were quietly sleeping Innes, his wife, and three children. The house was overturned three times, and yet the occupants were practically uninjured. This was the only house caught in the slide in which the occupants survived.5The Toronto Star, Friday, May 1, 1903

In the home of one of the Finn miners, a baby came some three months ago. The slide destroyed the house and the lives of seven occupants. None were found except the wee babe, who was discovered in a crevice one hundred yards from where the house stood, naked but alive, unhurt and crying with exposure.6The Toronto Star, Friday, May 1, 1903

The stables of the Canada-American Coal and Coke Company held fifty horses. Of this immense building, not a vestige remains. It is covered by fifty feet of rock. A tiny terrier pup was the only creature saved.7The Toronto Star, Friday, May 1, 1903

Three girls of the family of Alex. Leitch, formerly of Oak Lake, Manitoba, were rescued alive, while their mother and father and four brothers were instantly killed.8The Daily Herald, Calgary, Thursday, April 30, 1903

An unattributed account of the disaster was issued by a reporter from The Daily Herald, on scene in Frank on 30 April 1903:

The time of the disaster was 4:15 Wednesday morning when the residents of the town were awakened by a deafening tumult and a shaking of buildings which seemed as if it would rattle them into complete demolition. Of all the town inhabitants numbering nearly 1,000, not one professes to have reached the outside of their domain in time to see any part of what took place, but when day dawned it was seen that the whole side of Turtle mountain had fallen away; and the country extending from the eastern edge of the town for two miles down the pass, and entirely across the pass, a distance of two miles or more from the mountain, lay buried beneath, rock and debris of various kinds for a depth varying from twenty-five to one hundred feet.

In its sweep the great slide, if slide it was or upheaval, if that be the more proper characterization, demolished and carried away the entire operating plant of the Coal company, the tipple boiler and engine house, electric light plant, railway scales, shops and a row of coke ovens, destroying seven houses owned by the company, burying six of them with most of their occupants and likewise burying ten other habitations situated in the valley of the town, together with every soul within them.9The Daily Herald, Calgary, Thursday, April 30, 1903

Destroyed in seconds, The Frank Slide - 1903