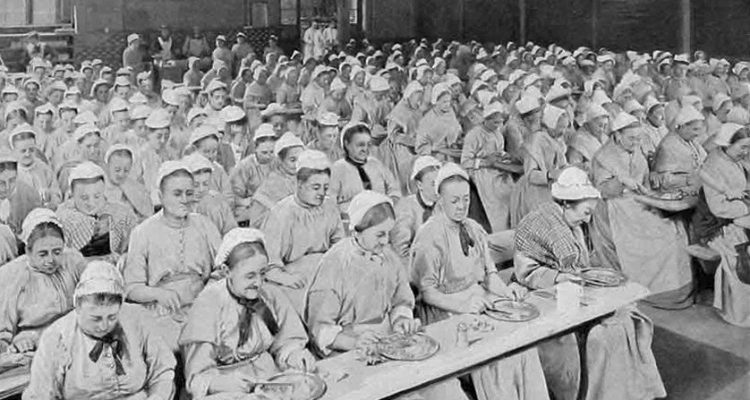 Give Us This Day Our Daily Bread

The Staff of Life

For labourers in the nineteenth century, bread was indeed the staff of life. For the very poor, it was often all they could afford and sometimes even more than they could afford. From 1793 when Britain became involved in the French Wars (1793-1815), the price of bread increased so dramatically that many labourers could no longer afford to feed themselves. The magistrates of the Berkshire village of Speen held a meeting on 6 May 1795 to discuss the plight of the working poor and concluded that the minimum wage of day labourers should be supplemented as necessary based on the price of bread and the number in his family.

That is to say, when the Gallon Loaf of Second Flour, Weighing 8lb. 11ozs. [3.9 kg] shall cost 1s. then every poor and industrious man shall have for his own support 3s. weekly, either produced by his own or his family’s labour, or an allowance from the poor rates, and for the support of his wife and every other of his family, 1s. 6d.Victorian Web: The Speenhamland System. by Marjie Bloy, Ph. D., Senior Research Fellow

According to Mrs. Beecher, 1Beecher, Mrs. H.W., The Home, how to Make and Keep it, Minneapolis, Minnesota: 1885 the finest bread is made from the finest ingredients. First quality flour left to rest at least a month after grinding and an excellent yeast are paramount to a light and tender loaf. Although it makes the baker’s job easier, too much yeast will yield a bitter loaf that tastes of hops. Instead, a sponge should be made with half a small cake of yeast, a quart of water, a teaspoonful of salt and two teaspoonsful of granulated sugar and allowed to soak overnight. In the morning, the sponge should be foaming but sweet. Rub a piece of butter into enough flour for four loaves and then stir down the sponge and add the flour mixture. Stir in a pint of warm milk and chop with a knife for about five minutes, kneading it together into a ball in between chopping.

Put the dough into a bread bowl, cover well to protect from drafts and set it to rise by the stove. Do not make the dough too stiff. Within the hour, the bread dough should be like a puff-ball. Use as little flour as possible while kneading and do not knead to long or too roughly. Use a light touch for the most tender bread. When kneading, the dough should be brought in from all sides, the outside turned inward, the middle outward, with each movement. When a blow with the fist in the centre makes the dough rebound like a rubber ball, it has been kneaded enough.

Turn it out onto the breadboard and divide into four loaves, lightly moulding for three to four minutes. Place into well buttered baking-pans. Butter the tops lightly and leave to rise for about half an hour. Place in the oven and bake until golden brown and then set aside to cool.

The oven should be hot enough to prevent further fermentation, but not so hot to prevent further rising. Manage the heat well. If the oven is too hot, the bread will brown on the outside before reaching the inside, resulting in a heavy middle. Hold your bare arm in the oven. If you cannot leave it there while counting to thirty, the oven is too hot. Let it cool before putting your bread to bake.

Let the temperature stand for the first ten minutes of baking and then raise it a little more. One hour is about the right amount of time for a loaf of white wheat bread to bake. Do not open the oven door more often than absolutely necessary and take care that the stove does not get a draft during baking.

By now perhaps you are imagining the smell of fresh baked bread and your mouth might be watering just a little. Do you presume that the bread your ancestors ate was wholesome and free from additives, freshly baked each day with pure ingredients? Nothing could be further from the truth.

In 1872, in Arthur Hill Haskall’s expose on food, Food: Its Adulterations, and the Methods for Their Detection, 2Haskall, Arthur Hill. Food: Its Adulterations, and the Methods for Their Detection. London: 1872. he talked about ‘cheap’ bread, saying it was frequently made of inferior flour and was often mixed with salt, potatoes, rice and other flours and the additive of alum which could interfere with digestion of nutrients in other foods and lead to acidity of the stomach and dyspepsia. Another substitute for alum was sulphate of copper, which, although used in small quantities, was very poisonous and would ‘be sure to act injuriously in the long run.’

Commercially available breads might contain an excess of water, for, since loaves were sold by weight, this increased the profits of the baker. To increase the water retained in bread, some bakers might have baked their bread in a very hot oven, resulting in a quick forming crust and a soggy interior. They might also have thrown sacks over the bread after the loaves were removed from the oven, preventing the dissipation of some of the water. Adding boiled rice to the bread was another way that bakers retained water in their loaves.

The addition of alum made the bread unnaturally white and the quantity required to so so varied according to the age and condition of the flour. For new flour, bakers might employ half a pound with a sack of flour weighing 240 pounds while older flour would yield white bread without the addition of alum. Even when bakers added no alum, it was sometimes to be found in their bread since it was added by the miller.

Haskall’s book caused such a sensation that many food manufacturers requested that he test their products and used his name within their advertisements as a badge of wholesomeness.

Beyond additives and adulterations, there were also the reports of general uncleanliness of the bakeries. From one 1862 newspaper comes the following description of bakehouses in London:

Mr. Tremenheere visited ten bakehouses London, without any knowledge beforehand of their character, and which, he says, were allowed to be fair types of their class. The principal fact which struck him, and for which he certainly was not prepared, he says, was their extreme dirt. In many cases the space between the rafters was covered with cobwebs, hanging so closely that a heavy footfall above must bring large fragments down into the dough beneath. Animals in considerable numbers crawled in and out of the troughs in which the bread is made, and on the walls. The smells from the drains, &c, were very offensive, the draught of the oven continually drawing the effluvia through the bakehouse, and in every case there was a total absence of ventilation. Rats and mice of course abounded.Hertford Mercury and Reformer - Saturday 06 September 1862

Our ancestors had a waste not, want not attitude and were sure to use up any leftover food. Nothing went to the slops. Leftover bread could be dried and used in stuffings, or as breading for meat. Dried bread could be soaked in sweet milk and used in pancakes or griddle-cakes. One of the favourite uses for leftover bread was a bread and butter pudding. Sometimes these were flavoured with currants or raisins and for a special treat, the bread might have been spread with a favourite jam or preserves.

Butter a dish, and lay thin slices of bread and butter all over. Strew on a few currants picked and washed clean, then a row of bread and butter, then currants again, and so till the bread and butter is all in; then take a pint of milk, beat up four eggs, a little salt, and half a nutmeg grated. Mix all together with sugar to taste: pour it over, and bake it half an hour.Holland, Mary. The Complete Economical Cook, and Frugal Housewife. London, 1843