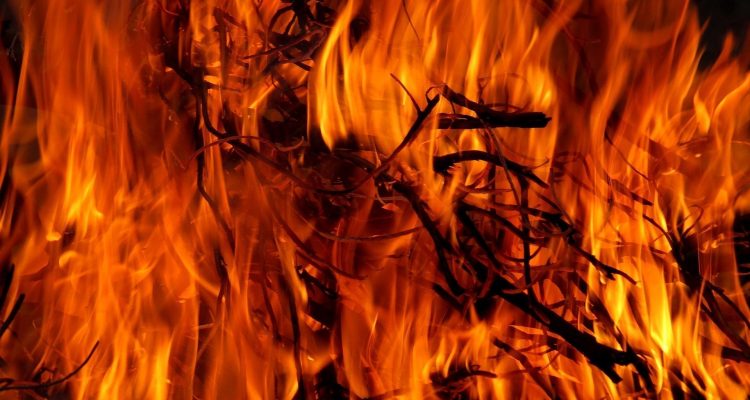 In Northern Ontario, the unusually hot and dry conditions that had prevailed throughout the summer of 1922 continued unabated into the autumn. Concerned about the approaching ‘burning’ season, local fire rangers asked for their contracts to be extended beyond mid-September, but the government denied their request and the rangers left the Temiskaming area on September 12 as scheduled. Homesteaders in the area, no longer requiring permits to set the small fires they routinely used to help clear their small holdings, began to set controlled burns to remove brush and scrub from their properties. Used to the smell of smoke in the area in the fall, townspeople in Haileybury, Charlton and other rural communities went on about their daily business, unconcerned.

Then at noon on Wednesday October 4, the autumn breezes began to intensify and by late afternoon strong gale force winds began whipping the small clearing fires onward, merging them into raging infernos that raced to devour everything in their path. From Englehart and Charlton in the north to Haileybury and Cobalt in the south, smoke began to fill the skies, obscuring the sun and residents began to sound the alarm. Men rushed from their work places, children were let out of school and frantic mothers stood on their porches searching for their loved ones through the swirling smoke.

In Charlton, thirty-seven year old mother Annie Brown watched the suffocating smoke rolling into town in utter disbelief. Little more than two months earlier a fire had razed the family’s homestead in Leeville in Tudhope Township. Thankfully she and her six young children had been away camping in the Hills Lake district where her husband George was fire ranging, but their home, their furniture and all their belongings were destroyed in the blaze. In the four years since they had arrived in Northern Ontario, the Brown family had struggled to clear the land on their one hundred and sixty acre property, build a house and put sixteen acres under cultivation and within the space of an afternoon, it had all been taken away. And now fire was threatening her family again.

As the flames grew nearer to the town, the Brown family along with other residents of Charlton ran for their lives, some plunging into the river while others crowded into the concrete power house building. As night fell, the refugees inside the power house covered the windows with blankets and doused them with water while blazing cinders and sparks showered the building. The men took turns going out to look for survivors and bringing them through the acrid smoke to the comparative safety of the makeshift shelter. At some point during the darkest hours that night in the midst of the fire’s siege, a baby was born to Mrs. Reginald Thompson, one of the sheltering women. By morning, the winds had subsided, the temperatures began to plummet and a cold rain mixed with snow extinguished the remaining flames. George Brown left the power house with a bucket and finding a cow, he milked it and brought the milk back for the children in the power house. On his return, he reported that the power house, the station house and one farm were all that remained of Charlton.

Refugees shivering in sudden cold began to survey the overwhelming damage meted out by the devastating conflagration. As rescue efforts got underway and aide began to flow into the area, stories of heroism, bravery and close escapes began to emerge. Billie Weeks, a road foreman from Englehart, made ten trips between Englehart and Charlton through the choking smoke and blistering flames, rescuing about one hundred and fifty people in his Gray Dort roadster until his tires melted away from the intense heat. Gervais Sutherland, firefighter in Haileybury, lost his life when he gave up his seat in a packed automobile to two small children so they could be carried to the safety of the lakeshore. A fourteen-year-old girl saved her young brother and sister by taking refuge in a culvert alongside a bear also trying to escape the flames. In Haileybury, the nurses from the hospital took to the river with their patients, holding wet blankets over their heads as the fire raged around them.

As news of the devastation spread, relief efforts were organised. Warm clothing, blankets, tar felt paper, doors, window glass and lumber were collected by the Red Cross to be sent north by train. Food including 21,000 loaves of bread, 170,000 pounds of flour, meat and almost 14,000 tins of evaporated and condensed milk were dispatched along with fodder for the surviving livestock. At the innovative suggestion of the Toronto Transit Commission, the City of Toronto sent a total of eight-seven retired streetcars north, to be used as temporary business offices or living quarters for the homeless.

In total, the Great Fire of 1922 consumed 650 square miles in eighteen townships in Northern Ontario. The towns of Haileybury, Charlton, North Cobalt, Thornloe, Heaslip and many other small settlements were completely destroyed. Englehart and New Liskeard were partially burnt but ultimately saved as the winds shifted direction at the last moment. Remarkably, only forty-three people lost their lives, but over 6,000 lost their homes and property damages were estimated in excess of $8 million dollars.

Just now hearing the horrific news from western Canada where Alberta declares state of emergency as firefighters struggle to save Fort McMurray.

Raging wildfires force more than 80,000 to flee the oilsands city of Fort McMurray. About 1,600 buildings, most of them homes, were hit by the fire. Feds pledge all possible assistance.Toronto Star, 4 May 2016

You can donate now to the Canadian Red Cross to help the families left homeless by this horrible fire. You can also text REDCROSS to 30333 to make a $5 donation. In memory of my grandparents (George and Annie Brown) mentioned in this article who were also helped by the Red Cross, I’ve just made a personal donation to help out all the people who have lost their home or who have fled the city to escape the fire, not knowing if their home will be consumed in this inferno. Praying that they are able to get the blaze under control and that everyone makes it out safely.