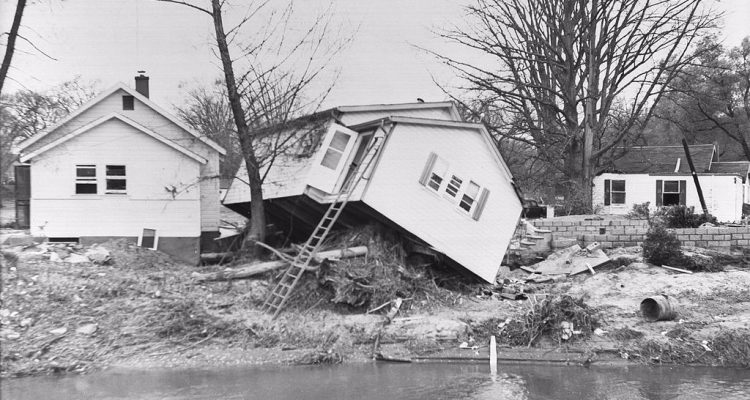 Protection of the Alleghenies

On Friday, 15 October, 1954, Torontonians were feeling the effects of Hurricane Hazel which had just hit land in the Carolinas as more than one inch of rain fell during the morning commute, snarling traffic and flooding roads.

The forecasters predicted that the hurricane to the south would bring a ‘rough storm‘ to Toronto as it blew itself out although they cautioned that a batch of train would hit the city throughout the afternoon and evening hours and that winds of 30 mph were possible.

Still, people went about their normal routines, never expecting what would come. The rain, as expected, resumed in the afternoon, resulting in more traffic snarls in the evening rush. The underpasses and low lying areas began to pool with water but by 7 o’clock that evening, the traffic had cleared and everyone thought the worst was over.

By 9 o’clock that evening, as the heavy rains continued, Highway 11 became flooded in several places between Toronto and Bradford. It would ultimately be blocked by a 20 foot wide washout just north of Thornhill.

Where Highway 400 crossed the Holland Marsh, the waters began to flood across the roadway, submerging it and it was eventually blocked by a 40-foot canyon near the Bradford exit. Some 350 people were marooned at the gas station near the Cookstown exit at Highway 89 when another breach in the 400 highway appeared to the north.

At 9:30 pm, the Public Weather Office in Toronto issued a revised weather report, the forecasters still not alarmed by the approaching storm.

Hurricane Hazel, which moved in on the North Carolina coast this morning, continued to move northward and to accelerate during the day, and by 9 pm was centred between Buffalo and Rochester. The intensity of this storm has decreased to the point where it should no longer be classed as a hurricane. This weakened storm will continue northward, passing just east of Toronto before midnight. The main rainfall associates with it should end shortly thereafter with occasional light rain occurring throughout the night. Winds will increase slightly to 45 to 50 mph until midnight, then slowly decrease through the remainder of the night.Globe and Mail, 16 October 1954

In Longbranch, near the Etobicoke creek, the residents were well used to flooding and they began evacuating their homes at about 10:30 that night, just in case. A nearby trailer park followed suit at 11 o’clock.

The bridge at Woodbridge held the river back for a time but at 11 o’clock, the storm claimed its first victims as a car was washed off the bridge and hurtled into the Humber River. All of the occupants were lost. The people in the car were later identified as the Reid family of Woodbridge.

It was just before one o’clock that morning when the police got the first call for help from the community of Weston as the waters began to rise all along the Humber River.

After a night of terror for many people of Toronto and surrounding communities, the Saturday issues of the Toronto newspapers were filled with stories of the hurricane and resulting floods. The Toronto Star coverage alone took over the first page and ten more inside. Everyone wanted to know what had happened to their families, their neighbours and their friends but the reports were still coming in and coverage was spotty.

Early reports on Saturday estimated the death toll at 30 although the count would go higher. Reports from Woodbridge said that somewhere between 11 and 19 persons had died. Five Etobicoke firemen were presumed dead after their truck was swept into the Humber River. It was believed that 5 people had drowned in Weston and at least that many had drowned in the Holland Marsh.

By Monday, the true extent of the losses from the hurricane were clearer. The Toronto Star listed the tragic statistics:

There were  78 known dead with 15 others missing and presumed drowned. The damages from Hurricane Hazel were expected to be in the tens of millions once everything had been tallied.

The final official numbers were 81 people dead, 4000 people homeless and 300 million tons of water that fell during the storm.

Raymore Drive was a quiet street that ran along the west bank of the Humber River just opposite the Weston Arena. The residents there perhaps went to bed on the evening of Friday, 15 October with a slightly uneasy feeling over the storm, but secure in the knowledge that the river had never risen to threaten their homes before. But Hurricane Hazel was no ordinary storm. Over the course of the evening of Friday the river flooded the lower portion of Raymore Drive and at about eleven o’clock the power failed, plunging the neighbourhood into darkness.

By midnight, the river was high, but most of the residents were not yet alarmed. When the water level reached main level of the lowest most house, the people there transferred their prized belongings and furniture to the house next door.

Herbert Andrus of Gilhaven Avenue, just to the north of Raymore Drive, was watching television until the power went off and he went to bed. A little later, he looked out and saw the rising water and went to get his dog from the garage. As he made his way through the darkness, the water reached his ankles. By the return trip, it was up to his knees and he sent his wife Lucy and their son Tommy up to the nearby Army and Navy club. Had his neighbours followed his lead, the tragedy that was about to unfold could have been largely avoided.

Suddenly, sometime after midnight, the flood waters came surging down the river and the pedestrian Bailey bridge 1The Bailey bridge is a type of portable, pre-fabricated, truss bridge. It was developed by the British during World War II for military use, recently installed just south of the Weston Fairgrounds between the Raymore Drive neighbourhood and the other side of the river was dislodged. It acted as a battering ram, striking at the neighbourhood homes in the 15 and 20 foot waves. Homes were knocked from their foundations and were washed away, many of their owners still inside.

Gerald Elliott, aged 33, telephone lineman was rescued after spending four hours clinging to a willow tree near the Old Mill by Max Hurley, Toronto lifesaver. He was taken to St. Joseph’s Hospital suffering from hypothermia. Elliott had been trapped in his car on the bridge on Old Mill road. When firemen attempted to rescue him using a hose, the hose had broken and Elliot entered the water. His car was swept off the bridge immediately afterwards. After many previous attempts to rescue Elliott had failed, Max Hurley managed to reach him in his lifeboat, plucking him to safety just as his strength was about to give way.

Three motorists who had their cars washed of Pottery Road late Friday night were rescued from the river.

Alex Nicholson, 41 of Pottery Road, was originally perch atop his car but just as he was about to be rescued, his car flipped and was carried downstream. Nicholson went into the water and managed to grab hold of a bush a considerable way downstream. He was finally pulled to safety when a fire department extension ladder was raised and the police were able to get a line to him.

Jack Bates 27 of Lang Avenue and Edrick Moir, 30, of Manning Avenue were also rescued from the same spot. Moir spend over eight hours perch in an elm tree until the rescuers could reach him with a huge road grader.

The low lying area of the Holland Marsh was devastated by the storm. The waters that flooded Highway 400 and Highway 11 surged into the Holland Marsh submerging the entire 7000 acre area and by Saturday morning, there were hundreds of people huddled shivering on the roofs of the houses. Those residents in the north-east sector of the marsh were able to escape to Bradford but the south-west end was particularly hard hit in the area bounded by the Holland River and the Schomberg Creek. Rescue efforts  were slowed as volunteers waited for boats and all roads into the marsh were blocked with water.

The harvest had been complete when the fields were flooded but much of the produce was still in bags or crates waiting to be shipped and were now lying under the flood waters and rotting. Over 500,000 bags of onions and nearly as many crates of celery and other vegetables broke loose in the flood waters, battering those trying to escape and dashing apart the houses, breaking them from their foundations.

In all, over 500 homes were flooded as residents fled to nearby Bradford or Schomberg after a night of terror, fearing that they had lost everything. A massive effort called the ‘Mop-up’ got underway almost immediately to begin pumping the water from the area and on the Sunday following the storm, some 80,000 gallons a minute were cleared from the eastern section and pumps from all over Ontario were being rushed to the region to aid the effort. By the time all was said and done, about six to eight billion gallons of water would be pumped from the marsh in the eastern section over the course of 24 days. The 2000 acre area of the Marsh to the West of Highway 400 was also cleared, allowing farmers to begin planting their 1955 crops.

More reading
The archives of the Toronto Star and The Globe and Mail are available to view free in many Ontario libraries and contain many pictures and stories from the days following the storm. There is also a website dedicated to Hurricane Hazel that was produced by the Toronto and Region Conservation and ThinData, with funding from Conservation Ontario on the sixtieth anniversary of the storm.
Hurricane Hazel
Environment and Climate Change Canada
CBC Digital Archives