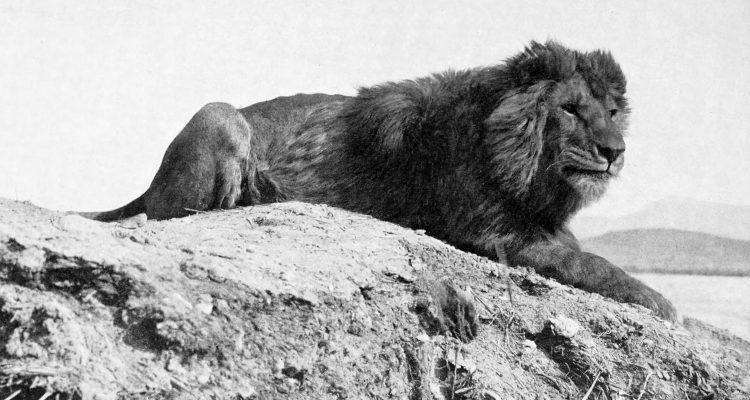 On Wednesday, 3 January 1872, Thomas Macarte gave his last performance as Massarti the Lion Tamer in front of a horrified crowd of about 500 people at the Manders’s Menagerie in the Bolton marketplace in Lancashire.

The menagerie had been in town since Friday, December 29 and Thomas Macarte had been one of the star attractions since he had joined Mander’s after the death of the famous lion tamer Maccomo the previous January. Macarte, who was never at ease when performing, had left home at about two o’clock in the afternoon that day and failed to return for his tea, according to his wife who testified at the inquest. One of the lions with whom the 33-year-old Macarte would be performing had bitten him on Monday that week and he had commented to his wife that he was afraid of it. Although Macarte had been sober when he left her, it was thought that he had gone for a few drinks prior to the evening’s performance, in order to shore up his courage. So it was that when he arrived dressed in his French uniform for the performance that evening, he was the worse for drink.

It was the end of the evening, at about 10:30 pm when the unthinkable happened. Macarte was in the den with five male lions, engaged in an act they called Lion Hunting. He was driving the animals from one end of the age to the other when one of them ran against his legs, throwing him down. He quickly regained his feet, however and drove the animals into the corner of the den. He walked to the centre of the cage and stamped his feet to signal the lions to run past him again. As he was doing so, the African lion creeped stealthily towards him and struck him with a paw, knocking him to his knees. As he turned to the lion and struck it with a sword, another lion placed its paw on his leg, holding him down, tearing his costume from his chest. The other four of the lions then attacked. Macarte kept his cool, striking at them with his sword to no avail. The lions knocked him to the other end of the caravan and he fired his revolver three times. The revolver, loaded with blanks, made an enormous noise.

The spectators, suddenly realising that this was not part of the act, began to panic. At the sight of Macarte lying in obvious agony, the women in the audience began to scream.

Macarte struggled to regain his feet but the lions kept on him. As he lay on his side, supported by the stump of his left arm, he lunged at the lions with the sword. The Asiatic lion with the black mane seized his arm, tearing the flesh and crunching through the bone, forcing him to drop the sword. Macarte’s performance with the lions had been unplanned, the last performance of the evening before the Menagerie left town. The hot irons, normally heated and kept on hand during a show, were not prepared, and it took some time to heat them. In the meantime, the men came forward with pitchforks and other weapons to try to beat the lions off but as one lion relinquished its hold, another would move in to take its place. By now, the lions had attacked Macarte’s legs and were tearing flesh from his thighs as a pool of blood formed beneath him. One man managed to bury a pitchfork in the neck of one lion and it finally fell away. A blow caught another lion on his massive shoulder and the weapon glanced off, doing little damage.

One of the men thrust a broom handle into the cage as another wedged a ladder between the bars but the black maned lion tore the head from the broom and easily vaulted over the ladder and began dragging Macarte across the cage. Finally the irons were hot, and the men entered the cage, brandishing the red-hot pokers and discharging blank shots and after considerable effort, managed to drive four of the lions back behind the partition. The fifth lion, the African one who had first attacked Macarte, was still on him and they concentrated their efforts on forcing him back. It wasn’t until they thrust the hot irons into his face burning his nose, that the lion finally relented and let go of Macarte, running behind the partition.

Before the partition could be slammed closed however, one of the lions ran out and grabbed Macarte by the foot, dragging him behind the screen and the other four lions fell on him again. Finally, using the hot pokers, the other performers were able to rescue Macarte, but by then it was already too late.

The back of his scalp had been torn away, large bites had been ripped from his thighs and his right arm was fractured in two places. Although he spoke briefly as they carried him to the infirmary, it was only to say that he ‘was done for’. He died on arrival at the infirmary.

Thomas Macarte was born in about 1839 in Cork, Ireland and was married, but had no children. He had been employed in and around menageries for most of his life and before coming to Manders’ Menagerie, he had performed in a similar capacity with the circus of Messrs. Bell and Myers. Despite this lifetime of familiarity, Macarte was known for turning his back on the lions, although he had been frequently warned how dangerous it could be and it was believed that doing so contributed to his final accident and his horrible demise. As a lion tamer, Macarte was well paid, easily earning £4 a week, a sum four times greater than the average income at the time.

While 22-year-old Thomas Macarte was engaged as a lion keeper in Liverpool, he lost one of his forearms when two lions attacked him and mauled him so terribly that amputation was the only alternative. The accident happened on Thursday, 20 November 1862 at the American Hippodrome Circus in Crosshall-street just off Dale-street. As Macarte, the assistant to Mr. Alfred Moffat, was walking past the lion cage, he was seized by one of the lionesses and his arm was severely lacerated. Mr. Batty, one of the other performers, heard Macarte’s screams and ran to his rescue, tearing him from the lioness’ grasp.

Thomas Macarte, alias Massarti was laid to rest in the Roman Catholic section of Bolton Cemetery on Saturday, January 6. In the July following, a monument dedicated to his memory was erected over his grave by Mrs. Manders, the owner of the Manders’ Menagerie. The monument in white marble and in the form of a cross, was nearly three feet high and rested on two larger blocks of granite.