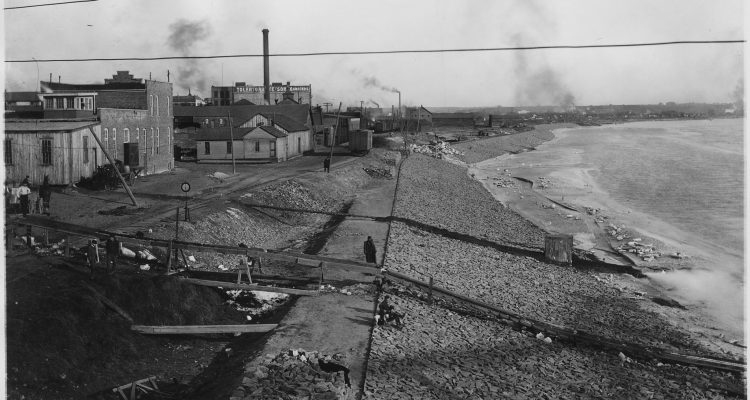 On the afternoon of Sunday, November 24, 1895, in a jealous rage, William Royce shot his former lover, Nellie Patton, killing her with two shots.

Nellie, a divorcee who had recently left Royce for a bartender by the name of Walsh, was living in a house of assignation in Sioux City run by Billy Nead. Royce, a baker by trade, was despondent over the breakup of their affair and had been drinking that afternoon. He borrowed a revolver, went to her place of residence and shot her twice. She died within the hour. It is thought that Royce had intended to take his own life but instead he fled the scene but he later gave himself up to the police and confessed the whole story.

When Royce was arraigned in Police Court in Sioux City on Tuesday, November 26, he pleaded not guilty, despite his confession on Sunday. His friends had retained Attorney George Argo who entered a plea of not guilty by insanity, claiming that Royce had become insane from jealousy and the use of cigarettes. Bail was fixed at $20,000 and the accused was deprived of his eye-glasses for fear that he might open a vein with a broken fragment.

When rumours surfaced that there was a plot to lynch Royce and Billy Nead, the proprietor of the establishment where Patton had lived, the Sheriff and local police stepped up security, prepared to meet any such efforts with resistance. 1St. Paul daily globe., November 28, 1895

When the case finally came to trial on April 1 in 1896, Royce changed his plea from not guilty to guilty, not wanting his mother and sister to bear the shame of hearing of his disreputable life in open court. 2Omaha daily bee., April 10, 1896 His physician, Doctor J G Ross, testified that Royce was a dangerous character who kept thousands of newspaper clippings in his rooms about murders and murder trials. The doctor told the court that Royce would pour over his collection of articles for hours, sometimes sending to the local papers for more details.

On August 7, William Paschel Royce, aged 24, baker of Woodbury County, was sentenced to 17-1/2 years in the penitentiary for second degree murder. Judge Scott M Ladd gave the sentence, saying that for every year that Royce had lived in liberty, he should spend one in prison. 3The Washington times., August 07, 1906, Last Edition, Page 6

In prison, away from the bad influences that had led him astray, Royce was placed in the machine shop where he applied himself to learning the trade of engineer. He was a model prisoner.

On August 16, 1900, he was released from prison, having served only four years of his sentence. His release was granted by Judge Ladd who had originally convicted him, the judge now on the Supreme Bench. 4The Washington times., August 07, 1906, Last Edition, Page 6

Governor Cummins has granted the application to grant an absolute pardon for William P Royce of Sioux City who served four years of a sentence of seventeen years in the penitentiary at Anamosa. Royce was convicted in 1896 of murder in the second degree, he having killed Nellie Patton. He was paroled in 1900.Cedar Rapids Evening Gazette, Friday January 22, 1904

After being pardoned, Royce took a job as foreman at the Sioux City Gas and Electric company. Having established himself and saved some money, he felt driven to seek out Nellie Patton’s daughter who had been only eight or nine years old at the time of her mother’s death. He wanted to apologize to her for robbing her of a mother at such a tender age.

After some searching, he found young Loretta at the home of her adopted family, the Henrickson farm. The kind hearted Henry Henrickson allowed Royce to call on Loretta. Royce visited the farm often after that and an unlikely romantic relationship developed between them, despite the fact that Royce had murdered Loretta’s mother in cold blood and that Loretta was 18-years-old to William’s age of 32.

Sarah Rush was the daughter of Henson and Harriett Rush, born about 1867 in Van Meter, Dallas County, Iowa.

Sarah married Olivar Patton, son of Joel and Sarah Patton, on Christmas day in 1887 in Van Meter. Their daughter, Loretta Orphus Patten, was born shortly after.

The marriage did not last however, and Olivar and Sarah divorced, going their separate ways. After the breakup, Olivar Patton reportedly moved to Kingsley and Sarah, or Nellie as she was called, moved to Sioux City, perhaps in search of excitement. When the family broke up, their daughter, Loretta, was adopted by farmer Henry Henrickson.

It was in Sioux City where the 28-year-old divorcee Nellie Patton met 23-year-old William Royce and the two began a relationship, setting the stage for Nellie’s tragic death.

In 1920, the family was living in the sixth precinct in the same house on 13th street. William was working at the Erecting Company as an Engineer. William’s mother, Emma Eliza, now 89-years-old was living with them. 8Year: 1920; Census Place: Sioux City Precinct 6, Woodbury, Iowa; Roll: T625_520; Page: 6B; Enumeration District: 211

Not surprisingly, after the circumstances of their marriage, William and Loretta divorced sometime between 1920 and 1930 and from 1930 through to 1940, the two children remained with William in the house on 13th street.

William Paschal Royce died on 17 October 1940 and was buried in Floyd Cemetery in Sioux City. Loretta Royce married Charles William Hicks and had a child Jean Rita Hicks on 21 July 1923 in Sioux City. What happened to Loretta after that is unknown.