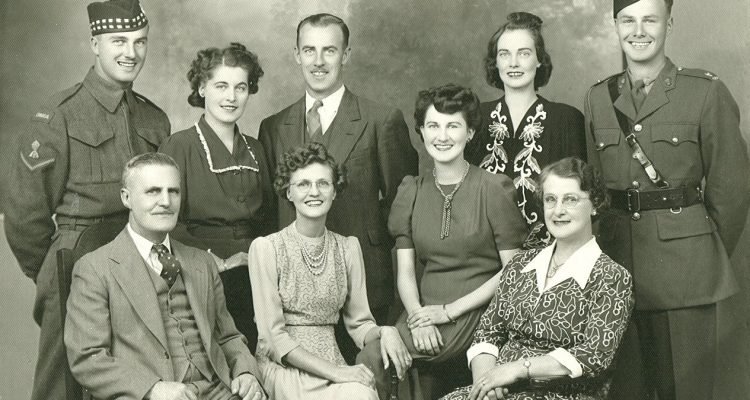 My mother, Jean Irene Bond, nee Brown, passed away on 26 August 2018, six days after her 95th birthday. Over the years, Mom told me many stories about her childhood years in New Liskeard, Ontario. She lived there from not long after she was born until she was about 17-years-old and moved to Toronto during the war years. These are my Mother’s Memories as they were told to me.

Born on 20 August 1923 in Englehart, County of Temiskaming, Ontario, Canada, Jean Irene Brown was the seventh child of George and Annie Elizabeth Brown. She was the baby, the youngest of the family, or as she used to say, the dregs of the pot. She always told me that she was named after her nurse whose name was Jean Irene.

When Jean was born, the family was living in what was left of Charlton after the Great Fire of 1922 had completely destroyed the Northern Ontario town on 4 October 1922. The town was located on the banks of the Englehart River within the Township of Dack and prior to the fire, it had been a bustling settlement.

Tragically, the Great Fire in October 1922 was not the Brown family’s first experience with losing everything to burning flames.

They had moved to Charlton from their homestead at Leeville after their four room wood house was destroyed by fire on 28 July 1922. George had been working as a fire ranger to supplement his farming income and the whole family had been camping with him in the Hills Lake district at the time of the July homestead fire. All of their furniture and clothing were lost in the homestead fire and they were left with only their camping clothes and gear.

Fire Destroys All
Fire destroyed the home with contents of Mr. and Mrs. Geo. Brown, at Leeville,on the Elk Lake branch, Friday morning, July 28th. Mrs. Brown and family, six young children, were with Mr. Brown, who was fire ranging at Hillslake district. They had been away eleven days and had with them only their camping-clothes and outfit. All their furniture and effects were destroyed.

Having been burned out twice within a few months, the Brown family found a home in the town of New Liskeard, now Temiskaming Shores, not long after my mother’s birth.

When Jean was born, there was some concern that she had the same digestive problems that had plagued her sister Anne as a baby. At the age of two, she was taken to Sick Children’s Hospital in Toronto to be examined.

A special diet was recommended and she returned home to New Liskeard.

My mother didn’t remember why she had a special diet or what was thought to be wrong with her digestion, but in later years she was diagnosed as being lactose intolerant so that might have been the problem. It was not until the 1960s that it became known that a child could be intolerant to lactose.

My mother talked of the house she grew up in often.

“My father rebuilt the house from the inside out,” she told me. “When we first moved in, it was infested with bed bugs. Dad put wood shavings and kerosene between the outer and inner walls to kill them. It’s a wonder the house didn’t burn down.”

The seven children shared two bedrooms, the three boys in one and the four girls in the other. The girls room had two double beds.

“No one wanted to share a bed with Anne,” she told me. “Anne was a restless sleeper and would fling her arms and legs about all night long.”

” I shared with my sister Lily and Jessie slept with Anne. When Jessie got married and moved out, Anne got the bed to herself.”

My mother remembers bathing in a large galvanized tub in the kitchen, with a few clothes horses strategically placed for privacy.

“We had an outdoor biffy when I was very young,” she recalled. “There was no indoor plumbing in those days. We girls used a chamber pot in the night because the outhouse was out by the barn. The boys would pee out the window when they could get away with it so they didn’t have to empty their chamber pot.”

It wasn’t until the outhouse caught fire and burned down, that her father installed a small bathroom off the kitchen. Her brother George came in to tell the news.

“The shit house burned down,” he sang. “Ain’t got no shit house no more.”

The bathroom took a few weeks to build, and in the meantime, the family used the neighbour’s bathroom.

“The winters in New Liskeard were nothing like they are here,” my mother told me. “The air was so cold it would freeze your nose but it was crisp and clean, not like the damp air here in the south. The snow was different too. We got a lot more of it in the north but it was drier and whiter. There was often a hard crust and we could walk on top of the drifts. We’d carve out blocks of it and build snow forts.”

In the winter, the Wabi river would freeze solid. Rather than having to walk down the road to the bridge, the children could take the shortcut to school, cutting across the ice.

The Brown family home was perched on the edge of a ravine. It was, in fact, moved multiple times on the property over the years as the ground near the ravine eroded away. During the winter months, with a thick blanket of snow on the ground, the ravine became a favourite place for sledding. Not having an actual sled, the Brown children improvised and used an old piece of tin. On one occasion my mother suffered a deep cut from the edge of the tin sheet and had to have stitches. The scar on her upper thigh was about three inches long and a half inch wide so it must have been quite a cut.

The girls in the family would often go skating in the winter on the nearby Wabi River. My mother remembered strapping ice skates on over her boots.

“You could skate for miles on that river,” Jean remembered. “The air was so crisp and cold. There’s nothing like crisp Northern Ontario air.”

One winter, a neighbour told Annie that her George was up the River playing hooky. Between Annie’s Yorkshire accent and a dusting of Baptist innocence, Annie had no idea her son was skipping school. She just thought the neighbour meant that George was playing hockey up the river.

One winter, the family awoke on a Sunday morning to a significant snow fall.

“No church today,” Annie told the children, seeing the huge drifts that rose up the walls of the house almost to the roof.

Jean’s sister Anne was deeply disappointed. She wanted desperately to go to church that morning.

While the rest of the family lingered in the warm kitchen over breakfast, she went upstairs to the girl’s bedroom. After dressing for church, she opened the window and slid down the drift of snow to the ground below.

There was a hard crust on top of the snow and by stepping carefully, she was able to walk on top of the drifts all the way to church. The family had no idea she had gone until she returned home a few hours later.

“I remember the year I got my Shirley Temple doll for Christmas. We seldom got toys but that year was an exception.”

“Once my sister Lil started working, I could always count on her to give me a few pennies to do my Christmas shopping.”

“I would save up and then go and buy a package of gum and then give one piece to each of my brothers and sisters for Christmas.”

Summer, after school was over, was a favourite time for all the Brown children, but especially Jean.

She didn’t like school very much and dropped out to go to work after completing public school.

“The worst teacher I ever had was Teeny Weeny Fraser with the buckskin razer,” she told me. “That woman was a witch but I really mean bitch. She sure knew how to swing that strap.”

Jean loved going to the movies with her friends. Adult tickets at the Empire were 50 cents plus a five cent tax while children were 25 cents and no tax. The Saturday matinee (afternoon show) was ten cents less.

“One year, my sister Lil worked at the Empire movie theatre in town. We could always count on her letting us sneak in without paying.”

The films Jean remembered were Gone With the Wind, The Wizard of Oz, and Wuthering Heights. Film stars she remembered were Clark Gable, Vivien Leigh, Gary Cooper, Cary Grant and Bette Davis.

“We swam in the Wabi River every summer,” Jean remembered. “It didn’t have a bottom. It’s a wonder none of us ever drowned in that river.”

“We used to love to go to the drug store for a Cherry Coke,” Jean remembered. “It was so good. Icy cold on a summer day.”

“When I was about ten years old, I was in the car with my girl friend and her father. Hardly anyone had a car in those days, but her father was a doctor so he had one. We were driving up a hill and another car came up over the top and ran into us head on. My nose was broken and it was never set properly.”

For the next 20 years Jean occasionally had small pieces of bone from her broken nose that would work their way to the surface. In her late forties, she had her nose re-broken and straightened by a specialist after repeated sinus infections.

“My mother was a great cook,” Jean remembered. “Nothing fancy, just good old fashion home cooked meals. In the summer, she would can vegetables and fruits and that would keep us going all winter long.

“We used to chase the farm truck carrying the peas down the highway, and grab handfuls of peas. I’m not sure if it was because they were stolen, or just because they were really fresh, but they sure tasted good.”

With seven children to feed, the Brown family went through a lot of bread. Annie baked it regularly.

“My mother made the best bread ever,” Jean remembered. “There was nothing like the smell of bread baking in the morning. We would fight over the crust because we all liked that part best. Sometimes my mother would come in and find that every bit of the crust of a loaf had been cut off and only the inside of the bread loaf was left.”

They would eat the bread, still warm from the oven, slathered in butter.

George BROWN and Annie Elizabeth SAVAGE married 1 January 1909 in Sheffield, Yorkshire and had the following children: