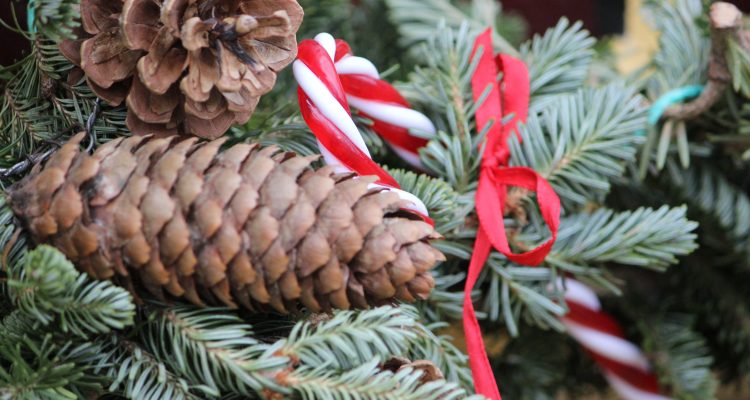 At the beginning of the 1800s, Christmas was hardly celebrated in Britain, with many business remaining open that day. Newspapers were published. People went about their normal business. But by the middle of the century, things began to change. Some credit the resurgence of Christmas spirit to Queen Victoria and Prince Albert who celebrated the holiday as a special family time with Christmas trees, exchange of gifts and a sumptuous feast.

Charles Dickens wrote A Christmas Carol in 1843, just as the British public were rediscovering the traditions of the past and beginning new ones, adopting the Royal Christmas trees and sending Christmas cards to friends and loved ones. A month before A Christmas Carol was to be published, advertisements began to appear in the newspaper, intriguing the public.

After the book’s release, praise for Dickens’ work appeared in Newspapers all over the United Kingdom.

It impossible read this little volume through, however hastily, without perceiving that its composition was prompted by a spirit wide and wholesome philanthropy—a spirit which selfishness in enjoyment is an inconceivable idea—a spirit that knows where happiness can exist, and ought to exist, and will not be happy itself till it has done something towards promoting its growth there.Cork Examiner - Friday 22 December 1843
This is one of the smartest little books for a Christmas present that we have ever seen.Leeds Intelligencer - Saturday 23 December 1843
The Christmas Carol of elder days, whose lusty voice was ever season- ably beard, was a song of joy to enliven and exalt the time. Warton accuses the Puritans of the change, and was probably right. Mr Dickens accuses nobody. but in a voice of cheery faith and hope, which will ring from one end of the Island to the other, calls to the best of Christmas Past to come back into the arms of Christmas Present, and with a large offspring of happy Christmasses comfort and bless the Future.The Examiner - Saturday 23 December 1843

The first Christmas cards were commissioned by Sir Henry Cole in London on 1 May 1843 and two batches of 2050 cards were produced. With the establishment of the penny post a few years later, sending Christmas cards to family and friends became a very profitable business. The earliest designs sported flowers and fairies or images of children and animals with elaborate designs.

CHRISTMAS CARDS AND BOOKS. We have often adverted to the remarkable development of the practice of sending Christmas cards. For that matter, these tokens of goodwill are now-a-days sent out more than once a year. The advent of the new year is signalized by the circulation cards, and Easter there is a further issue of them. But the great distribution takes place at Christmas. Every year there seems to be more general disposition to remember one’s friends in this way. In short, the manufacture of Christmas cards has become very considerable branch of industry, and what is of more importance, the increased demand tends to make these seasonable offerings increasingly beautiful. A box of Christmas books, booklets, and cards which we have received from the well-known firm of Messrs. Hildesheimer and Faulkner, of 41, Jewin street, London, E.C., contains some of the most elegant and tasteful samples of the pictorial art we ever remember to have seen produced in honour of Father Christmas.Derby Daily Telegraph - Wednesday 30 November 1887

Father Christmas, the traditional British name for Santa Claus, was traditionally associated with feasting and drinking, rather than being known for bringing gifts to children.

He was known to wear a long green hooded cloak and was sometimes draped with a wreath of holly, ivy or mistletoe.

Towards the end of the 1870’s, Father Christmas took on a new role as the bringer of gifts of children, imitating his relation, St. Nicholas. With the industrial revolution, toys could be manufactured in more economical way, but these were still only affordable to the middle classes.

The poor child’s stocking, in contrast, might simply contain an apple, an orange and a few nuts.

CHRISTMAS IN COVENTRY. In compliance with his annual custom the good genius of the winter season Old Father Christmas looked in upon us on the 25th of this month ; and, finding things much usual, changed them, as he always can, by the magic of his touch – made smiles play upon faces generally wan and haggard, and brought plenty many homes where plenty is rarely seen. Though sent to Coventry he maintained all his jollity ; and, if one may judge by what he has done, considered the City erst patronized Godiva, not such a bad place after all. A week before his arrival we were all ready to picture him coining frost-crowned, snow-clad, and attended by the cold, frank North wind ; but the frost and snow that heralded his advent fled as he approached more nearly thawed by his geniality, perhaps, who knows and when he looked in upon it was with damp locks and dripping garments, on such day as young ducks are said to take delight in. Yet, though he had banished the cold and brought the damp, he had lost none of his characteristic warmth of heart, and Father Christmas was welcomed at Coventry in December, 1859, as we trust he ever will be welcomed throughout all England, to the end of time. Coventry Herald - Friday 30 December 1859

In 1848, the Illustrated London News published a drawing of Queen Victoria and Prince Albert celebrating Christmas around a decorated tree, a tradition brought to England by Prince Albert from Germany. Because of the strong influence that the Royal Family had on the British public, it wasn’t long before almost every British home had a Christmas tree.

Typically, the early Christmas trees were decorated with candles, sweets, fruit, homemade decorations and small gifts for the children. Strings of popcorn festooned the tree, and cups of wassail 1hot mulled cider were passed around.

The Christmas tree was traditionally put up on Christmas Eve and taken down on twelfth night, January 5th.

THE CHRISTMAS TREE AT WINDSOR CASTLE. A Christmas tree is annually prepared, her Majesty’s command, for the royal children. The tree employed for this festive purpose is a young fir, about eight feet high, and has six tiers of branches. On each tier or branch are arranged dozen wax tapers. Pendant from the branches are elegant trays, baskets, bonbonnie’es and other receptacles for sweetmeats, of the most varied and expensive kind, and of all forms, colours, and degrees of beauty. Fancy cakes, gilt gingerbread, and eggs filled with sweetmeats, are also suspended try variously, coloured ribbons from the branches. The tree, which stands upon table covered with white damask, is supported at the root by piles of sweets a larger kind, and by toys and dolls of all descriptions, suited to the youthful fancy, and to the several ages of the scions of royalty for whose gratifications they are displayed. The name of each recipient is affixed to the doll, bonbon, other present intended for it, so that no difference of opinion in the choice of dainties may arise to disturb the equanimity the illustrious juveniles. On the summit of the tree stands the small figure of an angel, with outstretched wings, holding in each hand wreath. Similar trees are arranged in various apartments of the Castle for the Duchess of Kent and the royal household. These trees are objects of much interest to all visitors at the Castle from Christmas Eve, when they are first set up, until Twelfth Night, when they are finally removed. They are not accessible to the curiosity of the public; but her Majesty’s visitors accompany the Queen from room to room to inspect them when they are illuminated. Majesty’s tree is furnished by his Royal Highness Prince Albert, whilst that of the Prince is furnished according to the taste of her Majesty. The other trees are jointly provided by her Majesty and the Prince, who plan and arrange the gifts of the table.Stonehaven Journal - Tuesday 09 January 1849

Holly and ivy as Christmas decorations date back at least to the fifteenth and sixteenth centuries. Older still, Mistletoe harkens back to the ancient Druids and is supposed to have mystical powers to bring good fortune and ward off evil spirits.

On the USE EVERGREENS & MISTLETOE CHRISTMAS. Christmas the joyous period of the year! Now with bright holly all the temples strew With laurel green and sacred mistletoe. The custom of decking our churches and habitations with evergreens, has existed from the very establishment of christianity, and was unquestionably derived from like practice our Pagan ancestors. Trimming of the temples, says Polvdore Virgil, with haigyngs, flowers, and garlandes, was taken of the heathen people, which decked their idols and houses with such array. The Celts and Goths were alike distinguished for the respectful veneration which they entertained for the mistletoe, and for the solemn rites with which they gathered it about that period of the year when the sun approached the winter solstice. The Druids were particularly famed for the distinguished regard they paid to the mistletoe of the oak: they attributed it numerous virtues. At certain seasons of the year, especially at yule-tide or Christmas, they were accustomed to gather it with great solemnity, and the sacrifice of two milk-white bullocks, that had never been yoked (not till then) had their horns bound up. It was cut from the tree with a golden bill, or pruning knife, by a priest habited in white vestment, and was received in a white woollen cloth; many orations were then made over it, and the ceremony being deemed complete, the ‘sacred’ plant was preserved for use with religious care. The Druids had an extraordinary veneration for number three; and on this principle says Vallancev. in his Grammar of the Irish language, it was that mistletoe was held sacred to them since only its berries, but its leaves also, grew in clusters of three united on one stock. The inhabitants of Elgin, and the shire of Moray, in Scotland, according to the account written by the Rev. Mr. Shaw, are accustomed, at the full moon in March, to cut withes of the mistletoe. or ivy, and make circles of them, to keep them all the year, pretending therewith to cure hectics and other troubles. As the ivy is dedicated Bacchus, so should the mistletoe be to love; not however to the chaste Eros, but to the sportive Cupid. The sacred regard given toil in Pagan and Druidical rites has long been terminated but it is still beheld with emotions pleasurable interest when hung up in our kitchens at Christmas: it gives licence to seize the softness from the ruby lips of whatever female can be enticed or caught beneath. So custom authorizes; and it enjoys also, that one of berries of the mistletoe be plucked off after every salute. Though coy in appearance, the chariest maid at this season of festivity, is seldom loth to submit to the established usage, especially when the swain who tempts her is one whom she approves. Coventry Herald - Friday 30 December 1859

The yule log is a specially selected log that is burnt on the hearth around Christmas. It is said that it is unlucky if it should have to be relighted again once it has been started and that it should burn completely down, although a piece of it might be saved to light the yule log the following year.

The wassail-bowl was regularly carried from door to door in Cornwall in the eighteenth century and even now a measure of flip, ale, porter and sugar, or some beverage, is handed round while the yule-log is burning.