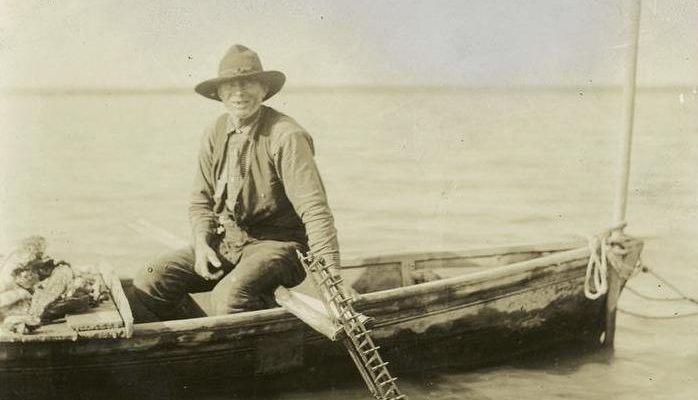 By the mid 1860’s, the ever-growing oyster market in New York City was assessed at close to five million dollars annually and in hundreds of shallow bays, inlets and coves along the shores of Staten Island, Long Island and New Jersey, oysters were harvested to supply the ever-growing demands.

Along the Jersey shore where the rivers met the saltwater, were the large natural oyster beds. In spring, the oysters spawned, spreading a white gelatinous substance from which grew small oysters. Each oyster could produce in excess of 1,000,000 eggs and although about half of these would be consumed by fish or sink into the muddy bottom, the remaining tiny oysters were taken up and laid in shoals of saltwater for a period of two years until they were large enough to be harvested. Thousands of bushels of oysters were transplanted in this way in both the spring and fall. By 1860, those in the industry recognized that unless something was done to protect the natural beds that they would eventually be destroyed, but with the increasing demand, nothing was done.

It was estimated that there were about 2,500 vessels and 8,000 men and boys, not including the smaller boats without sails, that were engaged in gathering and transporting oysters to New York and another 18,000 persons opening, preparing, sorting and packing the bivalves and half as many more involved in serving them in restaurants and bars. Retail prices in New York were about 35 cents each with the coveted Saddle Rock oyster fetching as much as 50 cents each.

Oysters were traditionally harvested by oystermen with tongs between seven and twenty-four feet in length, resembling two garden rakes with very long handles. Tongmen, in skiffs or canoes, would rake up oysters from the rivers or shallows during oyster season, traditionally confined to the eight months with the letter ‘R’ in them, between September and April.

In the state of New Jersey, the oyster season was not just tradition, but the law:

Be it enacted by the Council and General Assembly of this state, and it is hereby enacted by the authority of the same, That from and after the first day of May, until the first day of September, yearly and every year, no person under pretence of taking clams or shell-fish, or under any other pretence whatsoever, shall rake on any oyster bed in this state, or gather any oysters or shells on any banks or beds within the same…

On the morning of Monday, 27 August 1866, there was a distinct chill in the air in Elizabeth, New Jersey. It had been a cold and wet summer and local farmers feared that the harvest would be a full two weeks later than usual. Although oyster season would not officially begin until the following Saturday, several oystermen of Elizabeth decided to venture out with their tongs to get an early start on the harvest. By mid morning, six skiffs were floating about two miles from Elizabethport in the waters of Newark Bay, at a place known as Long Point.

In one of the boats was well-known oysterman Asa H. Dixon. He was thirty-three years old and a tall man, about five feet, ten inches and a veteran of the Union Army. Asa Dixon lived in Elizabeth at the foot of Elizabeth Avenue near the Staten Island Sound with his twenty-nine year old wife Caroline and their six children. Ann, the oldest, was eight years old and the boys, John W. and Asa, were six and four years old respectively. The twins, Phebe and Charles were two and a half years old and the youngest was baby Caroline who had been born the previous March.

The Dixon family had worked on the water for generations as seamen, watermen and most of the current generation were oystermen. Asa’s father John at aged fifty-three was a boatman, living further up Elizabeth Avenue at number 43. His brother John and his cousin Edward were oystermen like Asa and also resided on Elizabeth Avenue. John and Edward, along with a neighbour, Francis Hoplock, were with Asa Dixon on the water that day.

As the oystermen worked their tongs, Asa Dixon kept a sharp watch for the law, not wanting to be caught raking oysters out of season. When he saw two boats approaching from Bergen Point headed towards the Central Railroad bridge, he immediately pulled in his anchor and he, his brother, his cousin and Hoplock headed for a nearby creek. Behind them, the men in the remaining three boats were quickly arrested.

Heading about 200 yards up the creek, the Dixon group reached a spot that was about 25 feet wide. Coming upon a log, they rowed up along side. Asa Dixon’s boat was against the bank and heaped with illegal oysters. Hoplock’s boat was next to it and beside him was the boat belonging to Asa’s cousin, Edward Dixon. To the far side was Asa’s brother John’s boat. Believing that they had successfully avoided capture, Asa opened his dinner and began eating but as they floated against the log, a boat belonging to the law came up the creek with four men in it. In the boat were John W. Simonson, Special Deputy Sheriff of Hudson County, John H Meserole, of Greenville, Hudson County, Richard Van Pelt and James H. Miles in the bow.

As the Sheriff’s boat reached the Dixon group, they pulled up along side. Meserole held Asa Dixon’s boat steady with an oar, while James Miles held Hoplocks’ boat. Simonson stepped onto Dixon’s boat, saying:

Dixon told Simonson to get out of his skiff and, using both hands, he raised a shovel at Simonson, saying

You son of a b—h, get out of my boat or I’ll knock your brains out.

At the threat, Simonson stepped back into his own boat to join the other three men. He withdrew a navy revolver from under his coat on the left side and cocked it. Asa Dixon stood aft, on the stern sheets, the pistol leveled at his head. Someone shouted

Put up that revolver, you son of a b—h; we are not afraid of a revolver here.

Simonson’s foot slipped and he fell, his hand striking Dixon’s boat, his leg plunging into the water up to the knee.

A shot reverberated in the stillness of the creek.

As Simonson rose, he said to Miles,

My God, Jim, I believe I have shot that man.

After the shot, Dixon threw up his arms and fell over, his head and shoulders landing on the bank. A boy, John Smilet, who had been in Edward Dixon’s boat tried to reach Asa, but something or someone struck him on the back and frightened, he ran into the meadow. Hoplock jumped forward as the gun appeared, getting out of the boat and also escaping into the meadow. The other oystermen followed.

Five minutes later, the boat with Simonson in it had left the creek and returned to the river. Simonson went to Hudson County, and then started out for Elizabeth to turn himself in but was arrested while on his way by Assistant Chief of Police McGuire, near Saltersville.

The oystermen returned to the boats and found that Asa Dixon was dead. With nothing to be done, they retrieved Asa’s hat from the bank took his body back to Elizabeth.

About four or five hours after the shooting, physician Dr. Joseph S. Martin performed a post-mortem examination on the deceased, assisted by Dr. Petrie. He found two holes in Asa Dixon’s forehead. The lower and larger hole was nearly round, clearly a gunshot wound. The bullet had entered the skull directly over the eyebrow, passing through the brain and lodging under the skin above the ear. The second smaller hole was at an upward trajectory, ragged and only a scalp wound, probably caused by a splinter of bone. At the inquest held by Coroner Brunn, the evidence clearly showed that the shot that killed Dixon was fired by Simonson. A crowd of oystermen gathered as Simonson was indicted for the murder of Asa Dixon and they began to call for a lynching.

The trial took place on 23 October 1866 at a Special Term of the Union Country Court of Oyer and Terminer, at Elizabeth, Judge Haines presiding. Caroline Dixon, Asa’s widow, attended the trial as did other family and friends. The jury heard the conflicting evidence from both the prosecution and defense and were then instructed by the judge.

The judge said the fact that the prisoner was an officer gave him no right to come into Union County to make an arrest, and the deceased being a citizen of the State, the prisoner had no right to enter or capture his boat, and therefore the act could not be viewed as justifiable. They were to judge whether he held his pistol with prudence; whether it was necessary for him to have a pistol, and if not he must be held responsible; was he in the performance of a legal act, and if not, whether it was murder or homicide; whether the act was unintentional, or whether it was a willful act.

The jury retired at 2:25 pm. By 3:10, after less than an hour’s deliberation, they acquitted Simonson, saying “Not guilty in the manner and form as charged in the indictment.”

After the verdict was announced, Simonson fearing violence at the hands of Dixon’s friends and family, was escorted to the train station by a number of policemen where he boarded the train for his home in Greenville.

Winner of Rogue or Angel? Contest

Congratulations to reader Liz Ackermann, winner of The Social Historian’s Rogue or Angel? Contest for her rogue ancestor, her great-great-uncle Asa Dixon, brother to her great-great-grandfather, John Dixon. Asa Dixon was shot and killed by John W. Simonson on 27 August 1866 in a confrontation over the gathering of oysters in a month that did not contain the letter ‘R’, contrary to the laws of New Jersey. Simonson was arrested for murder but subsequently acquitted in the sensational trial that followed.

Liz Ackermann started researching her family history in 2015. Prompted by boxes of unidentified photos she jumped into genealogy hoping to find names to put to all those faces. Her research centers around Elizabeth, New Jersey, home town of all four of her grandparents. She is currently researching the family names of Dixon, Karvoius (or Karvojus), Traina, and Klein. Stop by her blog at Rooted in Elizabeth to learn more about her family research.