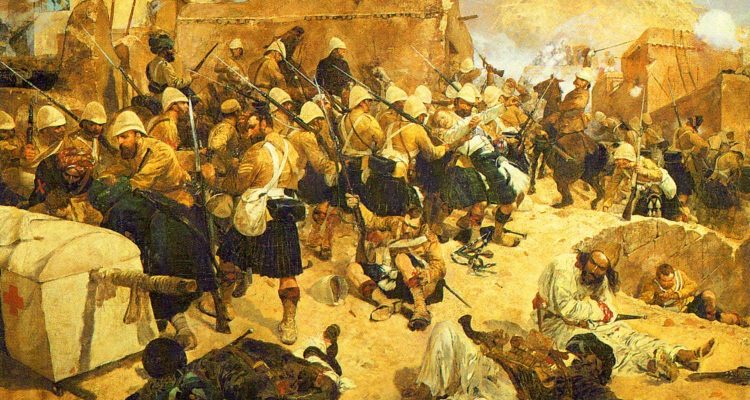 I have recently broken through a brick wall in my genealogical research and have found out what happened to my great-grand aunt, Laura Jane Williams. Join me in Part Two: James and Laura Mackie as I research the social history of the family of Laura’s husband, James Mackie and follow her father-in-law, David Douglas Mackie, into battle during the Afghan War.

In June 1878, Russia, Great Britain, France, Austria-Hungary, Italy, Germany and the Ottoman Empire met with representatives from the four Balkan States of Greece, Serbia, Romania and Montenegro at the Congress of Berlin, signing the Berlin Treaty, and easing tensions in Europe.

Peace was a fragile thing, however, and within a month of signing the Berlin treaty, Russia turned their attention to the Afghan region and dispatched an uninvited diplomatic mission to Kabul. The British demanded that Sher Ali Khan, the Amir of Afghanistan, accept a British mission as well, but were refused. Disregarding the refusal, a British mission set forth for Kabul but it was quickly turned back. The result was the second Anglo-Afghan War.

In early July, the 72nd Highlanders were ordered to Dugshai from Sialcote. 1Freeman’s Journal – Wednesday 03 July 1878 By the end of September, the prospect of war in the Punjab and North West region of India was becoming more likely and the 72nd Highlanders were in position, waiting for orders. Finally at the beginning of November, they marched to Kohat  and were on their way to Peshawar.

On 1 December 1878, fight took place at the foot of Peiwar Kotal. The British troops had move some way up the 7000 foot pass and were preparing to camp for the night when the enemy opened fire. With nightfall close, General Roberts ordered the troops to retreat to the mouth of the pass until the morning light. The following day they began up the pass with the 29th Native Infantry in the lead, but they were moving so slowly that Roberts sent them to the rear and replace them with the 72nd Highlanders. Two of the men from the 29th fired shots which could be nothing other than signal shots and the perpetrators were taken into custody. In the early afternoon, the 72nd Highlanders, along with the 5th Ghoorkas and 2nd Punjab Infantry were making camp on a flat plateau.

About four o’clock, the elephants arrived carrying the guns and suddenly a shot rang out across the plateau. It was quickly followed by another, and then a volley of shots and the men were ordered to take cover among the rocks and to remove the elephants, who were no doubt responsible for the sudden shots from the enemy. The Royal Artillery set up their guns and began to fire up the pass, but when the enemy guns began to find their marks, it was decided to withdraw again to the mouth of the pass. That night, it was clear from the enemy fires that they were holding the pass in considerable numbers and further retreat back towards Kuram was ordered.

The men from the 29th were tried on the day following the affair with the signal shots and condemned to death by hanging the following morning. The British regrouped, making their plan and on Thursday, 5 December, the 72nd Highlanders and the 5th Ghoorkas flanked the enemy by way of the Spengwai Pass, surprising them at daybreak. The British attacked the Afghan position, and by four in the afternoon, they had taken Peiwar Kotal, capturing 18 enemy guns and inflicting heavy losses as they drove the enemy back. General Roberts secured the pass and left with a small reconnaissance force made up with five hundred men from the 72nd Highlanders and the 5th Ghoorkas to scout the terrain ahead in the Shaturgardan Pass.

Roberts and his small force pursued the Afghans as they withdrew, finding that the enemy were gathered in the valley below them in the command of the brother-in-law of Shere Ali and although Kabul was visible in the distance, their forces were not sufficient to take it. They returned to Jagi Thana, marching back to the Khurum Fort by way of the Khurum River where the British would remain for the winter. The cold was already bitter and with clothing insufficient to the weather, nearly forty of the Highlanders were already in hospital with pulmonary complaints.

On 16 December, as the rear guard of the British forces guided a convoy through an area east of the Saperi Pass, the Mongols attacked and General Roberts sent out strong detachments of the 72nd Highlanders and the 23rd Pioneers to bring the convoy to safety, and they arrived in camp just before dark. Several men were killed, including one of the 72nd and Captain Goad, the baggage master and Captain Powell of the 5th Ghoorkas were severely wounded. Roberts sent a summons to the headman of the Mongols to come to Khoorum to answer for the attack, but the skirmish was considered non-political in nature since it was known that the Mongols lived by plunder.

On New Years day, General Roberts left for the Khost country with a squadron of the 10th Hussars, a wing of the 72nd Highlanders, two mountain batteries, along with native troops. Roberts expected no opposition from the enemy, but on Tuesday, 7 January, they received word that over a thousand Mongols were assembling in the villages to the east. A troop of Junjaub Cavalry were ordered to advance towards the villages and to attempt to draw their forces out into the open plain. The ruse was a success and Major Bulkeley and the 10th Hussars galloped onto the plain, and the Mongols quicly withdrew and took up positions of cover. As General Roberts arrived on the scene, heavy fire began and it was clear that the attack was in earnest, with the enemy perhaps 5000 strong.

Several companies of the 72nd Highlanders with two guns moved out, engaging the enemy from the southwest. After more than four hours of heavy fighting, the enemy began to withdraw and the British troops pressed on, looting and burning the villages to the east. At one large village, men and weapons were captured and then it too was set aflame. From the prisoners it was learned that the attack was the result of a great organization of the Mongols and the Waziris of the hills and the British determined to hold their position for a few days, to see if the situation settled before pressing on to Kandahar.

The 72nd Highlanders stayed in Afghanistan for the winter and spring before a massacre at Kabul on 3 September 1879 re-ignited hostilities, and the 72nd moved forward again to the Shutagardan, and then advanced on Kabul, seeing action at Charasiab in the cold but fine October.

On 6 October 1879, scouts had been sent out to reconnoiter all of the roads leafing to Kabul and reported back that the enemy was advancing in great force from the city. General Baker, with the 72nd Highlanders, a wing of the 5th Goorkhas, some of the 5th Punjaub Infantry, some of the 23rd Pioneers carrying four guns of the No. 2 Mountain Battery and two Gatlings took the left flank and they soon found themselves in heavy fighting. Over the course of the battle, about 70 men were killed and wounded, until finally the enemy turned and fled in great confusion. The 72nd Highlanders had lost eight men and thirty-seven more were wounded by Kabul was now within an easy march.

The 72nd Highlanders were heavily involved in the operations around Kabul in December including actions at Deh-Mozang, Takht-i-Shah and the Asmai heights, and the defence of the Sherpur cantonment.

The Road to Kandahar

After a grueling march to Kandahar in August 1880 that covered over 17 miles a day, the Highlanders were one of the leading battalions in the battle against Ayub Khan’s army on 1st September where their commander, Lt. Colonel Brownlow, was killed. Despite the tragic loss, the defeat brought Ayub Khan’s rebellion to and end, and the British prepared to withdraw.

From one of the appendices to’ General Roberts’s dispatches, we see that the quantity of ammunition expended in the reconnaissance on the 31st August was 10 Shrapnel shells, 3 common shells, 244 rounds of Martini- Henry and 14,067 rounds of Snider ammunition. The 15th Bengal Native Infantry did most firing, as they got rid of 7,940 rounds of Snider ammunition. In the engagement of the following day 68 rounds of Shrapnell shell and 21 common shell were fired, whilst 14,855 rounds of Martini-Henry ammunition and 28,509 of Snider were got rid of. The 92nd Highlanders fired 8,100 rounds, the 72nd Highlanders 6,480 and the 60th Rifles 305, whilst among the native- troops the 2nd Gurkhas fired 11,845 rounds, the 2nd Sikhs 5,621, the 23ra Pioneers 3,172, the 3rd Sikhs 2,027, and the rest smaller numbers. Western Times - Friday 26 November 1880

The regiment left Kandahar on 15th September, eventually reaching Sibi in October, and then moving on to Mian Mir. It was thought that they would soon be ordered home, but on 23 September they were ordered to Lucknow instead.

From Kandahar to Lahore is a journey of over 650 miles, and presumably the 72nd Highlanders marched through the month of October. Where Annie stayed with the children during the Afghan War is unknown but in late November of 1880, they were in Lahore along with some 10,000 troops encamped there. James was a lad of nine, Catherine was almost five and baby Agnes was two and a half.

On 22 November 1880, young Agnes Mackie died of convulsions and was buried the following day in the churchyard in Lahore. The cause of her convulsions is unknown, but an outbreak of cholera was sweeping the Peshawar area to the north-east, and it was possible that some of the soldiers brought it into camp.

Leaving the fresh grave of young Agnes behind, the Mackie family left for Lucknow, arriving on Thursday, 23 December. They were played into camp by the bands of the 73rd, the 33rd and the 10th Hussars, and the sound of the pipes likely brought the tears to Annie’s eyes.

Orders to Egypt and the Return Home to England

By August of 1882, with the situation in Egypt spiraling out of control, the 72nd Highlanders received orders to prepare to depart for Alexandria, their presence being required to defend the Suez canal. How the families of the 72nd Highlanders were shipped back to England seems shrouded in the urgency of the men’s departure preparations, but the faithful troopship Malabar might have taken them home. It arrived back in Portsmouth in early August 1882.

Her Majesty’s troopship Malabar sailed from Malta yesterday for Portsmouth, having on board a number of time-expired men and invalids and women and children belonging to regiments which recently proceeded to Alexandria.Leeds Mercury - Tuesday 01 August 1882

At some time and place between Agnes’ death in Lahore in November 1880 and the end of 1882 when the family arrived at the Isle of Wight in England, Annie Mackie, mother of two and wife of the regiment, passed away, leaving David a widow and James and Catherine without a mother.

For his part in the Second Anglo-Afghan War, David Douglas Mackie received the Afghan medal clasps for Peiwar, Charasiab, Kabul and Kandahar and was awarded the Bronze Star for the march to Kandahar.

Brick Wall Busting
As some of you might know, I’ve been searching for my great-aunt Laura Williams for a VERY long time. A couple of weeks ago, early on a Saturday morning, I received a comment on one of my blog posts about Laura. The first words were: “I can help. Laura is my great-great-grandmother…” My research over the last few weeks has taken me from the Isle of Wight to India, to Egypt, to Scotland, and to Ireland and back to the Isle of Wight. Laura’s story involves the British army, a decorated war hero, arrest, a trial and a conviction. It touches on prostitution, an unfit mother, adoption, suicide and a Scottish divorce. Join me as I uncover the details of James and Laura Mackie’s story.