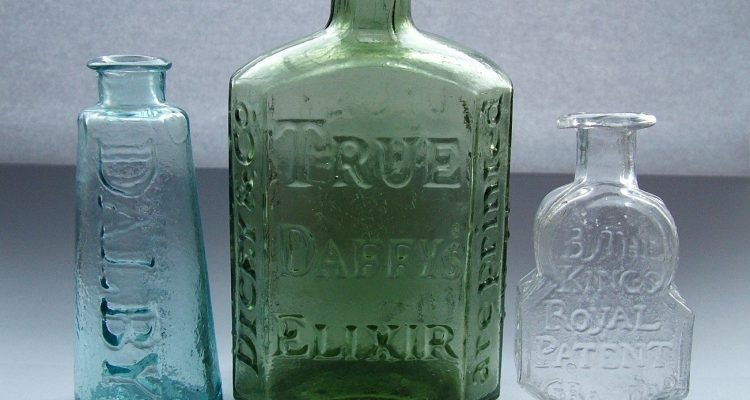 Patent medicines are not, as the name would suggest, medicines that have been patented but rather they are commercial products containing ‘secret ingredients’ that are sold directly to the public to cure a variety of diseases, aches and pains. Such commercial preparations grew in popularity during the nineteenth century at a time when medical care had more than a few shortcomings. However, many of these supposed cures contained secret ingredients that would do more harm than good, even, in some instances, causing death to the patient.

By the end of the nineteenth century, testimonials often appeared in the local newspapers for these products from local residents such as the advertisement that appeared on page seven of the Isle of Wight Observer on Saturday, November 10, 1900.

A STATEMENT BY A RYDE WOMAN

Do you believe all you read?
We think not.
It is hard to believe the story of a woman you don’t know.
The statement given here below, was made by a woman whom you do know – by a Ryde woman.
Proof is one thing, claim is another, Claim means what the manufacturers say – Proof means what Ryde people say – The testimony of neighbours and friends is what counts;
What other testimony can be as strong?  Read her statement: –
Mrs Harriet Williams is a very respectable woman and lives at 75, St. John’s Road, Ryde.  She says:

“I am 74 years of age and have resided here these 40 years. I have suffered on and off for the last ten years from kidney troubles. I had dreadful pains in the small of my back, and I used to be so bad that when I woke I could hardly get out of bed in the ordinary way, but was obliged to slide out sideways. When I was up I felt fit for nothing, and it was a long time before I could get out at all. My breath was short, and I had urinary troubles badly. I tried all sorts of remedies, but they did me no good. Then I happened to hear of Doan’s Backache Kidney Pills, and I thought I would give them a trial; so I got some at Smith’s, the chemist in High Street and since taking them I am pleased to say I have lost the pains in my back. I can now go about my work with ease and comfort, and I feel better in every way. They are really a very good pill, and I will recommend them to others.” (Signed), (Mrs) Harriet Williams.

Doan’s Backache Kidney Pills are sold by all chemists and drug stores at 2s 9d per box, (six boxes 13s, 9d) or sent direct, post free, on receipt of price, by the proprietors, Foster McClellan Co, 57, Shoe Lane, London.  If you are ill, write and tell us your symptoms, we will be glad to reply.
Be sure to ask for the same pills that Mrs Williams had.

Doan’s Kidney Pills were analysed many times to determine their active ingredients. In the 1911 edition of Nostrums and Quackery, published by the American Medical Society, it was noted that the active ingredients of these pills appeared to be potassium nitrate (saltpetre), pitch and oil of juniper. Another testimonial to the effectiveness of the medicine appeared in the Wood River Times on 16 February 1916 where Mrs. I. T. Fitzwater declared that Doan’s Pills had ‘put her on her feet in a short time’ after her prolonged suffering from weakness, dizziness and rheumatic pains in her back.

The unfortunate Mrs. Fitzwater had been deceased for over a month before this testimonial appeared.

Although sold as a remedy for lower back pain caused by kidney ailments, Doan’s Kidney Pills with potassium nitrate would actually irritate and even cause damage to kidneys that were already diseased.

Marketed in the United States and the United Kingdom, Mrs. Winslow’s Soothing Syrup first released in 1849, was guaranteed to sooth infants suffering from teething or colic.

According to the Freeman’s Journal of Dublin, Ireland on Tuesday 9 June 1863, for only one shilling and one and a half pence per bottle, this Curtis and Perkins medicine was a never failing success for thousands of cases but according to the American Medical Association, it was one of the preparations they designated as ‘baby killers’.

In the United Statues, the early preparations of Winslow’s Soothing Syrup contained morphine and alcohol while in Great Britain, they contained alcohol and potassium bromide, only because medicines containing morphine had to be labeled as poison. When the active ingredients were publicised, many drug stores refused to carry the remedy and the formula was changed and the alcohol and morphine were removed.

Warner’s Safe Cure was advertised as a cure for Bright’s disease, guaranteed to treat both kidney and liver complaints. It was introduced to the public by H.H. Warner of Rochester, New York in 1849 and was advertised in both the United States and Great Britain with testimonials from doctors who extolled it’s virtues.

Over two years ago my attention was first called to the use of Warner's Safe Cure for Bright’s disease. Notwithstanding the good opinion I had everywhere heard of it, I was somewhat hesitated to recommend it; but a personal friend whose application for insurance on his life was rejected on account of Bright's disease, came to me. A chemical and microscopical examination of his water revealed quantities of albumen and granular tube casts, confirming the Bright's disease. After trying all the usual remedies in vain, I directed him to use Warner's Safe Cure. I was greatly surprised to observe a decided improvement within month. Within four months, no tube casts could be found, and only trace of albumen; and, as he expressed it, he felt perfectly well. After this demonstration of its power, I prescribed it in full doses in both acute and chronic Bright's disease, with the most satisfactory results. In a large class of ailments where the blood is in an unhealthy state—where there is no evidence of organic mischief, but where the general health is depleted, the face sallow, the water coloured, constituting the bilious condition—the advantage gained from the use of Warner's Safe Cure is remarkable. - l find that in Bright’s disease it seems to sooth and heal inflamed membranes, and wash out epithelial debris which blocks the tubuli uriniferi, and to prevent the destructive metamorphosis of tissue. ... l am willing to acknowledge and recommend thus frankly the virtue of Warner's Safe Cure. RA Gunn, MD Published in the Cornishman in Cornwall, England on Thursday 29 April 1886

When analysed in 1914, the Warner’s Safe Cure was found to contain 14.4 percent alcohol, 7.72 percent glycerin and 1.75 percent potassium nitrate, a mixture that would not only not cure Bright’s disease, but that would hasten the death of anyone so afflicted that took it.

Marketed for pale people, Williams pills were found to contain more than 37 percent sugar in addition to 13 percent iron sulphate, 11 percent potassium carbonate, 14 percent starch and 17 percent vegetable substance. The instructions on the product suggested that sufferers should take a laxative, bathe frequently, keep the bowels regular, partake of a nutritious diet as well as taking the pink pills. No doubt the advice on the package would do more good than the sugar pills contained within.

Besides the patent medicines meant to cure diseases and medical conditions, there were many that claimed to solve cosmetic woes such as small breasts, thinning hair, wrinkles on the face or age spots on the hands.

Think of the mad tragedies of wives sitting alone at home, watching the clock through tear-dimmed eyes, when they fear that some woman of a softer skin has coaxed their husbands from the paths of righteousness.

In 1905, the first of a series of articles appeared in Collier’s about the Great American Fraud of patent medicines. The articles exposed the 75 million dollar American patent medicine industry and gave details of the harm these medicines did to the public. Many of the so called cures were debunked as nothing more than fraud and poison. These articles were then assembled and reprinted in booklet form by Collier and Son.

Continuing the campaign against dangerous patent medicines, the first edition of Nostrums and Quackery published towards the end of 1911 was about 500 pages in length. So popular was it that it was sold out in less than a year and a second edition had to be prepared. As more information about patent medicines was accumulated, the American Medical Association began to publish articles weekly which they issued in pamphlet form, distributing to doctors and to the public at as low a cost as could be managed.

From the early twentieth century, new legislation such as the United States Pure Food and Drug Act of 1906 was put in place to protect the unsuspecting public from patent medicines.