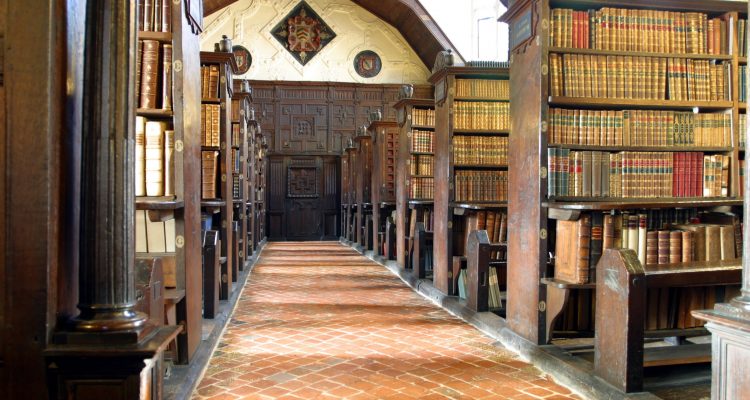 While the concept of a library is as old as the written word, early libraries were only accessible to a select few. Throughout the Middle Ages, libraries were established, often in monasteries but access was strictly limited. Manuscripts of this era were created by the labourious process of hand copying, making them very valuable and books were frequently chained to the shelves.

Throughout the seventeenth and eighteenth centuries, in what has become known as the age of enlightenment, many important libraries were built. One of the oldest libraries in Europe, the Bodleian Library of Oxford University was first opened to scholars in 1602. In 1610, Thomas Bodley entered into an agreement with the Stationers’ Company of London to ensure that a copy of every new book published in England would be deposited with the library. However no books from the new Bodleian library were to be lent to readers and even King Charles I was refused permission to borrow a book in 1645. In the eighteenth century, lending libraries such as the Norwich Subscription Library were created, however most of these only allowed lending by either membership or by subscription. The Norwich library was founded in 1784 and although it was called a public library, it was actually private and funded by subscriptions.

Bury and Norwich Post – Wednesday 02 September 1801″]NORWICH PUBLIC LIBRARY ~ THE Subscribers to the Norwich Public Library are requested to attend the ANNUAL MEETING, which will be held on Thursday, Sept. 3d at the Library Room, in St. John’s Maddermarket, precisely at Four o’clock in the Afternoon ; when the President’s accounts will be examined, the Committee for the ensuing year appointed, and subscriptions received which become due on the 1st of September. At this Meeting also proposals will be made for increasing the subscription to half a guinea, and for the attendance of the Librarian one hour in the evening and only two in the morning.

The British Museum, established in 1751, had an extensive library, however it was not open to the public. Access was only permitted with a pass and it frequently took up to four weeks to obtain one. Once in the library, patrons were not able to browse the books but had to request them from the librarian.

By the middle of the nineteenth century, the push for truly public libraries began to gain force.

The Museums Act of 1845 empowered town councils of  cities with at least 10,000 inhabitants to levy taxes to provide public museums and a number of cities took advantage of this to build public libraries, including Warrington and Salford. Under the act, town councils could use the tax money collected to purchase land, erect buildings and furnish them, however it was intended that books, rather than being purchased, should be donated by individuals.

Public Library and Museum for Salford. We refer with pleasure to the proceedings which took place in the mansion house of Peel Park on Monday last—a report of which appears elsewhere —for the purpose of establishing a public library and museum in Salford. Such an undertaking must always commence auspiciously when it enjoys, not only the countenance, but the active personal aid, men of great social influence and lofty genius like the Earl of Ellesmere, and venture to hope that this laudable work will have the liberal and cheerful co-operation of all classes in the community.

Other cities quickly followed suit and by 1857, there were free public libraries in  Winchester, Manchester, Liverpool, Bolton, Kidderminster, Cambridge, Birkenhead, Sheffield and Norwich. Advertisements began to appear in local newspapers, soliciting books for the new libraries.

OLD BOOKS WANTED to Purchase for Public Library.—Noblemen, Clergymen, and others, wishing to dispose of their Libraries, (wholly or in part) will find this a good opportunity, Letters addressed to RICHARD MARCH, 7 Corn Street, Bristol, will be confidentially and strictly attended to. Booksellers need not apply but as Agents.

The libraries were an instant success as this 1857 report about the free library in Liverpool describes. The librarian’s fear that patrons who borrowed books and took them home to read would not subsequently return them was disproved.

There is a free library in Liverpool, the fifth annual report of which has just been published. It is composed of a reference library—that is where any one walk in, call for a book, and sit down and read it; and of lending library, from which any person of respectable character, or anyone recommended by a respectable person, may get out any book for perusal home. In the reference library, it may be as well to state, there have been, during the five years of its existence, 710,000 readers, and twenty shillings, it is stated, would cover all the losses of books. In the lending department the issues have risen from 35,973 the first year to 308,200 in the fourth year. The total issues in four years have been 672,547, this large number only six books (and we mention this for the benefit of the King’s College Professors, who will not lend books from their library, kept up as it is out of the public taxes, to the general public all, nor to their own Graduates except on the deposit of a pound sterling, from the fear that the books so lent might never be returned) have been permanently lost to the library. In this report of library, resorted entirely by the working and humbler classes, we find it stated that of the daily average of 583 readers, 201 represent novel readers ; 170 miscellaneous literature ; whilst history and biography, the next largest class, only numbers 42.

The Cheltham’s Library in Manchester is known as the oldest free public library in the UK. Established in 1653, it is open to all and currently holds more than 100,000 volumes, most of which were published before 1851. The library was established under the will of Humphrey Cheltham, a Manchester textile merchant, banker and landowner who left a bequest to purchase buildings for use as a free library and a charity school.

In years past, the entire history of who had read a library book before you would be displayed on the card in the back of the book. Later, for privacy, patrons would be identified only by number until the process became anonymous with the introduction of mechanized checkouts.

Lending libraries were closed in Sheffield in 1887 when the town council became concerned that the disease was being spread through the borrowing of books from the free libraries of Sheffield.

SMALL-POX AND LIBRARIES. THE TOWN COUNCIL’S EDICT. In a leading article the Standard today says:— ” The Sheffield Town Council, having come the conclusion the epidemic of small-pox at present raging in that town is spread by means the infection carried in books, has resolved to close the lending departments the Free Libraries. How far the authorities are justified in the step they have adopted have for the present no means of knowing. It may, however, be taken for granted that serious proposal would not have been put in force unless the medical officers of health were fully convinced that they were acting the best interests of their fellow citizens. This being the case, the Sheffield people must patiently submit to a temporary deprivation of their light literature, and, what is more, must be prepared for similar inconvenience whenever any zymotic disease takes the shape of an epidemic. Perhaps, the sooner the circulating libraries of Sheffield are closed, the better will it be for all concerned.

As literacy rates amongst children increased during the eighteenth century, many institutions established libraries specifically for children and books were written to appeal to the younger reader. My grandfather received a copy of a book entitled ‘The Jessamines” for regular attendance at the Broompark Mission in Sheffield.

The full text of the book can be read on the Internet Archive.