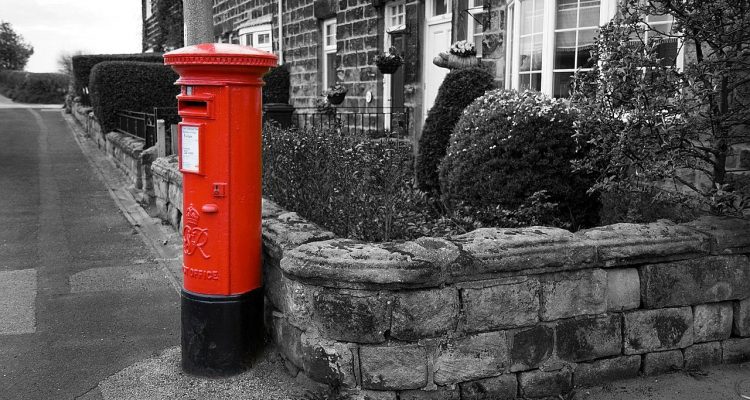 When Charles I first introduced public mail service in 1635, letters were carried from one ‘post’ to the next ‘post’ by carriers on foot or on horseback. Up until that time, the post system was reserved for the use of the King and his Court. At each ‘post’ the ‘postmaster’ would remove the letters for his immediate area and then hand the rest to another ‘post boy’ who would carry them on. Letters took a long time to reach their destination with foot messengers travelling less than eighteen miles in a day. A letter sent to Edinburgh from London might not receive a response for nearly two months. However, this system would continue for another century and a half. 1“Travel through Time with Royal Mail.” Royal Mail. Accessed July 22, 2015. http://royalmailheritage.com/main.php.

There were six main post roads throughout England and Scotland and the very first ‘post office’ was set up in Bishopsgate Street in London. The four main post roads ran between London, Dover, Plymouth, and Edinburgh with Bristol and Yarmouth being added by the end of the century. Letters sent through the public postal service could travel only over these routes. This meant that a letter sent from Yarmouth to Edinburgh would have to travel through London. However under this scheme, letters were to travel both day and night, and therefore could travel 120 miles in a 24 hour day. In the beginning, a letter written on a single sheet of paper would cost 2d to travel 80 miles with postage to Scotland from London being 8d and to Ireland 9d. 2“The Gentleman’s Magazine.” Google Books. 1894. Accessed July 22, 2015. http://bit.ly/1Om5blh. In addition to this official post service, hundreds of carriers delivered letters and packages across the dominion in direct competition to the service.

In 1657, fixed rates were established for the delivery of letters through the post system in the Postage Act as passed by Parliament.

“Whereas it hath been found by experience, That the Erecting and Settling of one General Post-Office, for the speedy Conveying, Carrying, and Re-carrying of Letters by Post, to, and from all Places within England, Scotland, and Ireland.”

In 1685, William Dockwra established a penny post within London, since all post within the city had previously travelled by private messenger. The city was divided into seven postal districts, each with a sorting office. Letters under one pound were collected from various offices hourly and were delivered in the most populated parts of the city ten or twelve times a day. Dockwra’s efforts were put to and end when he was taken to court and found to be guilty of infringement in a judgement that found in favour of the Duke of York who had been the recipient of the revenue of the official post office since 1663. The London mail system was absorbed into the Post Office.

By latter half of the eighteenth century, the post system had grown and the cost of a letter had gone up, but little else had changed. Letters still moved very slowly. Post boys were an endless source of trouble. They carried letters on horseback and, being so poorly paid, they sometimes robbed the post bags they carried. The roads that they travelled on were in exceedingly poor repair with deep ruts and so dark at night that the road was almost impossible to distinguish from the surrounding countryside, slowing their journey even more. Post boys were often attacked by highwaymen who made off with the post bags, sometimes wounding or even killing the unlucky post boy in the process. In order to speed the delivery of their letters, some would package them in a parcel so they could be delivered by one of the coaches that ran from one town to another, rather than trusting them to the postal service.

In 1784, a plan to speed up mail delivery and make it more reliable was devised by John Palmer, a proprietor of the Bath theater. Palmer’s plan was to convey the mail by coaches in the same way that packages were delivered. Not only could coaches travel eight miles an hour, Palmer further proposed that the coaches be guarded by men armed with blunderbusses to ensure their safe arrival. 3Blunderbuss is a short, large caliber, muzzle loaded firearm that is used with shot or other similar projectiles. The plan was tested on the Bristol to London mail run and having proved successful, it was expanded to other main routes. During the same period, rates for the post were increased, doubled from a penny for a one-post distance to two pennies for the same service. As time went on, the rates would rise again and again until by 1812, it would cost 4d to send a letter fifteen miles.

“That the issue of Postage Stamps for sale to the public be commenced as early as practicable; that such issue be, the first instance, confined to London; and that it be extended first to Dublin and Edinburgh, and afterwards to other parts of the kingdom in such order as the Commissioners of Stamps and Taxes may determine, and as rapidly as the necessary supply can be obtained.”

And so the new Penny Black and the lesser known Two Penny Blue postage stamps officially went on sale to the public on 6 May 1840. The penny stamp was for letters weighing up to half an ounce, while the two penny stamp could be used on letters up to a full ounce in weight. Under the new scheme, the sender would prepay to send their letter, eliminating the chance that the recipient would refuse the delivery. To encourage the public to adopt the new stamps, it was ordered that from then on, letters insufficiently stamped or pre-paid would be subject to double postage when delivered.

Stamps, covers and envelopes could be purchased from the post office or from licensed stamp distributors in various quantities with the stamps costing 1d or 2d each, the covers costing £1. 2s. 4d. for 240 and the envelopes £1. 1s. 9d. for 240 units. The stamps were backed with a glutinous wash on back and were sold either in sheets or cut up ready for use. The covers were also available singly or in sheets while the envelopes were sold in sheets only and the purchaser had to cut and make them up.

The stamps, covers and envelopes had several features to prevent forgeries. They were printed on a specific paper manufactured by Mr. John Dickinson and the covers had three red lines inserted in the woof of the paper towards the inner side and three blue lines towards the outside of the cover. The envelopes had similar lines with a different placement and had decorative drawings although these were commonly criticised as being too elaborate for the purpose, allowing no room for an address. The stamps were printed on watermarked paper and each stamp also had the watermark of a crown. Sheets of 240 stamps were arranged in 20 rows of 12 columns and each stamp was printed with different letters on the bottom corners in such a way that no two stamps from the same sheet would carry the same letters.

Within a year, it was found that the black stamp, which was cancelled in red ink, could often easily be reused and so it was discontinued and the penny red stamp was issued, remaining in use until 1879.

Letter to the Editor

Sir, With a view to abridge the labour of the letter carriers, and so save public time, allow me to suggest,

1st. That a recommendation be issued from the Post Office that a letter-box with open mouth be fixed in every door, into which the letter carrier may slip all letters and newspapers with which he may be charged for each house, continuing to knock or ring, as at present, in case of no payment being required; in which case, having rung so as to warn the inmates of his call he may save much time, by passing to the next house, without waiting for the answer to his summons.

2dly. In the event of there being any packet requiring payment, let him give, after the usual two knocks, a third and loud one, or an extra pull at the bell.

This will sufficiently advertise the people in the house that matters of unusual urgency require their attention at the hall-door.