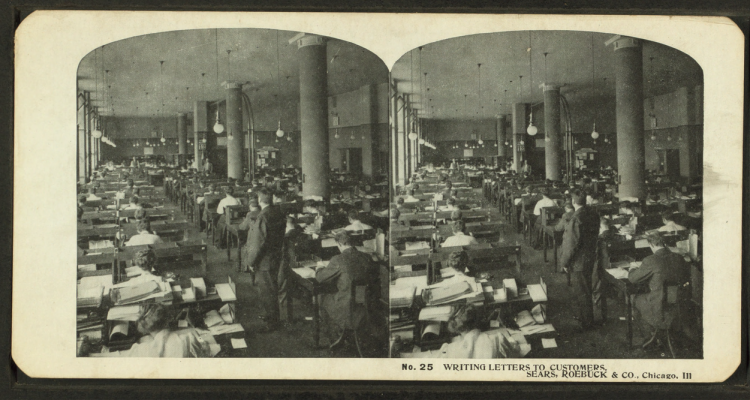 Long before the internet and online ordering, mail order catalogues were one of the only ways that the American rural population had to buy a variety of merchandise for themselves and their homes. Before the advent of mail order catalogues, people in isolated communities throughout the United States purchased from general stores, often from a very limited selection of goods. The price they paid for their purchases was often inflated due to the scarcity of competition for the shop owner and the high cost of carrying inventory.

Railway station agent Richard Warren Sears stumbled upon an opportunity to purchase a large selection of watches from a Chicago area jeweler who was seeking to reduce his inventory. Sears was able to sell the watches to his fellow railway agents and quickly ordered more watches which he sold through a mail order catalogue under the company name ‘The R.W. Sears Watch Co.’ When this venture proved successful, Sears moved to Chicago where he went into business with Alvah Roebuck and the first Sears watch catalogue was published in 1888.

By 1893, Sears and Roebuck decided to diversify their business, no longer selling just watches but general merchandise as well. In 1894, their catalogue was 322 pages and featured a variety of products. Customers would complete an order form, send payment and then receive their orders, often delivered by one of the new railway lines that were spreading across America in the period.

By 1895, sales had exceeded $750,000 and continued to grow as the product lines expanded to include new and exciting products including toys, groceries, sewing machines, farm equipment, kitchen stoves and even eye glasses. Julius Rosenwald, a wealthy clothing manufacturer bought out Roebuck’s interest in 1895. In 1896, free rural postal delivery was introduced in the United States, making mail order shopping even more popular. No longer did the rural Sears customers have to journey to the nearest pick up location. Their shopping would now be delivered directly to their door by the new service. The new postal arrangement resulted in unprecedented growth in the Sears Roebuck catalogue business and their catalogue in the Spring 0f 1896 boasted that there building at Fulton and Desplaines in Chicago was the largest business of it’s kind under one roof.

In 1896, Sears Roebuck employed 500 people at the Fulton store including 30 stenographers, 25 corresponding clerks, 12 expert buyers, and 12 mail clerks. They had four large elevators travelling from floor to floor in the building. They boasted that they sold 2,000 suits every day and a buggy every 10 minutes; a watch each minute and a revolver every 2 minutes.

The freight department was in the basement and the main floor was the hub of the office with over 200 people worked to process the mail orders. The second floor housed the Watch and Jewelry Department, the Gun and Sporting Goods Department and the Musical Goods Department along with offices of the Advertising Manager and the Stationery and Advertising staff. The third floor was where the Harness and Vehicle Department was located along with another Department of Furniture, Baby Carriages and Crockery. The Hardware department took up the entire north wing of the floor. On the fourth floor, outbound shipments were processed and on the fifth floor there were Gent’s Furnishings, Books, Dry Goods, Ladies Wearing Apparel including hats, boots and shoes. The sixth floor was home to the massive Clothing department.

The policy of our house is to supply the consumer everything on which we can save him money, goods that can be delivered at your door anywhere in the United States for less money than they can be procured from your local dealer, and although our line covers about everything the consumer uses, there is scarcely an article but what will admit saving of at least 15 per cent and from that to 75 per cent, to say nothing of the fact that our goods are as a rule of a higher grade than those carried by the average retailer or catalogue house, and we earnestly believe a careful comparison will convince you that we sell more goods and of better value than you could obtain for the same money from any other establishment in the United States.

There is not a town in the United States where we have not sold goods.

Sears added many specialty catalogues for their customers and issued the general catalogue twice a year.

The format of the catalogue changed from the smaller 6 inch by 9-inch book to a full-sized 8 inch by 11 book and in 1903, the catalogue included the guarantee Your money back if not satisfied.

The following year saw the introduction of a customer loyalty program as Sears introduced Profit Sharing Certificates, which could be redeemed for selected items.

In 1905, Sears even introduced a line of automobiles manufactured by Lincoln Automobile Works of Chicago.

In the Fall 1907 catalogue, Sears offered a 6-month bookkeeping course which included an astounding seven pounds of materials including lessons, a free penmanship course and a six month supply of bookkeeping materials.

Revenues had grown to more than $50 million by 1907 and Sears began selling home building kits under the name Sears Modern Homes, complete with almost all the materials required to build a home and detailed instructions geared to allow the home owner to do his own construction. Models available ranged from small bungalows to much larger 14 room homes with upwards of 70,000 kits being sold between 1907 and 1940.

The first floor of the house was accessed through the oak veneered front door which was an impressive three feet by seven feet and 1-3/4 inches thick. The front door was flanked by two side lights which were glazed with bevel plate glass and it opened into a centre entrance hall to reveal the open oak staircase. The front hall was flanked by a large dining room on one side and a substantial living room on the other, both with large cased openings and nine-foot ceilings. From the living room was an arched opening to a more intimate den which could also be used as a library. Behind the dining room was a spacious kitchen and a walk-in pantry. The main floor would have oak flooring throughout with the exception of the kitchen and pantry which were fitted with clear maple flooring.

The roof was made from cedar shingles which could be stained with creosote and enough paint was provided to paint the outside. Available extras included a warm air heating system for either hard or soft coal or for the more adventurous, a steam heating system. A hot water heater and plumbing outfit could be purchased as could an acetylene lighting package.

Carlinville, Illinois has a large collection of Sears kit homes. The kits were purchased by Standard Oil who had opened two new coal mines in the town in 1917. Faced with a housing shortage for their miners, they placed a $1 million order with Sears and Roebuck for 156 homes to be built in a nine-block neighbourhood in the north-east side of the town. Today, 152 of the original Sears homes are still standing.

The home kit line was finally discontinued in 1940 when building codes and standards made kit homes too expensive and too complicated to build for the average householder.

It was 1925 when Sears opened their first retail store on the West side of Chicago. Two years later there were 27 stores in operation. By 1931, retail sales surpassed mail-order sales for the first time.

Like many of you, and like my parents before me, I recall the great excitement of receiving the annual Sears Christmas Wish Book in the mail in the months leading up to the Christmas season. I would spend hours pouring over the toys and books on offer, trying to decide which of the huge selection should feature prominently on my Christmas list that year. First published in 1933, the Sears Wish Book was a cornucopia of toys, games and everything else that a child could possibly want for Christmas.

In the very back of the 1937 Sears Christmas Catalogue, Santa himself even made a special pitch to the children, asking them to write their letters to Santa via Sears-Roebuck, including  a handy form for listing of the pages and items that they wanted to receive that year.