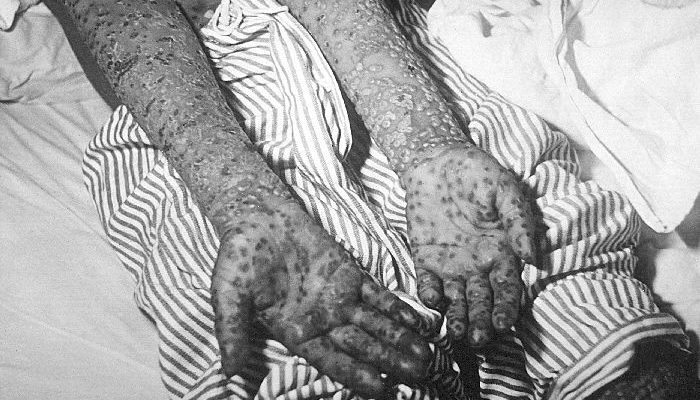 One of our ancestor’s greatest fears was the highly contagious smallpox, a disease that has thankfully been considered to be eradicated from the earth since 1977.

In 1967, the world health community launched a global effort to eradicate smallpox. It took a coordinated, worldwide effort, required the commitment of every government, and cost $130 million dollars. By 1977, smallpox had disappeared. ~Liya Kebede

Within seven to seventeen days after being exposed to smallpox, the victim would experience fever, chills, headache, nausea, vomiting and severe muscle aches for two to four days. By the fourth day, the fever would drop and the rash would appear.  Once the rash appeared, the patient was infectious, but was often isolated at the appearance of the fever. The rash begins as flat or raised spots called macules which became raised papules. The papules enlarge and become filled with fluid and are then called vesicles. As the fluid changes from clear to pus-like, the spots are called pustules. Fever during the appearance of the rash is common.  After time, the pustules crust over and eventually the scabs fall off. This process can take from three to four weeks and scarring is common. The infectious period ends only when the last scab has fallen off.

Smallpox is generally spread by close contact (less than six feet) but may also be caused by contact with lesions or contact with contaminated bedding or other materials. 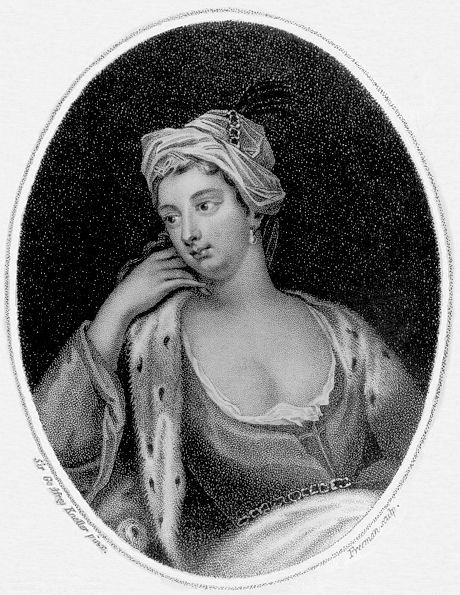 Variolation, or the process of inoculation with smallpox, is thought to have been introduced to England by Lady Mary Worley Montagu, wife of the British ambassador to Ottoman Constantinople in 1721, who, along with her two daughters, had the procedure performed, and during an outbreak of smallpox in 1721, escaped infection. In a letter by Lady Montagu to Sarah Chiswell, dated 1 April 1717, she describes the treatment:

The small-pox so fatal and so general amongst us is here entirely harmless by the invention of ingrafting (which is the term they give it). There is a set of old women who make it their business to perform the operation. Every autumn in the month of September, when the great heat is abated, people send to one another to know if any of their family has a mind to have the small-pox. They make parties for this purpose, and when they are met (commonly fifteen or sixteen together) the old woman comes with a nutshell full of the matter of the best sort of small-pox and asks what veins you please to have opened. She immediately rips open that you offer to her with a large needle (which gives you no more pain than a common scratch) and puts into the vein as much venom as can lye upon the head of her needle, and after binds up the little wound with a hollow bit of shell, and in this manner opens four or five veins. . . . The children or young patients play together all the rest of the day and are in perfect health till the eighth. Then the fever begins to seize them and they keep their beds two days, very seldom three. They have very rarely above twenty or thirty in their faces, which never mark, and in eight days time they are as well as before the illness. . . . There is no example of any one that has died in it, and you may believe I am very well satisfied of the safety of the experiment since I intend to try it on my dear little son. I am patriot enough to take pains to bring this useful invention into fashion in England, and I should not fail to write to some of our doctors very particularly about it if I knew any one of them that I thought had virtue enough to destroy such a considerable branch of their revenue for the good of mankind, but that distemper is too beneficial to them not to expose to all their resentment the hardy wight that should undertake to put an end to it. Perhaps if I live to return I may, however, have courage to war with them.

However, the practice of inoculation was dangerous, and sometimes the resulting case of smallpox was severe enough to cause death. Many preferred to take their chances with the possibility of contracting the disease naturally, rather than risk possible death from the inoculation. 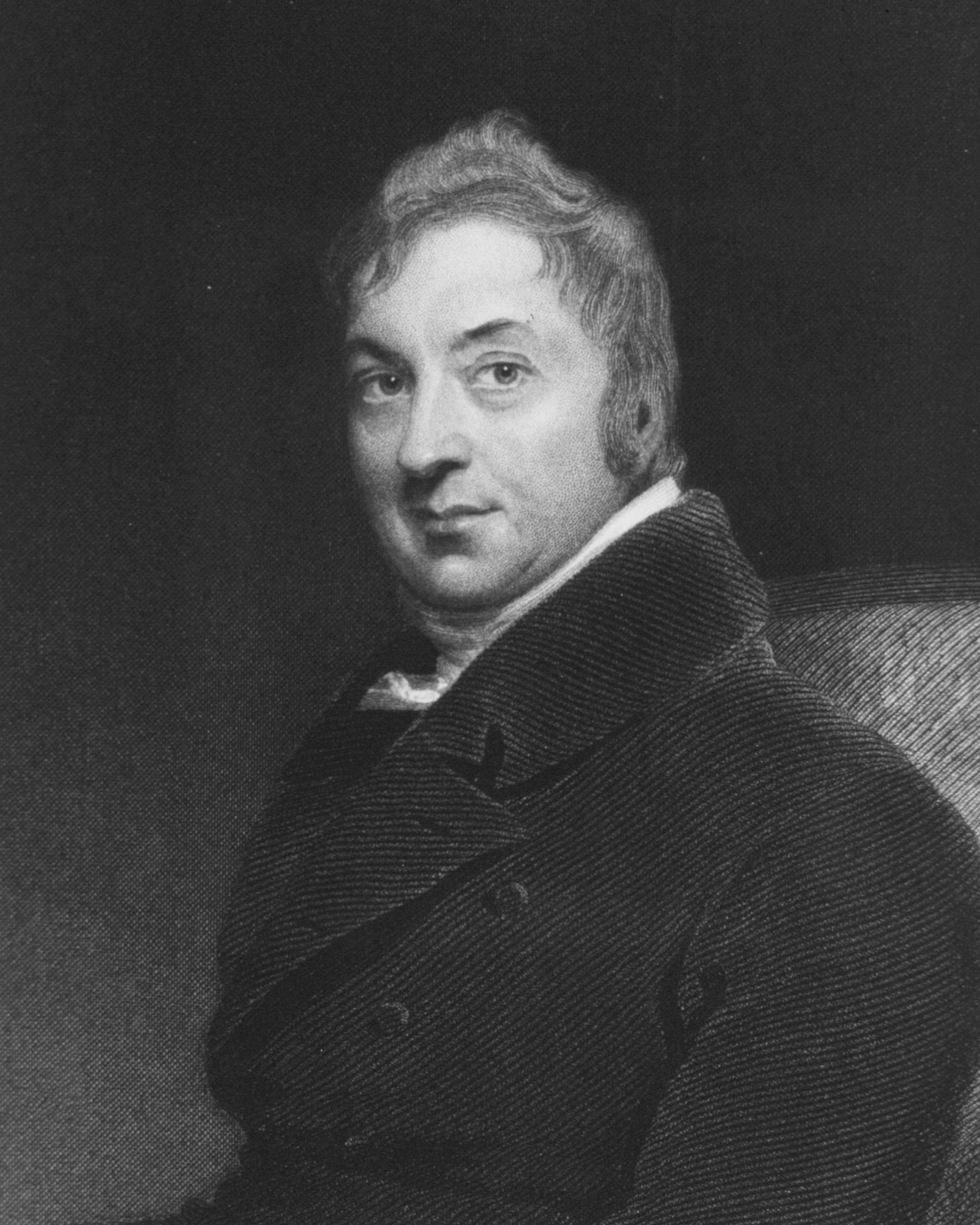 In 1796, Dr. Edward Jenner, after noticing that those who worked with cattle and had been infected with cowpox never contracted smallpox, used cowpox to inoculate James Phipps, an eight-year old by who was the son of Jenner’s gardener. He inoculated Phipps in both arms. After Phipps recovered from a brief fever, Jenner subsequently injected him with smallpox and he showed no signs of infection.

There was much debate as to which type of inoculation should be used. Controversy raged until 1840 when legislation was passed banning variolation. In 1853, further legislation was passed, making vaccination compulsory for every child within three to four months of their birth. Failure to do so, would result in a £1 fine, payable to the local poor-rate.

Noted Smallpox Outbreaks
1751-1753 – during this epidemic, the practice of variolation (inoculation with the smallpox virus) became more wide spread.
1796 – over 3,500 deaths in London and 35,000 deaths throughout the British Isles
1816-1819 – starting in central England in 1816, spreading in subsequent years to Nottinghamshire, Staffordshire, East Anglia and London and Canterbury.
1825-1826 – from Newcastle to Canterbury, many were infected with the poorer population suffering the most, and being the most likely to shun variolation or vaccination.
1837-1840 – claimed 42,000 lives. Began in the west and southwest and spread through Wales and then east and then to the manufacturing towns of Lancashire.
1871-1872 – last great outbreak of smallpox in the British Isles, resulting in about 42,000 deaths over two years. Spread by refugees coming to England to escape the French-Prussian War, this epidemic hit primarily adolescents and adults.
1901-1902 – last epidemic of smallpox to affect the British Isles.