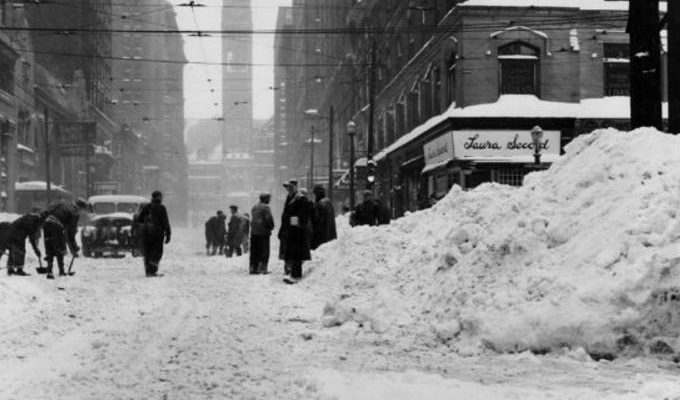 On Monday, December 11, 1944, the forecast for Toronto, Ontario was for fresh to strong winds with some snow Monday and Tuesday, probably part sleet, but by noon on Tuesday, December 12, it was clear that forecasters had missed the mark.

Twenty-one inches of snow-covered the ground in Toronto by lunchtime on Tuesday and still it continued to fall. Transportation was virtually at a standstill with only the main lines of the Transit system running, and that with great difficulty. Service was slow and motormen were driving carefully with many pedestrians walking on the track allowance. With 24 sweepers, 5 scrapers, 6 plows and 15 storm cars, the Toronto Transit Commission was having trouble keeping up with the storm and called for people to volunteer to shovel the snow from the tracks. All bus service was suspended and private vehicles were banned from Toronto streets with the exception of doctor’s cars, ambulances, fire trucks, milk wagons, meat and food trucks, emergency vehicles for the electric, gas and telephone companies, coal trucks, newspaper trucks and, of course, the navy, army and air force vehicles.

Deliveries of bread and milk were all but shutdown and residents were warned to go easy on what they had. Suppliers were unable to get their trucks out and attempted to deliver the most urgent orders by streetcar. For the first time in history, the downtown department stores, Eaton’s and Simpson’s were closed. The Toronto Stock Exchange was shutdown because employees could not make it into work. At the Royal York hotel, the 1200 guests who had stayed the night remained, unable to leave. Eight had checked out early, but three of those returned as soon as they reached the door and saw what awaited them outside. All downtown hotels were booked to capacity and were turning away new guests.

At Research Enterprises in Leaside, management was not concerned about getting the day shift into work but about getting the night shift home. They used their own plows to clear a road to Pape and Danforth and then transported their employees by six-wheel company trucks to the streetcar lines. By noon, only 50 of the 3,500 night shift had gotten safely away.

At De Havilland on north Dufferin, the plant was completely snowbound and at the Small Arms factory in Longbranch, only 130 of the 2000 strong day shift had arrived for work, with the 7:30 am train overdue at 9:30 that morning. General Engineering in Scarborough closed their plant for the day.

At the telephone company, emergency operators camped out in a downtown Toronto office building on 310 beds brought in by the army and were provided with lipstick, toothpaste, toothbrush and soap as they kept the telephone services humming day and night throughout the blizzard.

The suburb of Weston was buried under six feet of drifting snow and everything there was virtually shutdown and the war plants in the area were closed for the day. Despite this, bride Miss Margaret Haxton and her groom, L.A.C. Fergus Kelly made it to St. John the Evangelist Roman Catholic church only an hour and a half late, having skied for almost a mile through the five foot drifts and were married by Rev Father Keane who lived next door to the church. The wedding reception was delayed until Wednesday evening.

In Scarborough, a young mother went into labour in an isolated farmhouse. Unable to reach the city due to the storm, she called the police who arranged for a local doctor to try to reach her. Dr. Courtice, a 70-year-old physician, gamely set off through the chest high drifts, eventually meeting the woman’s neighbour who was driving a horse and cutter. But even the cutter could not make it through and when it became stuck, he set off again on foot. By the time he reached the house, the baby boy had been delivered by his grandparents and there was nothing for the doctor to do beyond warming himself after his hike.

In a similar predicament, an expectant Richmond Hill was strapped to a child’s toboggan and pulled a quarter of a mile though the snow to where the plow had gotten stuck less than a mile from Yonge Street. From there, they ‘raced the stork’, transporting the woman to York County hospital in Newmarket. One Toronto woman was taken to Toronto East General Hospital in a furniture van, arriving just in time to give birth to a daughter and another woman travelled by foot, streetcar and finally by transport truck to St. Joseph’s where she too gave birth to a daughter.

At Malton Airport, all planes were grounded. The last plane to depart had left at 1:12 am that morning and nothing was flying in Ontario that day. For 3000 teachers and almost 100,000 children, Tuesday was a snow day.

Toronto’s Chief Coroner issued a warning to men over 50 years old not to try to shovel the drifts of snow. “The strain of moving the drifts is terrific on the heart. It is better to get some young fellow to do it even if it costs a few cents.” Ambulance service was all but shutdown, the operators being unable to get the ambulances out of the garage and maternity cases were being advised to call their doctors to their homes instead. By noon that Tuesday, nine deaths had been reported and authorities attended the victims on foot.

On Tuesday afternoon a streetcar accident killed one at Queen and Mutual when the car tipped off the rails and 43 others were injured when the car reached an open switch. Another 170 passengers were trapped inside the car until they could be rescued. It was believed that a king-pin between the trucks and the body snapped. David Quinn, aged 35, a well-known soccer player and a foreman at Acton Tool, died when he was pinned under the wreckage.

On Wednesday, the city slowly began to recover. By then, there were 13 known dead with 100 more injured and there were 22 inches of snow on the ground.

Streetcars were running, trains were back in operation and it was hoped that flights might resume that afternoon and that highway buses could return to the road the following day. Although it had been feared that the blizzard might result in shortages of food, milk was once again coming into the city and bread, meat and fruits were being delivered by whatever means could be found although with side streets blocked, only retailers on the main roads could expect deliveries. Taxis would be allowed on the roads for emergency trips although with city side streets impassable, passengers would have to walk through the drifts to the main roads. Schools, closed for a second day, were scheduled to reopen on Thursday. Burials in city cemeteries, cancelled since Tuesday would resume on Thursday although Red Cross blood donor clinics would remain closed until Monday.

Massey-Harris would resume production at their King Street works with the 4 p.m. shift. The Small Arms factory at Longbranch was once again reachable by transit and would be open. Only about half it’s employees had shown up the day before, but today John Inglis expected most would be in to work. The General Engineering plant in Scarborough had closed Tuesday but would be open by Thursday for sure and might run the afternoon shift if enough employees could make it through. Both Victory Aircraft in Malton and De Havilland plant on Dufferin would be open again on Thursday and Research Enterprises in Leaside was back up and running. Costs to clean the snow from city streets were expected to reach $100,000 and young men were urged to pitch in and push the snow from the roads onto lawns. Mail delivery in the downtown area had made it through but was reduced from five deliveries down to two but deliveries to residential areas would be delayed until the walks could be cleared.

By Thursday, the city was about half way to normal and it was announced that private vehicles could resume driving at 6 am on Friday. Schools and businesses closed since Tuesday began to reopen. Maternity wards at Toronto hospitals overflowed with mothers and babies unable to get home and expectant mothers waiting to give birth who did not want to be stranded when their time came. The death toll in Toronto from the storm was set at 16, one from an accident and the remaining 15 from over-exertion in the storm while across southern Ontario the total deaths numbered 21.

Transit service resumed but travel times were doubled or tripled as people were finally able to venture out after being snowed in. Main roads were mostly passable but residential streets remained blocked. Residents in some areas had banded together to clear a path to the main roads and officials announced that they would order three snow blowers to cut an eight-foot path through the 335 miles of side streets to allow food deliveries to resume.