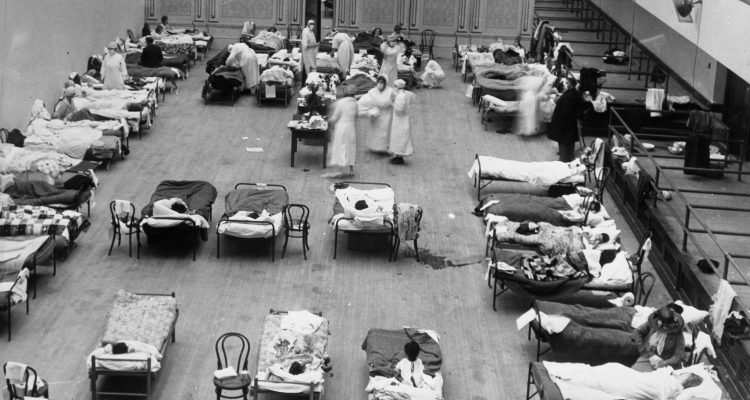 Some believe that the Spanish Influenza of 1918 had its beginnings in the Far East, perhaps China, while others have suggested that it originated in Spain or Kansas or even in France but wherever it came from, it came quietly at first, touching here and there, then retreating once again until suddenly, it was everywhere, in all corners of the world. The New Influenza killed indiscriminately and its victims were not just the very young and the very old, but shockingly young healthy adults.

It presented initially like the common cold, appearing in January and February of 1918 in Haskell County, Kansas, population 1,720. One local doctor, Dr. Loring Miner, suddenly found himself facing an influenza epidemic unlike any he had ever seen before. The influenza struck one of his patients, then another, and soon dozens. They quickly progressed to pneumonia, especially the strongest and healthiest among them. And then they began to die. And then, as quickly as it had started, the epidemic in Haskell County was over. Residents returned to work and school and life resumed. Attentions returned to the war still ranging in Europe and Miner’s warning to the national public health officials, although published in the weekly U.S. Public Health Reports, was largely ignored.

Elsewhere, unremarked except by the families who lost their loved ones, influenza began to claim its sacrifices. It killed indiscriminately and its victims were not just the very young and the very old, but shockingly young healthy adults.

Mr. and Mrs. J.M. Haley received a telegram today announcing the death of their grand daughter, Sue Ella Spangler, who died of pneumonia induced by influenza. She was six years old and passed away at her home in Paul’s Valley, Oklahoma. Her father, Dr. Spangler, had just returned from Newport News, where he had been stationed as a surgeon in the army.The Toronto Star, June 29, 1918

Mystery Grippe has many English Victims

France, Too, Suffered Much But There the Worst Seems Over

Experts Can’t Place Disease. Think Crowding in Barracks Is Cause.

…The general explanation of the delay in the German’s recommencement of their offensive is that their army is severely suffering from the influenza. I have during the past week witnessed the ravages of this influenza from the middle of France to the middle of England. The injury here is nothing compared to the number of victims among the Germans. The disease assumes various forms. The preliminary symptom is a tingling of the fingertips, followed six hours afterwards by high fever, reaching occasionally 106 degrees, and sometimes sever vomiting. Many cases recover on the second day, other take six days, with a tendency to pneumonia unless great care is exercised on the fourth and fifth days.

Both France and England had many victims, but the worst seemed to be over in the districts in France visited this week by me.

The patients have nearly all fully recovered. Experts believe the disease has been fostered by the crowding of men in barracks, but frankly confess that they are themselves unable to give any satisfactory reason for its origin.

A new outbreak began on Monday, 11 March 1918 at Camp Funston in Fort Riley, Kansas, when mess cook Private Albert Gitchell awoke with aches, fever and a sore throat. He dressed for the day but couldn’t go on and dragged himself to the infirmary. His temperature was over 103 and he was cautiously dispatched to the tent for the contagious cases. But the damage had already been done. Albert Gitchell had been serving meals to the soldiers up until he fell ill and had already spread the disease. One by one and then by the score, soldiers came to the infirmary until by mid-day there were 107 cases. By week’s end, there were 522 and by the end of April there were 1127 cases of whom 46 had died. Then, like in Haskell County, the epidemic abruptly came to an end.

In May, an outbreak of influenza flared up in Spain.

SPAIN’S EPIDEMIC. “HUNDREDS OF THOUSANDS” OF CASES. Madrid, May 31.

The influenza epidemic is still on the increase, and hundreds thousands people have bean attacked at Madrid. All the telegraph offices here, except the central bureau, are closed for want of staff. The theatre directors have decided to close down. More then two hundred doctors are ill. The King improving. The Infants Isabella Bourbon has also become a victim of the epidemic since yesterday.—ExchangeBirmingham Daily Post - Saturday 01 June 1918

At the beginning of July, officials in Monmouthshire, Wales, concerned about the high number of influenza cases in the mining districts, announced that they would be closing the schools there.

In the convent of St. Vincent de Paul in Birmingham, thirteen year old Eleanor Frances O’Donoghue came down with the influenza on a Friday evening and died early Saturday. Before the weekend was over, 62 more children at the convent were complaining of sickness and headache.

In Normanton, West Yorkshire, a miner named Joseph Meek suffering from influenza attempted to end his own life by taking a quantity of carbolic disinfectant.

Cases were reported in Amsterdam.

Amsterdam. Saturday.—A Neuremberg message reports an outbreak there of the epidemic which recently appeared Spain. Apparently it is influenza.

By August, the outbreak in Britain seemed to be abating, but new cases of influenza began to appear around the world in Freetown, Sierra Leone, Brest, France and Boston, Massachusetts and with each new case, the virulence of the influenza cases seemed to be increasing.

It spread to Scotland.

INFLUENZA’S TOLL. 102 DEATHS LAST WEEK IN SCOTLAND. According to the weekly statement issued by the Registrar-General, the deaths from influenza last week in the sixteen principal towns Scotland numbered 24, while in 78 deaths classified as due other diseases, influenza was a contributory cause. In the previous week the numbers were 19 and 79 respectively. far can be ascertained, cases influenza in Glasgow are not the increase. The epidemic, however, still claims its victims. The number of deaths last week was 53, decrease of nine from the week previous. Of the 53, 25 resulted directly from influenza, and from pneumonia.

It spread to Australia.

Influenza is raging at Broken Hill. There are hundreds of cases and the chemists are doing a roaring trade.

In early September, a camp doctor from Camp Devens near Boston wrote to his physician friend, describing the scene as the epidemic began in earnest:

Camp Devens is near Boston, and has about 50,000 men, or did have before this epidemic broke loose. It also has the base hospital for the Division of the Northeast. This epidemic started about four weeks ago, and has developed so rapidly that the camp is demoralized and all ordinary work is held up till it has passed. All assemblages of soldiers taboo. These men start with what appears to be an attack of la grippe or influenza, and when brought to the hospital they very rapidly develop the most viscous type of pneumonia that has ever been seen. Two hours after admission they have the mahogany spots over the cheek bones, and a few hours later you can begin to see the cyanosis extending from their ears and spreading all over the face, until it is hard to distinguish the coloured men from the white. It is only a matter of a few hours then until death comes, and it is simply a struggle for air until they suffocate. It is horrible. One can stand it to see one, two or twenty men die, but to see these poor devils dropping like flies sort of gets on your nerves. We have been averaging about 100 deaths per day, and still keeping it up. There is no doubt in my mind that there is a new mixed infection here, but what I don’t know. My total time is taken up hunting rales, rales dry or moist, sibilant or crepitant or any other of the hundred things that one may find in the chest, they all mean but one thing here — pneumonia — and that means in about all cases death.PBS

On the 27th of September, the influenza had become a reportable disease in the United States although by then, there were so many cases everywhere that cities struggled to keep accurate records.

In Boston, there were 20,000 cases with new cases being reported hourly and at least 720 dead. Dr. Eugene Kelly, the State Health Commissioner for Massachusetts sent out an appeal for 500 doctors and 1,000 nurses to staff the temporary hospitals that were to be opened throughout the state.

In Toronto, Canada, influenza began to appear among the military.

Over 200 Cases of Flu and One Death Here

Patients in General Hospital Being Isolated and RAF Camps are Quarantined

Dreaded Spanish Influenza which has been raging in the United States for the past month has struck Toronto.

Two hundred cases have been detected among the men of the Royal Air Force. Tree cases now in the Toronto General Hospital and one girl named Robertson of No 166 Inglewood Crescent has died of the disease. The latter is the only death known to have occurred in the city.

Beds are in Great Demand at the Military Base Hospital

There are now 500 cases of influenza concentrated at the Base Hospital and beds are in active demand. Speaking to The Star at noon today, Col E. B. Hardy, DSO, the office commanding, stated that while there was a very real epidemic of influenza it was of a mild type.

“A few have developed a little congestion of the lungs,” Col. Hardy told The Star, “but there have been no serious cases reported so far.”

Beds are in corridors, and wherever they can be located. The total population at the Gerrard street institution this day numbers over 900.

More cases appeared in Richmond, Virginia and the number was expected to climb. Still the newspaper reports tried to minimize the risks saying that there was little danger in the malady.

SPANISH INFLUENZA ON THE RAND.

Capetown, Friday – A report from Johannesburg states that the outbreak of Spanish influenza is spreading to the mines, affecting mining operations. During September it is estimated there were over 10,000 cases, mostly natives. So far only one death has been reported.Maryborough Chronicle, Wide Bay and Burnett Advertiser, Tuesday, October 1, 1918

Then finally, in early November, the war was officially over and even as the crowds took to the streets everywhere to celebrate, they spread the influenza further. Soldiers, coming home from Europe on crowded troop transports brought the influenza with them.

Throughout the rest of 1918 and well into 1919, the influenza continued to reappear, seemingly unrelenting in its pursuit of victims.

Deaths from influenza increased at an alarming rate last week, according to the official figures issued today. The total number of deaths from this cause in 96 great towns in England and Wales was 2,066 as compared with 1,362 in the preceding week. The number of deaths in Greater London was 934, as against 906 the previous week.Globe and Mail, 27 February 1919

Meaford and vicinity has many cases, few serious but doctors overworked.

Spanish influenza has broken out afresh in Meaford and surrounding country. Almost every house as a patient or two, and in some instances whole families are prostrated. One of the local physicians reports that he was called to attend sixteen new cases in one day. The result is that the doctors are overworked and in some case are unable to keep up with the constant demand for their services. While there are a great number of cases very few of them are thought to be serious and all are hoping for the abatement of the disease before long.Globe and Mail, 26 February 1919

And then finally, the number of new cases began to recede and fears that the influenza would return the following year were unfounded. The Spanish influenza had run its course.

In its wake, the pandemic would leave about twenty million dead across the world. In America alone, about 675,000 people in a population of 105 million would die from the disease.

America’s Forgotten Pandemic: The Influenza of 1918