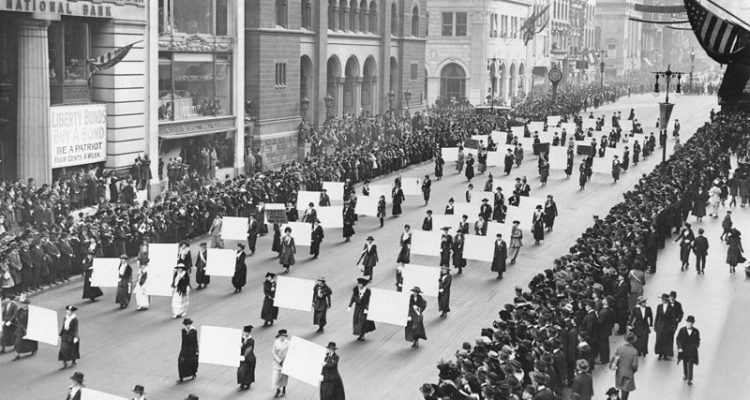 Born to a Quaker family on 15 February 1820 in Adams, Massachusetts, Susan Brownell Anthony was a teacher, an abolitionist, a believer in the temperance movement and is remembered as one of history’s staunchest activists for the Women’s Right to Vote.

Both Anthony’s brothers Daniel and Merritt were anti-slavery activists in Kansas, and even at the age of 17, Susan collected anti-slavery petitions for the cause. The Anthony family farm was a frequent meeting place for the abolitionists and Susan B. became very involved in the cause. In 1851, at an anti-slavery conference, she met Elizabeth Cady Stanton with whom she would go on to establish the Women’s New York State Temperance Society.

At the annual meeting of the New York State Temperance Society in Syracuse, the members refused to hear from the women attendees. When Susan B. Anthony of Rochester rose to speak, she was silenced. In response, Anthony, along with other women from the temperance society decided to form their own society and issued the following appeal:

An Appeal to the Women of the State of New York: By the President of the Women’s New York State Temperance Society.

Some of the women of this State met in Convention at Rochester on the 20th of April 1852, to consult each other as to what Woman might do in the present crisis of the Temperance movement. The subject was fully discussed throughout the greater part of two days, and we then decided to form ourselves into a State Temperance Society, admitting all members on paying the sum of fifty cents. We thought it unwise to receive men as equals, eligible to any of the offices of our Society, inasmuch as we wished, in starting, to have the funds, lectures and doctrines to be preached under the control and at the suggestions of Women, and throw on her the whole responsibility of action.

Man has so much intrigue and worldly wisdom, and the best of them do so continually sacrifice principle to expediency, that we had great fears in taking him as a counselor on any moral question. We are happy to say that many excellent men came forward on that occasion, gave us their names and fees, and seemed quite willing to be excused from all the labors and honors of our organization….

The appeal finished with the challenge:

Let the Women of the Empire State talk no more of Man’s indifference to the Temperance question, so long as they, having the power to settle it themselves, do from an ignoble indolence and servile reverence for custom, refuse to come forth now, and read the death doom of this monster evil. 1Anti-slavery bugle. volume, July 10, 1852

Although the Women’s New York State Temperance Society was successful in collecting more than 28,000 signatures on a petition to limit the sale of liquor, the State Legislature rejected the petition because most of the signatures were from women and children. Seeing that women needed the vote before men would listen, Anthony became an advocate for women’s rights. When she and Stanton were criticized for championing equal rights for women, she resigned from the temperance movement.

I declare to you that woman must not depend upon the protection of a man, but must be taught to protect herself, and there I take my stand. Susan B. Anthony

Susan B. Anthony attended the Woman’s Rights Convention in Syracuse, New York on Friday, September 10, 1852 where she spoke publicly about women’s rights for the first time. One of the spectators, a minister by the name of Rev. Hatch, offended the assembly by using biblical references to keep women subordinate to men and was silenced by Lucretia Mott, the president of the conference, but not before Susan B. Anthony spoke out against his comments.

In response to the Rev. Mr. Hatch’s comment of ‘If women run with the footmen, they must expect the consequences – if they run against horses they must expect to be betted on.’, Susan B. Anthony, her face pale with rage, her lip curled into intense bitterness, 2The daily dispatch., September 16, 1852, Richmond, VA responded, ‘Then the intellectual men who come here are horses.’

From then on, Susan B. Anthony took up the fight for women’s rights, starting petitions that seeked to change the laws and give women the right to own property and to vote. Still a passionate abolitionist, in 1856, she began working as an agent for the American Anti-Slavery Society, a cause she supported until the civil war. After the war, Elizabeth Stanton and Susan B. Anthony established the American Equal Rights Association in 1866, lobbying for the same rights for all citizens, regardless of sex or race.

In 1868, Anthony and Stanton created and produced The Revolution, a weekly newspaper that promoted the rights of women. The paper would continue publication until February 1872. Susan B. Anthony was the business manager for the paper and Elizabeth Stanton was co-editor along with Parker Pillsbury, an American minister who was also an abolitionist and a supporter of women’s rights.

The National Woman Suffrage Association was formed by Anthony and Stanton in 1869 and the two gave speeches around the country to promote their cause, trying to convince others of the woman’s right to vote. In an act of defiance, Anthony, along with fifteen other women cast their votes in the 1872 Presidential election. Warrants were issued and Anthony retained Hon. Henry R. Selden to defend her. Bail of $500 was set for each of the women and the case was scheduled to appear before the United States court in Albany on the third Tuesday in January 1873. Finally in June, Susan B. Anthony was found guilty of illegal voting. At the conclusion of the very public trial, the court asked Miss Anthony if she had anything to say before her sentence was pronounced.

Seizing the opportunity, Anthony answered that she had a great many things to say and went on to insist that every principal of justice had been violated during her trial and that her rights had been denied. She had not had a trial by her peers and she was determined to continue to fight for equality. When the court interrupted her speech, she concluded by saying that she demanded the full rigor of the law.

Judge Hunt then fined her $100 and ordered her to pay the costs of the prosecution. She never paid the fine.

The publication, History of Woman Suffrage, was conceived in 1876 by Susan B. Anthony and other members of the National Woman Suffrage Association. The first volume appeared in 1881, detailing the early years of the movement and was followed by a second volume in 1882 that detailed the suffrage movement from 1861 to 1876, focusing on the social role of women during the civil war. Volume three, released in 1887 summarized the laws that had given women some of the rights they sought including the enfranchisement of women in Wyoming territory. Volume four was released in 1902 and the final releases, volume five and volume six, were released after Anthony’s death in 1922.

Even into her eighties, Susan B. Anthony continued to fight for women’s suffrage, meeting with President Theodore Roosevelt in Washington DC to lobby for the right to vote in 1905.

Anthony did not live to see the realization of her life’s work. It wasn’t until fourteen years after her death that the 19th Amendment to the US Constitution was passed, finally giving all adult women the right to vote.

Susan B. Anthony dedicated her life to the fight for social justice. She left her effects to her sister, various nieces and nephews and to her good friend Rachel Foster Avery. Not surprisingly, her executors were all women.

To the Surrogate’s Court of the County of Monroe, in the State of New York.

The Petition of Mary S. Anthony of Rochester, NY, Lucy E. Anthony and Anna H. Shaw, of Philadelphia, respectfully shows:
That Susan B. Anthony died on the 13th day of March, 1906, at Rochester in the County of Monroe, and State of New York, leaving real and personal property within said county.

and leaving a will of real and personal property, bearing date the 4th day of January 1904, executed in presence of Iram B. Butler, and Carrie M. Bahl, as witnesses, as prescribed by the laws of the State of New York, in which Will, Mary S. Anthony, Lucy E. Anthony, Anna H. Shaw, and Rachel Roster Avery are designated as Executors.

That the said testator left her surviving no husband, and that the following are all the heirs and all the next of kin of said testator, and their respective ages and places of residence, to wit:

That no petition for probate of said Will has been filed in any Surrogate’s Court.

Your petitioners therefore pray that the said Will may be proved, and that the said heirs and next of kin of the said testator may be cited to attend the probate thereof.