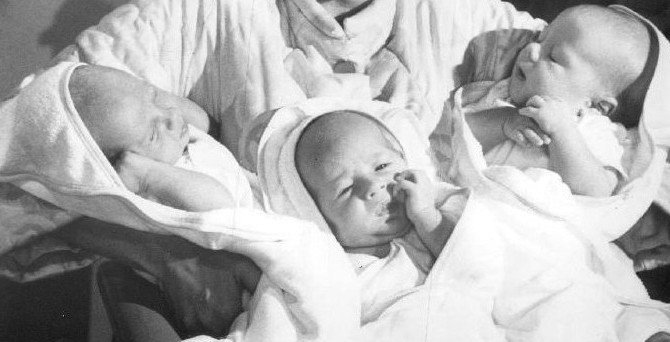 The British custom of a Royal donation, that came to be known as the “Queen’s Bounty”, was given to mothers who gave birth to three or more babies at one time. Queen Victoria is said to have initiated the grants ‘to enable the parents to meet sudden expenses thrown on them‘ when triplets or quadruplets were born after she and the Prince learned of a poor woman who had recently given birth to triplets while on a visit to Ireland in about 1849. To qualify for the donation, the babies had to born alive and their parents had to be married and British subjects. After Queen Victoria’s death when her son Edward became King of the United Kingdom, the grants were continued as the King’s Bounty.

Childbirth in the nineteenth century was dangerous, both for the mother and the child, and when nature gave parents multiple children at one birth, it was quite uncommon for all to survive as the research into the Queen’s Bounty has revealed.

In Tradeston, on 29 September 1854, James Scott, builder of William Street in Tradeston and his wife had three daughters adding to their already large family for a total of eleven children. When her husband was unable to work due to inclement weather, Mrs. Scott wrote to Queen Victoria, begging for assistance. The Queen, after investigating the truth of the claim, sent £5 to the family. Afterwards, some Glasgow gentlemen donated an additional £2 and a wagon of coals to the family.

LIBERALITY OF THE QUEEN.-In September of last year as the wife of a mason, named James Scott, residing in Tradeston, Glasgow, was safely delivered of triplets – all girls – which addition to an already numerous family of eight, straightening still more their hitherto indigent circumstances, were further augmented by the husband being prevented from working owing to the inclemency of the weather. In this condition Mrs Scott penned a letter to the Queen detailing her case, and craving for assistance. Her Majesty, a short time since, caused inquiries to be made as to the truth of the woman’s story, which having been confirmed, after due investigation, by the Inspector of Govan parish, the Queen has forwarded £5 for behoof of the family. Caledonian Mercury - Thursday 01 February 1855

In a sad ending to the happy story, it would seem as though the three children were carried off by smallpox a few years later.

A Warning.—About a year ago the sympathies of the inhabitants of Govan village were drawn to one of those ” triplet” births which usually create much interest in their neighbourhood. The mother, being the wife of a labouring man, refused to have any of her three infants vaccinated, on the plea that she could not afford the trouble. The melancholy effect is that the whole three were recently cut off by smallpox, affording a warning to other parents not to neglect the great boon of vaccination.Dundee, Perth, and Cupar Advertiser - Tuesday 23 November 1858

On 6 October 1858 in Ruthwell parish, Richard Bell and his wife Ann Johnston had triplet daughters whom they had christened on the same day. The girls were named Catherine, Margaret Swan and Sarah Jane Bell.

Another Gracious Act of Queen Victoria.— On the 6th of this month, Mrs Richard Bell, residing Burnside, in the parish Ruthwell, was safely delivered of three children—all girls. They are all living, and the mother is doing well. It is also worth recording that in this family of ten children, while thus the three youngest are triplets, the two eldest are twins, a boy and girl. Information having been communicated to her Majesty Queen Victoria of this birth of three children, she has been graciously pleased, through Colonel Phipps, to send Mrs Bell a donation of three pounds, one for each child. Such acts of condescension and kindness the part of the Sovereign are well fitted to strengthen those feelings of attachment to her Majesty’s person and throne which are cherished warmly by the humbler as by the more comfortable classes of her Majesty’s subjects.Dumfries and Galloway Standard - Wednesday 27 October 1858

George Spicer’s wife gave birth to four children on 28 October 1889 and his wife, along with three of the children, died that same evening, leaving him with ten children to look after. Spicer’s employer, G. P. Piper, for whom he had worked for over 20 years, set up a subscription in the parish for him, to help lessen the burden. Spicer was known to be a teetotaller and a most deserving man.

THE QUEEN’S BOUNTY. The Queen has seat £5 to man named George Spicer, labourer, at Great Hormead, Hertfordshire, whose wife gave birth to four children recently. The mother three children have died, and the husband is left with ten children, the oldest of whom ie only fifteen years of age.Cheltenham Chronicle - Saturday 23 November 1889

James and Alice Turner of New North Road in Rastrick, Yorkshire had triplets in late August 1893. Unfortunately the three girls, Edith, Ethel and Florence all died shortly after birth. The couple had previously had two sets of twins: Elise Ann and Ernest James were born in 1887 and Alice and Minnie were born in 1889.

A CANDIDATE FOR THE QUEEN’S BOUNTY. NINE CHILDREN AT FOUR BIRTHS. A notable case of excessive fecundity has occurred Rastrick, near Halifax woman named Turner, wife of factory operative, has this week given birth to triplets, two of which are doing well, but the third died shortly after birth. Three previous occasions Mrs. Turner has had twins. All three children this last occasion were females.Sheffield Evening Telegraph - Friday 01 September 1893

On 10 April 1893, Peter and Elizabeth Brierley of Oak Street had triplets in Pendlebury, Lancashire. Two of the babies were boys and were named Henry and John and the third child, a girl, was named Annie.

QUADRUPLETS AND TRIPLETS Monday the wife working man, named Abraham Asliworth, of Market-street, New Mills, was safely delivered four children, two of each sex. One child was dead, but the other children and the mother are doing well. The wife of Peter Brierley, carter, Pendlebury, Monday gave birth to three children, two sons and a daughter. Both mother and infants are doing well. Application is to be made for the Queen’s bounty. Derby Daily Telegraph - Tuesday 11 April 1893

Sadly, John Brierley died at eight days old and was buried on 20 April 1893 but the family still received £2 from the Queen.

The Queen’s Bounty.—Replying to a Pendlebury application for the Queen’s bounty on behalf of Mrs. Brierley, a carter’s wife, who recently gave birth three children, General Sir Henry Ponsonby states that cases are only eligible for the £3 donation from the Queen where the three children survive. One of the Brierleys’ children had since died. command of her Majesty, however, Sir Henry forwards a charitable donation to Mrs. Brierley of £2. Manchester Courier and Lancashire General Advertiser - Saturday 06 May 1893

Henry Brierley did not survive either and died at the age of six months and was buried on 14 October 1893.

QUEEN’S BOUNTY WANTED. On Saturday Mrs. Hannah Davies, wife of labourer, living near Cardigan, gave birth to four children, three girls and a boy. All are doing we’ll. Mrs. Davies, who is young woman, had previous occasion been delivered of twins, and she is now the mother twelve.Portsmouth Evening News - Monday 12 June 1893

In 1899, a Ryhope couple John George Dixon and Agnes Annie Dixon of Smith street, the proud parents of four children took action against the doctor who delivered their babies for photographing them and selling the photographs for profit.

FOUR AT A BIRTH. THE BABIES PHOTOGRAPH. ACTION AGAINST A RYHOPE DOCTOR. At the Sunderland County Court yesterday before His Honour Judge Meynell, John George Dixon, draper’s assistant, and his wife, Agnes Annie Dixon, of Smith street, Ryhope, sued Dr. De Wytt, of Ryhope, for the delivery of six photographs, or in default £15, together with £5 for the risk, annoyance, and trouble that they had been put to by the defendant. The female plaintiff stated that on May 31 last she was delivered of four children, three girls and a boy, and was attended by the defendant. Defendant told her it was a very remarkable case; that the like had never s happened in Ryhope before, and that in all probability would never happen again. He told her that the children would not live, in and that she had better have them photographed before they were dead. He said that it would be the only thing they would have to remember them by, and that unless she had a photograph no one would ever believe she ever had them. In consequence of his persuasions she agreed to let a photographer come into her bedroom to take her and the four babies. The latter were placed in an arm-chair and on the table. Next day defendant returned and told her that the photograph was smudged, and that she had better have them taken again. Witness agreed on the understanding that the defendant would supply her with half a dozen copies. To this defendant agreed, and the photographer was admitted a second time. She felt the strain and soon after went into delirium. Not long afterwards they heard that copies of the photographs were being shown in the village. Witness’s husband immediately asked the defendant when they were going to get theirs. Defendant said he was very sorry, but the photographer had broken the negative, and he therefore could not fulfil his promise. The male plaintiff corroborated. He denied that he ever wanted to enter into an arrangement with the photographer to supply him with a large number of photographs for purposes of sale. A lot of his friends wanted a photograph, and not being able to afford to give them one, he agreed to get them one upon payment. Dr. De Wytt admitted having arranged to photograph the children, but he denied having promised the plaintiff half a dozen photographs. He got to know that plaintiff wanted to sell the photographs, and he at once put a stop to it. He regarded the sale of the photographs as reflecting upon his professional conduct. He got the Queen’s Bounty for the children. In cross examination, witness said that the negatives were not destroyed, but that they were in his possession. His Honour found for the plaintiffs for £6 6s, to be reduced to 1s if the photographs were delivered within seven days. Plaintiffs’ solicitor (Mr Bolton) asked for the delivery of the photographs without any alternative being given to the defendant. His Honour said that he saw no reason why the plaintiffs should not have the photographs, and he would therefore find for them for £15, or the delivery of six photographs within 14 days.Northern Echo - Thursday 17 August 1899

The Royal Bounty for multiple births continued until 1957, after which parents only received a congratulatory letter from the monarch. Congratulatory messages were abandoned completely in February of 1995.