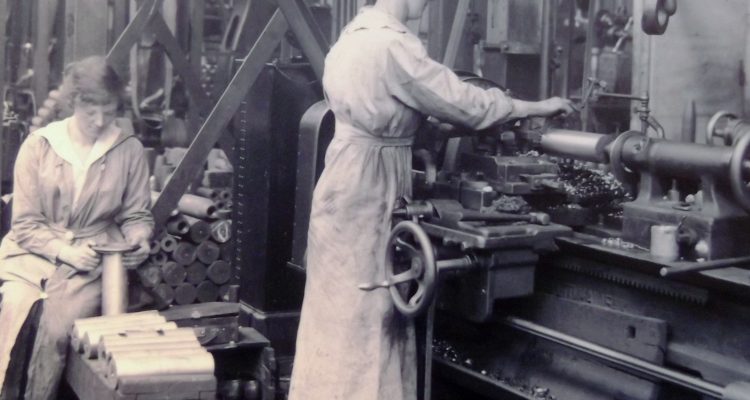 The Women Went to Work

While there is no doubt in my mind that our earliest female ancestors worked, and worked very hard, their choices for paid employment were few. Young women of the working class mostly went into service, working as domestic servants or farm servants. Widowed women with a family to support, might have taken in laundry, worked at dressmaking, hat making or ran boarding houses. But as the industrial revolution of the late eighteenth and early nineteenth centuries swept across the world and changed everything, women began working in new occupations.

They worked in the textile mills and other factories, often for long grueling hours for very little pay. Some women even worked in the mines, until labour laws were passed to prohibit women or children from working underground. But by the turn of the century, incomes had increased relative to the cost of living, and for most families, the woman’s place was in the home.

The wife took care of the children, she attended to the domestic chores and she did whatever was necessary to ensure that her husband was happy and well cared for.

Then on 28 July 1914, the unthinkable happened. Austria-Hungary declared war on Serbia.

On 1 August, the German government ordered their troops to mobilize and declared war on Russia.

Germany declared war on Belgium and their troops crossed the border to attack Liège.

Suddenly, the world was at war.

In Britain and throughout the British Empire, men began enlisting, wanting to do their duty and protect their families and their country from the enemy. Britain, with an Army of only 400,000 regular soldiers, half of whom were posted overseas when war broke out, needed recruits quickly and within a month over 225,000 men had joined up. Throughout 1914 and into 1915, men continued to enlist but when numbers began to dwindle after the horrific losses in the Battle of the Somme, Britain began conscripting in January 1916. At first, conscription applied only to single men, but by May and June conscription extended to all men, regardless of marital status.

Farmers and postmen, factory workers and grocers, trolley-drivers and policemen; men enlisted and left for the front.

The women left behind began filling the jobs that were once only for men.

For the first time, women served as police officers, forming ‘Women’s Patrols’, walking the beat on the streets of Britain, ensuring that civil order was maintained.

Although a small group of volunteers had been formed to patrol London as early as 1914, Edith Smith was the first police constable to have the full power of arrest. She was hired in August of 1915 in Grantham primarily to deal with problems involving women and the 14,000 soldiers billeted in the area. In an interview with the Chief Constable of Grantham in 1917, Edith Smith said that she handled all cases of female prisoners and children, both in the cells and in court and whenever an investigation involved them. She told him that the fact that she was a trained nurse gave the women that she dealt with confidence. Her hours were long and there was no stated beat, but otherwise her duties were the same as any other constable.

Edith Smith worked long hours for two years but left the force in 1918, committing suicide by taking an overdose of morphia in 1924.

At the outset of the war, there were some 9,000 women working for the railways but as men left for the front, leaving their positions vacant, women stepped in to fill the gap. The trains had to keep moving, taking soldiers to wherever they needed to go.

WOMEN RAILWAY PORTERS AT MIDDLESBROUGH. In consequence of a number of porters the Middlesbrough passenger railway station having joined the colours, four women porters have been engaged and will commence their duties to-day (Monday). Newcastle Journal - Monday 21 June 1915

The idea of women lifting heavy cases was shocking to many and as the first women were hired, it made the news.

WOMEN RAILWAY PORTERS The war is producing many phenomena. We have the women police, the women car conductors, and the women van drivers, and now another has appeared in the form of the women railway porters. They are employed ah the Marylebone Station the Great Central Railway and are filling the places of men who have gone on military service. The innovation does not seem to resented in any way by the male workers, and the women are showing a marked aptitude for this labour. I understand that the railway management are very satisfied with the result of the experiment which has brought relief to a very awkward situation. The women, too. are well satisfied, and already they are quite au fait with their duties —even to the taking of tips. Daily Record - Thursday 08 April 1915

With the men away, it was the women who worked in the factories manufacturing explosives for the war. Edith Staley, aged 27, of Golcar in Yorkshire began working in one of the chemical factories in March of 1916. After four weeks of employment in the TNT department, Staley became ill and was off work a fortnight and was attended by the firm’s doctor. On her recovery, she returned to the same department but was ill again a week before Whitsuntide. This time, on her return, she went to work in the benzol and toluol department and her health improved.

With the men away, it was the women who worked in the factories manufacturing explosives for the war. Edith Staley, aged 27, of Golcar in Yorkshire began working in one of the chemical factories in March of 1916. After four weeks of employment in the TNT department, Staley became ill and was off work a fortnight and was attended by the firm’s doctor. On her recovery, she returned to the same department but was ill again a week before Whitsuntide. This time, on her return, she went to work in the benzol and toluol department and her health improved.

Then, on December 23, a coworker dropped a spanner from a platform above her. The spanner struck her on the head and she collapsed. The company doctor attended her and treated the injury with iodine, saying she had sustained a minor concussion. Feeling very ill over the holiday, she visited her family doctor on Boxing Day and he diagnosed toxic jaundice, a side effect of working with TNT. She grew steadily worse and by January 11 had lost consciousness. She was transferred to the infirmary but died on Saturday, 14 January 1917 without ever regaining consciousness.

At the inquest into Edith Staley’s death, the jury heard testimony from both doctors, Staley’s husband and some coworkers at the chemical factory. After only fifteen minutes consideration, they returned a verdict of Accidental Death from TNT poisoning, accelerated by the blow on the head.

Not all of the women who worked with TNT died from poisoning but all became tainted from the chemicals, their skin breaking out in hives and turning yellow. The yellow glow of their skin earned them the nickname ‘Canary Girls’. Those who subsequently became pregnant gave birth to ‘Canary Babies’, born yellow, although the colour faded after a time.

After the war, the men who made it through came home, expecting to pick up where they left off. Some 750,000 women were made redundant when the men came home.

POCKET MONEY WORKERS After War Problem of Women Who Are in Men’s Places. The problem what is known as the woman pocket-money worker will prove very acute when peace arrives, remarked an official the Women’s Industrial Council yesterday to The Daily Mirror. With the object of finding some solution, the council intend to hold a conference in October. At first we propose to consider the thousands of office workers who have become fascinated with a good allowance of pocket-money, so that when the war is over they will seek remain at their posts.Daily Mirror - Thursday 20 September 1917

The lucky women whose husbands had survived, returned to their domestic pursuits, some with no regrets, and others just a little wistful to be leaving their jobs behind.  The war, however, had made a widow out of many, and those women had no choice but to carry on, earning a living to support themselves and their families in whatever way they could.