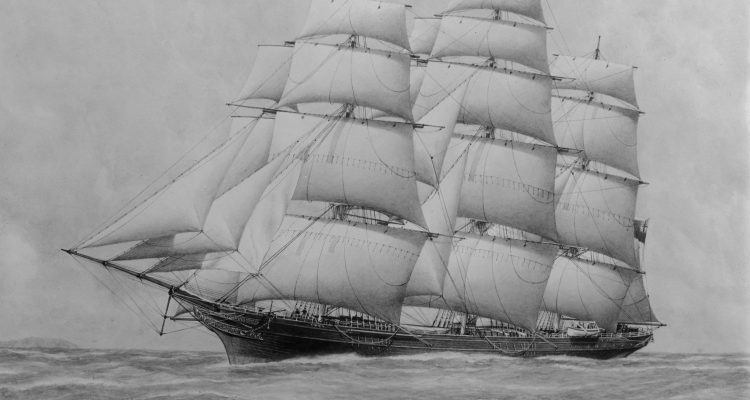 In July of 1851, Victoria’s first gold rush began and before the end of the year, gold fever had spread across Australia and beyond. Workers on Victoria’s sheep farms, lured by tales of gold, abandoned their posts and went in search of their fortunes. In an effort to fill the resulting labour shortage, Britain’s Emigration Commission was sponsoring emigrant families from Scotland, Ireland and England who wanted to seize the opportunity to become farm workers in Australia.

The amount expended out of the public funds for the conveyance of emigrants was, up to the end of 1851, about 800,000/., of which about 4,500/. was derived from Parliamentary votes for sending out free emigrants to those colonies which have received convicts, and 102,000/. obtained from the emigrants themselves. The remaining sum of about 653,000/. was furnished from the land revenues of New South Wales and South Australia, or the general revenue of the Cape of Good Hope.

The Colonial Land and Emigration Commission was established by a Commission from Queen Victoria on 14 January 1840. Emigration from all parts of the United Kingdom had grown rapidly in the mid-nineteenth century. In fact, 2,640,848 people had emigrated between 1847 and 1851 compared to 1,218,176 in all the years prior to 1847 and in 1852, numbers were expected to exceed 500,000 persons.1Coleraine Chronicle, Saturday 07 August 1852 The Commission was responsible for the management of land sales in the colonies of Britain. They prepared emigration schemes, chose emigrants who would receive free or assisted passages, chartered ships and ensured the safety of the emigrants by regulating conditions on the ships and appointing surgeons and matrons to accompany each voyage.

In June of 1852, the Government Emigration Commissioners chartered the American clipper ship, the Ticonderoga, to take emigrants to Australia. Registered at 1100 tons to the Black Star line, the Ticonderoga was to be captained by Thomas Boyle. As an American ship, she carried 48 crew members, well short of the British legal requirement of six crew to every 100 tons. It was rumoured that the American Ticonderoga was chosen because her owners had underbid British owners.

Government and the Shipowners – Within the last few days the Ticonderoga, an American vessel of 1,100 tons register, has been chartered by the Government Emigration Commissioners to take out emigrants to Australia from this port. Some persons assert that this employment of a foreign vessel was an act of necessity, resulting from the scarcity of suitable British ships; others state that a preference was given to the Ticonderoga because her owners accepted rather lower sum per head for the emigrants than a British owner would take.

On 4 August, 1852, the Ticonderoga left Liverpool, bound for Melbourne, Australia with 814 emigrants on board, most of them Scottish farm workers and shepherds.

Tragically, less than a week into the voyage, disease broke out aboard the ship and by 12 August, the first passenger died. In the weeks that followed, more and more passengers became ill, due at least in part, to poor ventilation, overcrowding and increasingly unsanitary conditions. The surgeon superintendent, Dr J C Sanger, and his assistant surgeon, Dr James William Henry Veitch soon began running out of medical supplies. More passengers died.

After ninety hellish days at sea, the Ticonderoga limped into Hobson’s Bay flying the yellow flag of quarantine.

“The Argus ‘ of November 5, 1852, reported that when the vessel arrived. all provisions, medicine and medical comforts had been consumed, and that the Government immediately sent the schooner Empire and the harbour master (Captain Ferguson) with supplies of fresh meat, live stock, vegetables, porter, wine, spirits, and medicine. Dr Taylor, of the ship Ottillia, who had had great experience with the fever, was dispatched to assist with the sick. A further report on November 9 stated that there were in all 300 patients suffering from fever.

The Government had taken over two houses belonging to Messrs Sullivan and Cannon as hospitals, and had also purchased the ship Lysander as a quarantine hulk. The sick began to improve on removal to the shore, where they were sheltered in improvised tents provided by the Government, but none the less, during the next six weeks 82 more passengers died and were buried in an improvised cemetery.

Intelligence was brought to Williamstown, on Wednesday evening last, by Captain Wylie, of the brig Champion, from Adelaide, that a large ship, named the Ticonderoga, ninety days out from Liverpool, with upwards of 900 government emigrants on board, had anchored at the Heads. A great amount of sickness had occurred among the passengers, more than a hundred deaths having taken place, and almost a similar number of cases (typhus fever) being still on board. Nor was this all. The doctor’s health was so precarious that he was not expected to survive, and the whole of the medicines, medical comforts. &c, had been consumed. The authorities in Williamstown, immediately furnished the government schooner Empire, with the necessary supplies of live stock, beef, mutton, milk, vegetables, porter, wine, spirits, and a medicine chest, and Dr. Taylor, of the Ottillia, a gentleman of much practical experience, went down in her to the Ticonderoga yesterday, to take charge, accompanied by Captain Ferguson, the Harbour Master. The Lysander, ship, has also been taken up by Government as a Quarantine Hulk, and proceeds to her destination at the Heads this day, having on board stores sufficient for all hands for three months, when further, arrangements will be made, which we trust will ameliorate the fearful state of things on board. The foregoing are the only particulars known to our reporter at present, but, at all events, this case clearly exhibits the cruelty and ill-judged policy of crowding such a number of people on board a single ship, no matter her size, for a lengthened voyage.

As the weeks of quarantine wore on, debate was waged in the Melbourne newspapers about whether or not overcrowding aboard the Ticonderoga contributed to the outbreak of disease. One anonymous letter, written to the Argus at the end of 1852 claimed that the surviving passengers appeared emaciated. He described the ship as being unclean and further charged that unconscionable haste and little care had been taken when the sick were transferred to the quarantine area from the ship. A few days later, Dr. Sanger, the Surgeon Superintendent from the Ticonderoga responded in a letter of protest to the Editor of the Argus.

Sirs–A garbled and false representation respecting the state of the ship Ticonderoga having appeared in the Argus of Friday last, written by a person who signs himself ” Observer.” I beg you  will allow me the space of a few lines to disabuse the public on that subject, more particularly as that statement unjustly reflects on the conduct of the Captain and Officers of the vessel, those gentlemen having evinced the most hearty desire for the welfare of the emigrants throughout the whole of her disastrous voyage. So far from the generality of the people being in an emaciated condition, as” Observer” seems to imply, the fact is, that out of nearly 600 only two were sent to the hospital, about  a dozen were suffering more or less from diarrhorea or debility, none severely : the rest were in perfect health. The apparently unseemly haste with  which the passengers were hurried over the side was caused by the impatience of the captain of the steamer, who would not wait a moment even to allow the husband of the mother of the seven-week’s infant to join his wife with the child.  When the people were re-embarked from the Sanitary Station on the Monday previous, the ship  was perfectly clean : but it having been necessary to take down the berths and destroy them for the purpose of thoroughly purifying the vessel, the passengers were obliged for the few days they remained on board to lie on the decks, thus causing an untidy appearance, and a difficulty of attending minutely to cleanliness. As regards the Government officials,  I can testify that the greatest pains were taken to thoroughly eradicate the disease before granting the ship pratique, and not a single case of infectious disease existed at the time the vessel left Point Nepean.–I am, Sir, Your most obt. servt, J. C. SANGER, M.D., Surgeon Superintendent ship Ticonderoga.

On the passenger manifest, the list Ticonderoga passengers who had died continued for five pages.