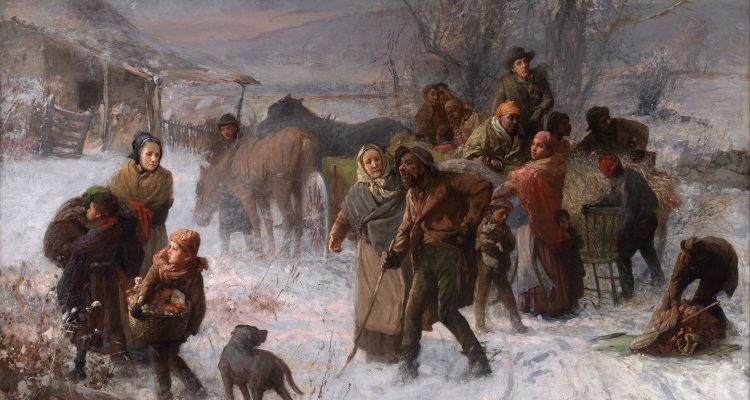 Mishap on the Underground Railroad

April in 1860 began with a cold snap in Nashville, Tennessee and there were fears that the peach crop would be ruined but by mid-April, the weather had finally warmed and it appeared that the peaches were saved. The first pony express rider reached Sacramento, California and the Democratic convention in Charleston, South Carolina found itself divided over slavery. The tensions in America between the North and South were building.

In less than a year’s time, the first seven of thirty-four US states would individually secede from the union to form the Confederate States of America and the country would be divided by civil war. Tennessee, with its population divided between Union and Southern sympathizers, would be the very last of the Southern states to secede and would later be the first to be readmitted to the Union in 1866 after the war concluded.

The Man in the Box

Nashville business owner Newton McClure was the proprietor of McClure, Buck & Co, a tin plate and sheet iron business with premises at 15 South Market Street, and the owner of five slaves, one of whom was called Alexander.

Alexander, most likely in his mid-thirties and a tinner by trade, wanted desperately to be free and made arrangements with some friends to effect an escape. The group of friends procured a shipping container and on Saturday, 14 April 1860, Alexander climbed into the box and his friends fastened down the lid. One of Alexander’s friends, a free black named Nathan James, along with Alfred Savage, a slave drayman, arrived at the Adams Express Company offices on Cherry street in Nashville with the large pine box weighing 265 pounds. They paid for the shipping charges through to Cincinnati Ohio. The freight was addressed to Margaret M Johnson and was to be sent in care of Levi Coffin, an abolitionist and active leader in the Underground Railroad.

Since time was short, the agent at Adam’s Express hurriedly dispatched the box to the depot of the Louisville and Nashville Railroad just in time for the first train to Louisville which departed at 10:30 that morning. At the same time, a letter was forwarded to Levi Coffin, alerting him to the shipment and asked him to call for the cargo at the Cincinnati office of Adam’s Express.

Meanwhile, back in Nashville, Newton McClure, had already raised an alarm when Alexander had failed to show up for work that morning. The Sheriff in Louisville was contacted and told that an escaped slave was thought to be on a train bound for his city, but it was too late. The train carrying Alexander had already cleared the Louisville station.

From Louisville, the box was rushed over to Jeffersonville and put on the train for Seymour, a fifty-mile trip. As the box was being transferred to the Cincinnati and St. Louis train in Seymour, the lid of the box was accidentally dislodged and the contents were revealed. Alexander McClure emerged, sweating and dehydrated. He had ridden in the closed-up box all the way from Nashville, spending a portion of the trip head down in the cramped box.

Alexander was, of course, arrested and put in jail in Louisville until Newton McClure could arrive, identify and claim him. Deeply disappointed, threatened and frightened for his life, he eventually implicated three men in his escape attempt. Nathan James, the free black, was arrested and found to be an escaped slave himself. For his part in the plot, he was tried and sentenced to jail.

Alfred Savage, the slave who drove the wagon, property of J.G. Moore, was given 15 lashes for his part but the third conspirator, a white man with no name, was never found.

Totally unaware of the drama that had unfolded to the south, Levi Coffin went to the station to claim the box. He was, of course, questioned intensely for his part in the escape attempt, but he maintained that he had no knowledge of what the box contained. He stated that he had merely had a letter on 11 April, telling him to pick up a shipment and that is why it had come.

Editors Commercial,—In this morning’s issue of your paper I find under the above head a caution administered to me to be careful, after informing the public that a box was forwarded from Nashville, Tennessee, by Adams Express, to my care, and all went well until the train reached Seymour, Indiana, when the box burst open, and out dropped a nigger, etc. You go on to state that yesterday morning Mr. Coffin called for the box,and the clerk questioned him closely as to its contents, but he ‘didn’t know a thing; couldn’t guess what was in it.’ Then you say: ‘Be careful, Friend Levi; thee [thou] musn’t tell fibs.’ Your caution is fully appreciated, and in return permit me to suggest to you to be careful to make no improper insinuations to lead the public to believe a fib in regard to my complicity in the matter. “About twelve o’clock on Seventh day, the 14th inst., I received through the post-office a letter, post-marked Nashville, Tennessee, dated Nashville, April u, signed Hannah M. Johnson, stating that a box would be forwarded by Adams Express to my care, and wishing me to go to the express office and take charge of it, stating that the express would arrive at half past ten o’clock, Saturday night, but did not say what the box contained. I learned that the express would not arrive till First day morning, nine o’clock. I went to the office at that time and handed the letter to the clerk or agent. He informed me that they had just got a dispatch informing them that a box marked Hannah M. Johnson, care of Levi Coffin, Cincinnati, had burst open at Seymour, Indiana, and a nigger rolled out. I informed them that I did not know Hannah M. Johnson; never heard of her before; had no knowledge of any box or anything else being shipped to my care from that direction, until I received that letter which was before them. “No questions were asked me. My statements were voluntary. They requested the letter to copy. I gave it to them with the promise that it be returned to me. They have the letter. The public is welcome to its contents. Previous to receiving this letter I have had no correspondence with any one in Tennessee for more than a year past; did not know of any person, male or female, traveling in that direction; knew nothing of the matter in any shape. “My name and address are well known in the South. It is no new thing for me to receive consignments of slaves from the South, generally gentlemen’s children to be educated; but this is the first case in a tight box, and no instructions whether they wished him sent to school or not. I am sorry that Sambo did not get through safely after suffering so long in a tight box. I would have received him kindly, though I would object to that mode of traveling as dangerous and decidedly uncomfortable. Signed Levi CoffinThe Cincinnati Commercial, of April 18,1860

Levi Coffin’s home (built in 1827) was in the small town of Newport (now Fountain City), 10 miles NW of Richmond. It was brick and two stories and had a large winding staircase. The rooms were finished in oak and walnut and each room had a wide fireplace. He took in more than 3000 runaway slaves including Eliza Harris of “Uncle Tom’s Cabin” who was nursed back to health by ‘Aunt Katy’ who was Levi Coffin’s wife before she travelled on to Canada. It was after their friend, Harriet Beecher Stowe heard about Eliza from the Coffins that she penned the famous and often controversial work in which she portrayed the Coffins as Simeon and Rachael Halliday. Shortly after helping Eliza Harris, the Coffin family moved to Cincinnati in 1847. Levi’s wife, Katherine White, was born to Quaker parents in 1803 near New Garden North Carolina and she married Levi on 28 October 1824, moving to Newport in Wayne County about 2 years later.

Levi died in 1877 and Katherine, after his death, lived in Avondale until her death in 1881.