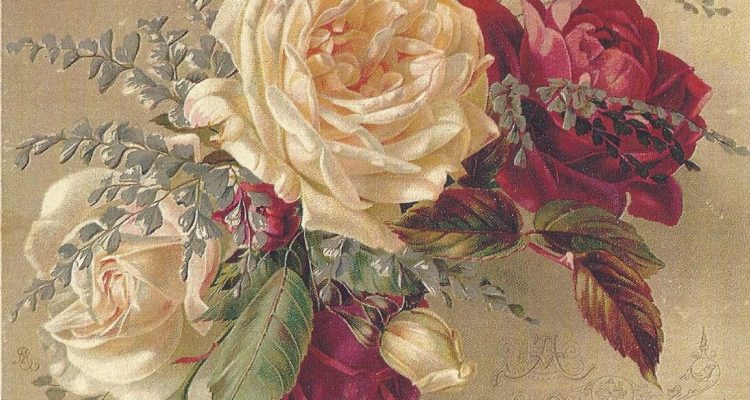 My most treasured Christmas decorations are the ones that have been passed down through the family for generations. The jolly glass clown that was gifted to my father as a baby back in 1920. The fragile bird ornaments with the tin clip that my mother loved. The delicate German glass ornaments passed to me by my great-aunt. The paper clown I cut from a book over 50 years ago to hang on our tree.

The Christmas Tree was a German tradition brought to England in the early nineteenth century by King George III’s German born wife Charlotte. Queen Victoria wrote in her journal of having a Christmas tree in her room in 1832 but it wasn’t until the 1840s that it gained wide spread popularity in Britain.

In 1845, The Illustrated London News published an account of a Christmas Eve celebration held at the Temperance Hall by the London Mission Society for about 400 children. The tree was loaded with fruits and flowers and other little presents and illuminated with many candles. During the evening celebration, the fruits and gifts were distributed to the children who received them with excitement.

Christmas trees were traditionally decorated with dried fruit, candies in wrappers, cookies, nuts, and strands of popcorn or cranberries. Small home made gifts were also popular. Decorations of tin, leather or glass would become cherished heirlooms.

Dried fruit such as apple slices, orange slices, cinnamon, cranberries, popcorn were threaded into long strands and draped around the tree as decorations.

Boughs of evergreen, pine cones, dried leaves, sprigs of holly and mistletoe were all used in decorating our ancestors’ homes.

Homemade ornaments were made of materials at hand including pine cones, straw, yarn, tin, fabric, or paper. Tinsel has its origins in Germany where it was originally made from thin strips of beaten silver.

Small gifts were often tucked amongst the Christmas tree branches at the last minute.

Fragile glass, often hand painted ornaments were passed down in families for generations. Hans Greiner of Lauscha, Germany is credited with producing the first glass ornaments in the shape of fruit and nuts in 1847. They were made using a unique hand-blown process combined with molds. The inside of the ornament was given a silver colour using mercury or lead which was later changed to silver nitrate.

Here, at the Corning Museum of Glass, a skilled glass blower demonstrates the traditional method of creating glass Christmas ornaments.

Christmas trees were often lit with real candles. These could quickly become dangerous if not tended carefully.

Panic at a Workhouse. At a Christmas tree entertainment at Chester Workhouse last night a panic was created by an alarm of fire. A lighted candle fell from the tree, and ignited the toys and wool. The children ran out screaming. Beyond the loss of the toys and the partial burning of the tree no damage was done.

The newspapers in the latter half of the nineteenth century were full of tragic tales of fires started by candles on a Christmas tree.

There was a handsome Christmas tree, over which Mr Deane, the son of the well known Dublin architect, Mr M Deane, officiated, being attired in the costume of Father Christmas, which was composed of light material, chiefly cotton wool. Suddenly, when standing near the tree, his costume caught fire from candle, and he was quickly enveloped flames. His wife, to whom was only recently married, rushed his assistance, and, unfortunately, her clothes also became ignited. Mr Macready, Jr. with great presence of mind, then rushed to the billiard table, and. tearing the cloth from it threw it over Mr and Mrs Deane and succeeded in reducing the flames, not however, before he also was burnt.

Because of some quick thinking, all of the parties burned during the above incident were expected to recover but there were many reports of people being seriously injured or even killed after having their clothing set alight from the flame of a candle on a Christmas tree.

In 1882, Edward Johnson, who was a colleague of Thomas Edison, hand-strung 80 red, white and blue lights for his tree. By the early twentieth century, as the homes of the more well-to-do were fitted with electricity, the first commercially available Christmas tree lights were sold.