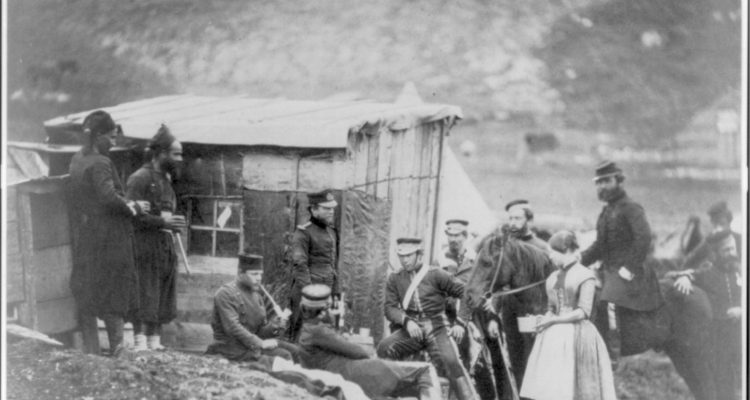 Women and the Victorian Regiment

There are a good many young women who seem to think that to ‘keep company’ with, and afterwards to marry, a soldier is the acme of bliss. Yet there are but few, indeed, who have the remotest idea of what life as soldier’s wife is like.

While on the one hand, soldiers in the British Army were discouraged from marrying and were required to ask permission before doing so, the army also recognised that women were useful when it came to doing the men’s laundry and sewing and that married men were often less likely to be drunk, delinquent and disorderly. Prostitution often followed military camps, and in the Victorian era, venereal disease was rampant in the larger camps. After the Crimean war, nearly half of the men had to be admitted to hospital for treatment but married soldiers were seldom affected. Still, the army took little interest in the wellbeing of the wives and children of those selected soldiers who were reluctantly given permission to marry and mostly considered them a burden to the establishment.

The number of married soldiers per regiment was limited. No soldier could marry without the permission of their commanding officer and then only if he was of good character, had served for at least seven years and had savings set aside. Of every hundred soldiers, only six would be granted permission to marry, although another nine would marry without leave.

Those who married with permission were said to be on the strength of the army. The wife became part of the regiment and was recognised at the rank of her husband. Families on the strength looked to the military for their support, however they were also subject to army discipline. The wife was expected to maintain their quarters to army specifications and in some regiments, quarters were inspected daily. Wives were required to be respectable and clean and families were expected to attend church every Sunday. Men were obliged to stay home in the evenings when not on duty and passes were needed by any who needed to stay out past ‘last post’. Failure to comply with these standards in any way could result in the wives being ‘struck off the strength,’ and being asked to move out of the barracks.

Soldiers married on the strength of the regiment lived with their wives and children in an area of the barracks set aside for families. Quarters were sometimes only a portion of a large room screened off with blankets, perhaps a hut of about forty feet by twenty feet that might be shared by up to six families. Where separate married quarters existed, these often consisted of only one room, which served the dual purpose of living and sleeping. The army might provide some meager furnishings and household goods such as a table, a stool, a bed and bedding, fire irons and two or three brooms and brushes but the couple would be expected to purchase pots and pans, crockery and other household goods themselves. The married soldier would continue to receive his daily ration of bread and meat but his wife and children would not be allotted any food, although their rations would be available to purchase at reduced costs through the regimental stores. Wives were expected to do washing and mending for the single men of the regiment, and this was considered a privilege because the few shillings that they earned allowed them to supplement their husband’s wages. Washing facilities were often miserable and there was no allowance for soap, bluing, soda or coal and women were expected to find and purchase these necessary laundry supplies on their own. Those wives with the necessary skills would also clean, sew, nurse and teach. Any woman who wanted to find work outside the military, however, had to receive leave to do so from the commanding officer.

When the regiment moved, the wives, boys under fourteen and girls under sixteen were given travel expenses to accompany the soldiers. If the regiment was sent outside of England, however, only a small percentage of the soldiers were permitted to bring their families and there was much competition to be allowed on the troop ship. In some cases, women would stow away to follow their husbands, and in other cases, women who held tickets to board the ship would trade or sell their ticket to another, less fortunate woman. In few cases, those left behind were allowed to remain in barracks where space allowed, but more often, the families left behind had to seek alternative housing at their own expense and many had to resort to the workhouse.

Schools were provided for the army children at nominal cost, and all children were expected to attend. In some regiments, the regiment itself provided schooling for the children but in garrison towns, garrison schools were often established. Schools were divided into ‘infants’ and ‘grown children’s’ schools. The younger children were under the charge of the schoolmistress and learned spelling, reading and singing while their mothers worked in the laundry. Older children were taught reading, writing, grammar, history, geography, arithmetic and algebra by the schoolmaster, and in the afternoons, the older girls would join the infants and learn domestic skills like needlework from the schoolmistress.

Because of the restrictions on marriage, many soldiers were forced to marry secretly and without consent. Their wives and children were said to be ‘off the strength’ and were considered to be of a lower class than the families who were sanctioned. They were not allowed to live in the barracks and if the soldier was transferred to a new station, they had to find their own transportation. When soldiers were sent abroad on foreign service, and indeed about two thirds of their time was spent outside of England, their families were forced to remain at home and were dependent on the parish or the poor union for their very survival.

Whether on or off the strength, the women of the Victorian regiment soon found that they served two masters. The first, their husband, whose first loyalty was to his commanding officer and the second, the military establishment whose reluctant patronage controlled their very existence.

In spite, however, of many seeming advantages which the wife of the soldier enjoys over those of the civilians, we would say to the girl who has her eye on an army marriage – ‘Don’t’.