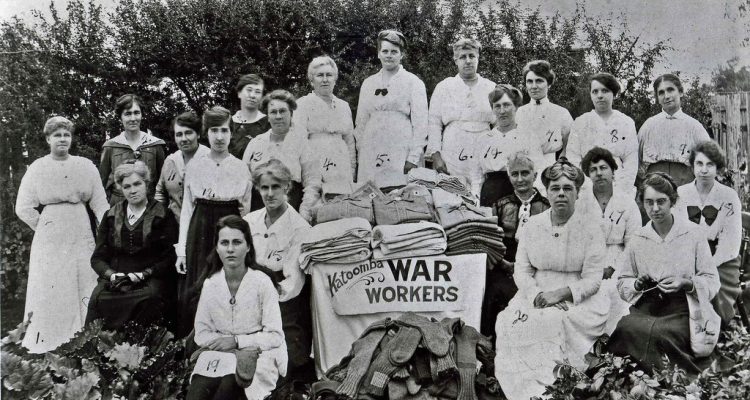 Sharon S Atkins
Occupations
3 8 min read 6939
Guest Post
The following article is a guest post by the talented Sharon S Atkins, author of With A Heart For Any Fate.

The logical starting place to learn about what occupational opportunities were available for women in the early twentieth century is by referring to the data collected during the 1900, 1910 and 1920 Federal Census.  For that reason, I turned to the report, Women in Gainful Occupations, 1870-1920: A Study of Trend of Recent Changes in Numbers, Occupational Distribution, and Family Relationship of Women Reported in the Census as Following a Gainful Occupation. This report was compiled by Joseph Adna Hill and published in 1929.

The information which follows was gleaned and summarized from this study.

The occupations for both men and women classified as non-agricultural were industrial, commercial, clerical and professional occupations.  These occupations were defined as those which provided a means to be gainfully employed.

There was no data collected on any of these Census records regarding employment wages or number of hours worked.

From 1870 to 1920, and with the advent of manufacturing of clothes, occupations for many women went from home to factory and from one type of factory to another.

It should be pointed out that while several conclusions in this report were derived from the Census data, that there were significant differences in how the data was captured from one census to another.  For example, in the 1900 Census there was to be no tabulation of the number of women in any specific occupation; therefore, often, the enumerator may have skipped asking the question.  For 1910 and 1920 census enumerators were required to make an entry in the occupation column.

Because the 1900 Census was taken June 1, the 1910 Census taken April and the 1920 Census taken in January the response given by citizens may have been influenced by the time of year.  For example, fewer workers would be working in agricultural jobs in January 1920 than in June 1900 – due to seasonal influences.

Additionally, perhaps because there was more manufacturing and less agriculture in various regions of the country, occupations tended to be different from one region of the country to another. For example, in the South, due to the larger African-American population, more women were employed as servants, laundresses or farm laborers than in New England.  The report compiler also noted that a higher number of people were employed in the East than in the West; likely due to greater opportunities in the East.

Thus, in reading the following information please note that data was not always compared in the ‘apples to apples’ mode.

The choices of occupations for women were influenced by demand or opportunity as well as by personal preference, qualification by education and natural abilities.  For example, it is likely the development of higher education for women increased the demand for women teachers.

The top 10 number of occupations women listed in 1910 employed 79% of the working women (in order):

The top 10 number of occupations women listed 1920 employed 77% of the working women (in order):

Occupations showing the greatest decline from 1910 to 1920:

Occupations showing the largest increase from 1910 to 1920:

Women likely took more positions in stores, factories and offices as the demand for earlier occupations decreased, such as the number of families hiring servants, or due to:

A small percentage of working women, 12% in 1910 and 13% in 1920, were employed in the category of professions.  They were teachers, trained nurses or musicians and/or teachers of music. An even smaller percentage of women were clergymen, literary and scientific, physicians/surgeons, artists and actresses.

The 1920 Census lists 572 occupations in total.  Only 35 of which did not include women.  However, approximately 200 of these represented less than 1% of the women classified as gainfully employed.  Job tasks varied between men and women.  For example, a woman laborer could be a “sweeper” or “scrubber” whereas a male laborer might be a worker in a steel roll mill.

Conversely, there were 131 occupations that were listed only by a small number of men.

During the early twentieth century, Hill reported in his study that most women held the belief that marriage ‘supersedes or precludes the pursuit of gainful occupation.’  Once married, being employed tended was not thought to be necessary.  Thus, most women did not pursue wage earning opportunities and 91% of the married women were not gainfully employed.

Of those married women who were employed a larger percentage were younger women.  Women were marrying at a younger age and perhaps felt working could enable an earlier marriage rather than waiting until the couple could rely on the man’s earnings.

Working foreign born women decreased between 1910 and 1920 and increased for African-American women during that time-frame. The percentage of native born married white women stayed the same from one census to the next.

It was also noted in the report that unmarried women included those who were widowed and single.

Interestingly, 42% of teachers lived with a parent(s) and only 4.3% were in a household with a husband.

The greatest percentage of women gainfully employed and living as a boarder worked in a waitress occupation.

A large percentage of widowed African-American women gainfully employed were listed as head of household.

How this information was useful in writing a family history story

Many years ago I came into procession of diaries written by my maternal grandmother, Hazel Hungerford Howland.  These diaries were written in 1908, 1917, 1918, 1919 and 1920.  Within these diaries Hazel records her snippets of her life – rarely in complete sentences.  They mostly reflect factual information such as weather reports, family events, and community activities.

Her entries do reflect her journey from girlhood to womanhood and independence.  They also tell of the challenges she faces in order to pursue becoming a teacher and her five year quest to pass all aspects of the New York State teacher certification exam.  They show her enjoyment of teaching, and in the end, her struggle with the decision whether to change the course of her life and abandon her teaching position.

Over the course of the past two years I transcribed these dairies and took on the task of writing a book to tell the story of Hazel’s life from 1908-1920.  During the course of this particular story Hazel’s home 1908-1917 is the family farm located in LeRay, New York.  She also leaves home 1913 to attend St. Lawrence University and returns after graduation in the summer of 1915.  By the fall of 1917 she has indeed become a certified teacher and is offered a position in Southampton, New York.  From 1917 to 1921 Hazel is a teacher at Southampton High School.

As part of the research process I wanted to know what other options for occupations Hazel may have had, other than teaching.  Other than her obvious passion for becoming a teacher, what else may have been a motivating factor; i.e. in what occupations were women able to be gainfully employed?

Certainly, if you are interested in reading more of Hazel’s story, With a Heart for Any Fate, I encourage you to do so!  The book is available at Amazon.

Passionate about genealogy research and assisting people discover their personal connection to history, Sharon S Atkins thrives on writing the stories behind real people.  Using her thirty-six years of genealogy research experience, Sharon is also the author of genealogy-related educational publications. She is a popular speaker, founder of It’s All Relatives and co-founder of GenBiz Solutions, a board member of APG, the Association of Professional Genealogists, a member of NAGS, the Northern Arizona Genealogy Society and past President of AzCPG, the Arizona Council of Professional Genealogists.