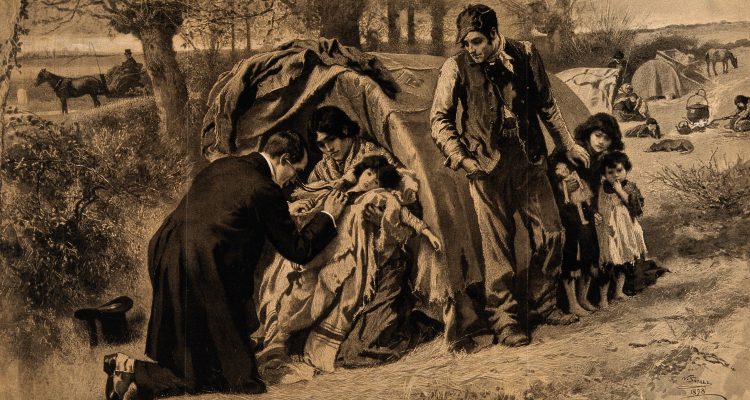 ~Gypsies Tramps and Thieves by Cher 1971

A unique people, the Romani do not have the tradition of a homeland, but rather their culture has a history of freedom and travelling from one locale to another with no ties or origins. They are a tight knit community who are thought to have originated in Northern India, making their way to Europe and then Britain somewhere around a thousand years ago. They have since migrated to the Americas with over a million Roma in the United States and an equally significant number in South America. Today, there are an estimated 12 million Romani or Gypsies living around the world.

The Romani culture values family above all. Marriage often occurs at an early age, and some traditional families still follow the practice of the men’s family paying a bride price to the woman’s family. Their language has its linguistic roots in Sanskrit and speakers often inherit words from the countries they live in making for many different dialects or versions of the Romani language. They follow many religions, from Catholicism and Protestantism to Muslim and Hindi. But despite this diversity, the Romani people have many common customs and are often employed as peddlers or traders of livestock or some other easily transferable occupation.

Although historically, they were sometimes referred to as dirty gypsies by outsiders, in practice, the culture has a long history of strict codes of cleanliness that guide their behaviours and they often regard non-gypsies as unclean. Equally, the gypsies were often regarded by society as tramps and thieves, although in reality, they were under represented in the criminal system.

A farmer considers a Gypsy good watch dog whilst the latter lingers around his premises; but a ‘neighbour’ he looks upon as being well worth watching. 1Sheffield Iris – Tuesday 18 October 1842 – page 3.

The first known Romany Gypsy appeared in Britain in the early sixteenth century. They were distrusted, perhaps because of their foreign appearance, and in 1530, Henry VIII ordered their expulsion from the kingdom and forbid them to re-enter. By 1554, the death penalty was imposed for any Gypsy who did not leave the country within the month.  Despite the persecutions, and the attempts by authorities to regulate the lives of the Romani people, many chose to remain in England, often keeping to themselves in travelling communities who camped in the countryside, away from society’s rules.

In 1881, the following Gypsy family was enumerated during the census in Symondsbury, Dorset. If Charles and Mary Hodges were really only aged 10 and 12 respectively when their daughter Alice was born, this would serve to reinforce the idea that the Romani culture married very early, perhaps even as children:

In 1888, the Gypsy Lore Society was founded in Britain with Mr. C. G. Leland as President and Mr. D. MacRitchie, of Edinburgh as Secretary. The Society published a journal beginning in July of that year, in an effort to circulate accurate information about the Romani and Gypsy Travellers and to dispel the rumours that had been circulating for many decades such as the following account from 1816:

THE GYPSIES. Of late years some attempts have been made to reduce the numbers, or at any rate to civilize the habits, of that vagabond and useless race, the Gipsies. In pursuance of such purpose, society gentlemen have been making all the preliminary enquiries requisite to a proper understanding of the subject. series of questions has been proposed competent persons in the different counties in England and Scotland and answers have been received. Our readers will, we think, be amused with the following specimens of these answers: