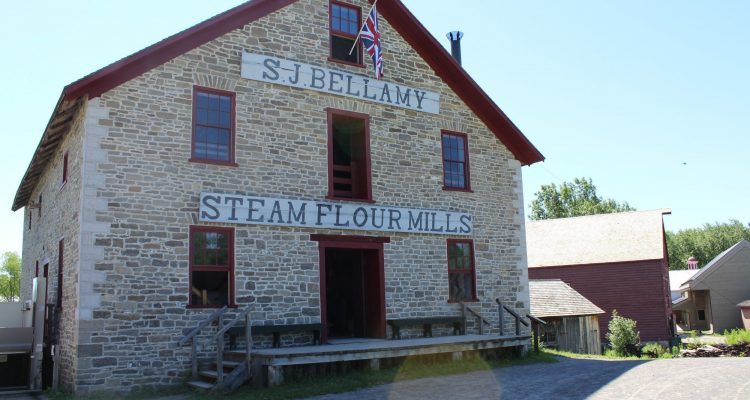 Flour was a very precious staple for our early ancestors in Canada and a flour mill would have been very welcome in any community. Farmers, within a day’s wagon ride of the mill would bring their wheat to be ground into flour. With barter being more prevalent than cash at that time, the miller would grind the wheat and then keep one twelfth of the flour produced as payment for his work, known as the miller’s toll. The draw of the mill would attract other businesses such as inns and taverns, blacksmiths and general stores and villages would grow around the mill.

Born on 27 March 1787 in Vergennes, Vermont, Samuel Josephus Bellamy came to Canada in 1819 with his brothers Edward, Chauncey and Hiram. Shortly after their arrival, Samuel purchased a parcel of land of four-hundred-acres and a saw mill from a man named Daniel Dunham, the original grant holder. The land included water privileges on the South Branch of the Rideau River and, assisted by his brothers, Samuel built the first grist mill in the territory, using two pairs of millstones from a quarry near Brockville. The establishment of Bellamy’s Mill meant that the local farmers no longer had to haul their wheat to Brockville or Prescott to the mills there. By 1825, the mill was doing so well that another pair of grinding stones were added for a finer grind of flour.

On 17 August 1821, Samuel married Anna Phidelia Blanchard, the daughter of John Blanchard, and over the course of the next thirteen years they had six children together.

When Anna died on 22 December 1834, Samuel was left a widower with six children under the age of thirteen. Samuel was very prosperous and had an extended family in the area to turn to, but it was customary for widowers to remarry after a suitable interval and so it was that Samuel married widow Eliza Amelia Giff Keays on 8 September 1837. Eliza had herself been widowed for five years. She had recently lost her son John but her son and daughter were of an age with the Bellamy children.

The Bellamys, by all appearances, were a very close knit family. As the children came of age, they married and the family continued to be very close, visiting each other often. In 1841, Samuel Bellamy took on the job of postmaster in North Augusta, taking over for the first postmaster, James Ross and continued in his appointment until he resigned in October of 1870. 1Library and Archives Canada, Office Name: North Augusta, Electoral District: Grenville-Dundas, PSFDS03-11651, item 21190

The grist mill normally employed two, while the sawmill was operated by one man.

From October 1854 until December 1855, Samuel’s Bellamy’s wife Eliza kept a diary 3The Diary of Eliza Amelia Bellamy, Website of Rod A. MacDonald, Ed.D., http://www.r-a-macdonald.ca/diary_pg_1.htm, accessed 14 November 2015 that detailed day to day life in the Bellamy household. She wrote about visits with family and friends, the weather, and talks about making her own cheese, tomato catsup and apple jelly. Eliza’s love and concern for her family, and especially her daughter Eliza, was very evident in her diary as was her devotion to her religion. She writes of the wedding of Samuel’s youngest daughter Mary Ann to James Dowling in February of 1855 and their move to Prescott, Ontario and of her concern for her daughter Eliza’s health. In June of 1855, she mentions that her daughter’s throat was operated on by Doctor Robert Edmondson, a surgeon from the town of Brockville.

In January of 1863, a fire destroyed the inside of the mill and nothing was saved but within three months, the mill was rebuilt better than ever with the addition of steam power to supplement the water power, allowing the mill to function all year around, instead of just for the four months that the water levels in the Rideau River permitted. 4“Bellamy’s Steam Flour Mill.” Farm Collector. Accessed July 12, 2015. http://bit.ly/1URorvY.

Eliza Bellamy passed away on 7 April 1862 at the age of 64. Samuel Bellamy died ten years later on 19 November  1872 at the age of 84 after a six month battle with heart disease.